Chris Bleich took out his barbecue set: stainless steel tongs, a grill and a smoker. He made his way outside his apartment in University Village to the parking lot where he was met by Tommy DeVito and Dakota Davis, two teammates injured during the 2020 season.

Thousands of miles away from their team, the group watched Syracuse’s away games on a television screen while Bleich cooked.

“We just talked about getting healthy and getting back to playing again,” Bleich said.

Despite also rehabbing from surgery, Bleich wasn’t like the rest of his teammates. He couldn’t play during the 2020 because the NCAA didn’t grant him a transfer waiver — an opt-out of the NCAA’s rule that prohibits transfer students to play in the first season at their new schools. Bleich sat out the entire 2020 season with limited practice reps.

But last weekend — one year, 10 months and two days since he last stepped on a football field — Bleich made his debut for the Orange. He earned a starting spot on an offensive line that hopes to rebound from last season, when the unit was ranked 113th out of 127 teams in the FBS, according to Pro Football Focus.

Bleich’s introduction to football happened out of necessity, his dad Walt said. As a kid, Bleich tried motocross and wrestling, but he “outgrew” the bikes and the mat. Football was a sport he had no experience in, but Bleich started to lift with Walt when Bleich was in seventh grade.

Under Wyoming West Valley High School (PA) head coach Pat Keating, Bleich improved a lot in his opening months as a freshman. He worked on his strength during the weekends and after weekday practices with his dad, and he practiced under the guidance of retired coaches from his high school conference — all of whom had had college coaching experience.

By his junior year, Bleich was stronger and bigger than the majority of the conference. In one game, Bleich clung on to a defender in front of him, dragging the opposition through the back of the end zone and onto the track. Keating said it reminded him of the scene from The Blind Side where Michael Oher did the same thing.

“That’s just a testament to the way Chris plays the game, he always goes through the whistle as an offensive lineman,” Keating said. 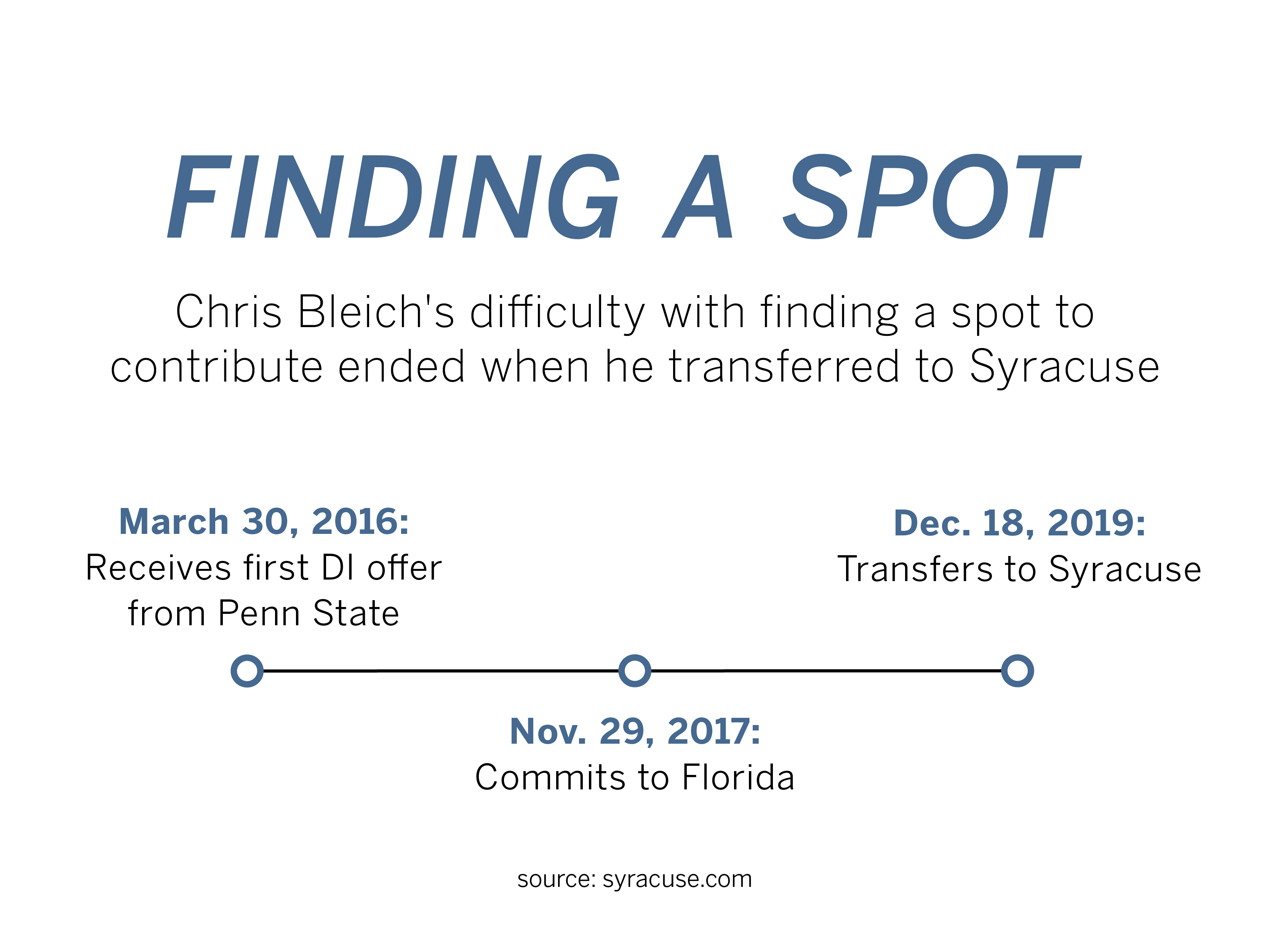 After his junior season, Bleich felt he needed to challenge himself against “elite caliber athletes.” He transferred to IMG Academy in the spring of his junior year, expecting to stay in South Florida for the remainder of his high school career.

But it didn’t work out as Bleich had planned, Keating said. Bleich — 1,000 miles away from home — returned back to Pennsylvania after not enjoying daily life at IMG, Keating said.

“The picture that IMG painted of daily life there at the school was a little bit different than what they told him,” Keating said. “He played out the semester and felt that it was better for him to come back home.”

Bleich finished his high school career ranked the 19th-best offensive lineman nationally, according to ESPN, and he earned 17 offers from Division I schools. He chose to return to Florida, this time for the Gators, and redshirted in 2018.

In 2019, Bleich started eight games at right guard for a Florida team that finished the season 11-3. But again things didn’t pan out as Bleich expected in Florida.

“I remember starting my first game at Florida and thinking it’s going to be a fun four years here, and then eight weeks later, I was in the transfer portal,” Bleich said.

Bleich said in an interview with syracuse.com that he was pressured into playing through hip and groin injuries throughout the entirety of the 2019 season at Florida. After the season he repeated a decision he made three years earlier and transferred.

Keating said Bleich’s decision to transfer in college was different than the one he made in high school since Florida didn’t provide him the proper environment to grow as a football player. Like high school, he wanted to be closer to home, Keating said. He went to Syracuse, the first school to extend an offer and one just 160 miles from his hometown.

But after arriving in Syracuse, the NCAA did not grant Bleich a transfer waiver. Due to COVID-19, the NCAA cleared around 250 players, Bleich said, but he was one of roughly 10 that wasn’t cleared.

Bleich said that, during this time where he wasn’t playing, he was in the “darkest moments” of his life, and in need of emotional support. Keating and Bleich’s parents consoled him, offering advice about getting through the difficulties of transferring and having to sit out for an entire season.

“My first year here, I didn’t really feel comfortable at all,” Bleich said. “I felt like I didn’t have a home at first because I didn’t get to spend any time with the guys or anything, and I was in a dark place.”

He showed a little promise in eight or ninth grade. That’s when we kind of started concentrating on football.

So, Bleich turned to faith, “praying a lot” throughout the season. He said there were a lot of times where he almost gave up and went home, ready to throw away his college career. All he could do was wait until the next spring, when he would finally be able to fully participate in team activities.

Walt said he told Bleich to try and focus on finishing his rehab from hip surgery to speed up the time until he was cleared to play again. During the 2020 season, Bleich joined Zoom meetings and attended practices when he was allowed to.

“It’s hard when you can’t do something you love in life,” Walt said. “He was just trying to do what he could with the offensive line that would help him out and help some of the people that were on the line out.”

Bleich said he finally felt “comfortable” in the spring after completing rehab and gaining eligibility to participate in team activities. The team was able to move away from Zoom meetings and resume in-person activities like run throughs and positional group meetings. There was also a change in coaching, and new coordinator Mike Schmidt brings a toughened “intensity” to each practice. After earning the starting role at left guard, Bleich said he became emotional.

“The two years kind of went by and it kind of just hit me,” Bleich said. “I actually had to cry over it last night just seeing the depth chart that was released, finally getting to work into a starting spot after so long.”

Last week, Bleich traveled with the Orange to an away game for the first time since playing with Florida — this time stepping on the field in a different shade of orange and white.

The Orange defeated Ohio 29-9, and Keating said Bleich graded out well by making key blocks paving the way for running back Sean Tucker to earn a career-high 181 yards in 25 carries.

After the game, Bleich sprinted toward the away side bleachers and leapt over the railing to greet his parents — Walts’s favorite play from the night.

“That jump was pretty impressive, I’m still impressed by that one,” Bleich said.

The post The wait is over. Chris Bleich fulfills a new role in SU’s offensive line. appeared first on The Daily Orange.