ATHENS, Ohio — The consensus about Syracuse’s offensive line was clear before Saturday’s season opener at Ohio: players and head coach Dino Babers said it was much improved.

On Tuesday, Babers said he was more comfortable with this year’s offensive line group. Offensive lineman Airon Servais said that that’s because they have more depth at the position. No one’s out for the year at this time, unlike in 2020. New offensive line coach Mike Schmidt brings a “certain swagger” to the room, Babers said, and has made the group tougher than it previously was.

Quarterback Tommy DeVito said having more trust in this year’s offensive line has allowed him to improve his pocket presence. Servais and Chris Bleich said Tuesday that a lot of the team’s emphasis through spring ball and training camp has been on improving run-blocking. They’ve focused on “technique-driven” drills for every running style, including inside zone, outside zone and gaps, Servais said.

“It contributed a great deal,” Babers said when asked about the offensive line after Syracuse’s 29-9 win over Ohio. “To have those guys out there, working together — and they’re still not completely at complete strength, but boy did they do a nice job.”

Running back Sean Tucker ran for a career-high 181 rushing yards, and Syracuse notched its most yards on the ground since November 2019 against Duke. Tucker credited his offensive line, who he said opened “a whole lot of holes for me” by getting good blocks and allowing him to get to the “second level.” Tucker broke free multiple times, rushing for 15+ yards on three occasions against the Bobcats. Running the ball in the first half helped tire out the defense, which opened up more holes to continue rushing in the second half, he said.

“That was one of our biggest weaknesses last year, and we just really want to be able to pound the ball down anyone’s throat and have our running backs rush for 250 yards per game,” Bleich said on Tuesday before the game. 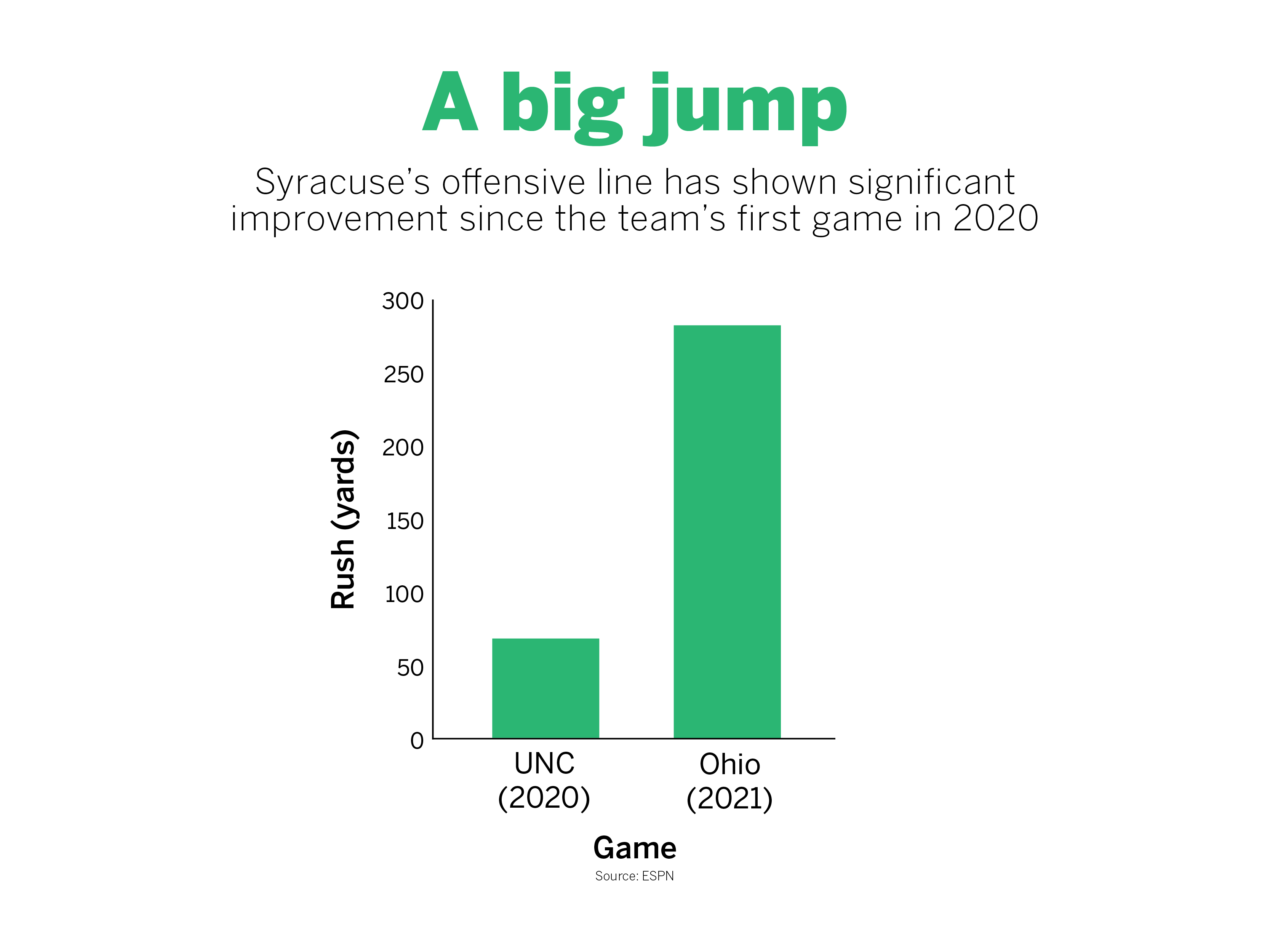 Last season, the Orange struggled with injuries on the offensive line, and fullback Chris Elmore had to fill in. DeVito said that “Rhino (Elmore) played his butt off, but he’s a better fullback,” so it feels more comfortable to now have true offensive linemen in front of him. In 2020, Syracuse’s offensive line ranked 113th out of 127 Football Bowl Subdivision programs, according to Pro Football Focus.

“We had a chip on our shoulder to play more aggressive and physical, and I think we showed up,” Bleich said after the game.

There are things the offensive line will need to correct week to week on film, but the most important takeaway from Saturday’s win is that the group was “gelling” and it’s another year of experience under their belt, DeVito said.

Throughout training camp, Syracuse’s players repeatedly said the offensive line was communicating better and had been working on issues that held it back last season. Defensive lineman Josh Black said going against his offensive line every day made him better — the sixth-year senior also called this the best training camp he’s been a part of. It was clear the line had come a long way since last year, and they just needed to prove that against Ohio, Bleich said before the game.

The unit was optimistic because it has been far more consistent than last year, Bleich said. Against Ohio, Bleich said the Bobcats used a lot of double-teaming before the ball was snapped, which required strong communication between him and others on the line to switch in a split second. “We were able to execute that throughout the day,” Bleich said.

Bleich, who hasn’t played in a game in nearly two years after transferring from Florida and being forced to sit out last season, said the first thing he did after the win was jump over a wall between the stands to go hug his parents. He laughed as he said that he was surprised he didn’t hurt himself coming down from the wall.

“Ohio’s a great team, but (the) Big Ten is usually a little tougher competition,” Bleich said. “So if we can keep doing this week in and week out, then we’ll be able to finally say we actually did it.”

The game was won when…

With just over two minutes left in the third quarter, Ohio was on the edge of the red zone following an eight-play, 60-yard drive. The Bobcats trailed by nine points, with a chance to cut into Syracuse’s lead heading into the fourth quarter. Mikel Jones made a tackle on third-and-long to force fourth-and-3 yards to go, and Ohio elected to go for it. Bobcats wide receiver Jerome Buckner seemed to secure a catch for the first down, but true freshman Darian “Duce” Chestnut made immediate contact and popped the ball loose to force a turnover on downs. Syracuse answered with a touchdown, stretching its lead to 16 and putting the Bobcats out of reach.

Quote of the night: Dino Babers on Duce Chestnut

“His first play was not that good. I lost my voice over his first play, and I’m like, you can’t do that. I said some things — all nice, it was all nice, but very highly motivated. But I’ll tell you what, you can poke that bear and boy did he come around and start playing. I’m not sure I’ve seen a better opening day performance.”

That’s Syracuse’s best game on the ground since a 49-6 win over Duke in November 2019 when the Orange had 286 rushing yards. Sean Tucker ran for a career-high 181 yards and one touchdown on 25 carries, and the Orange found a lot of success with the read-option offense. DeVito ran for another touchdown and 49 yards on seven carries, and the talk about SU’s improved offensive line and running game seemed justified — at least for now. 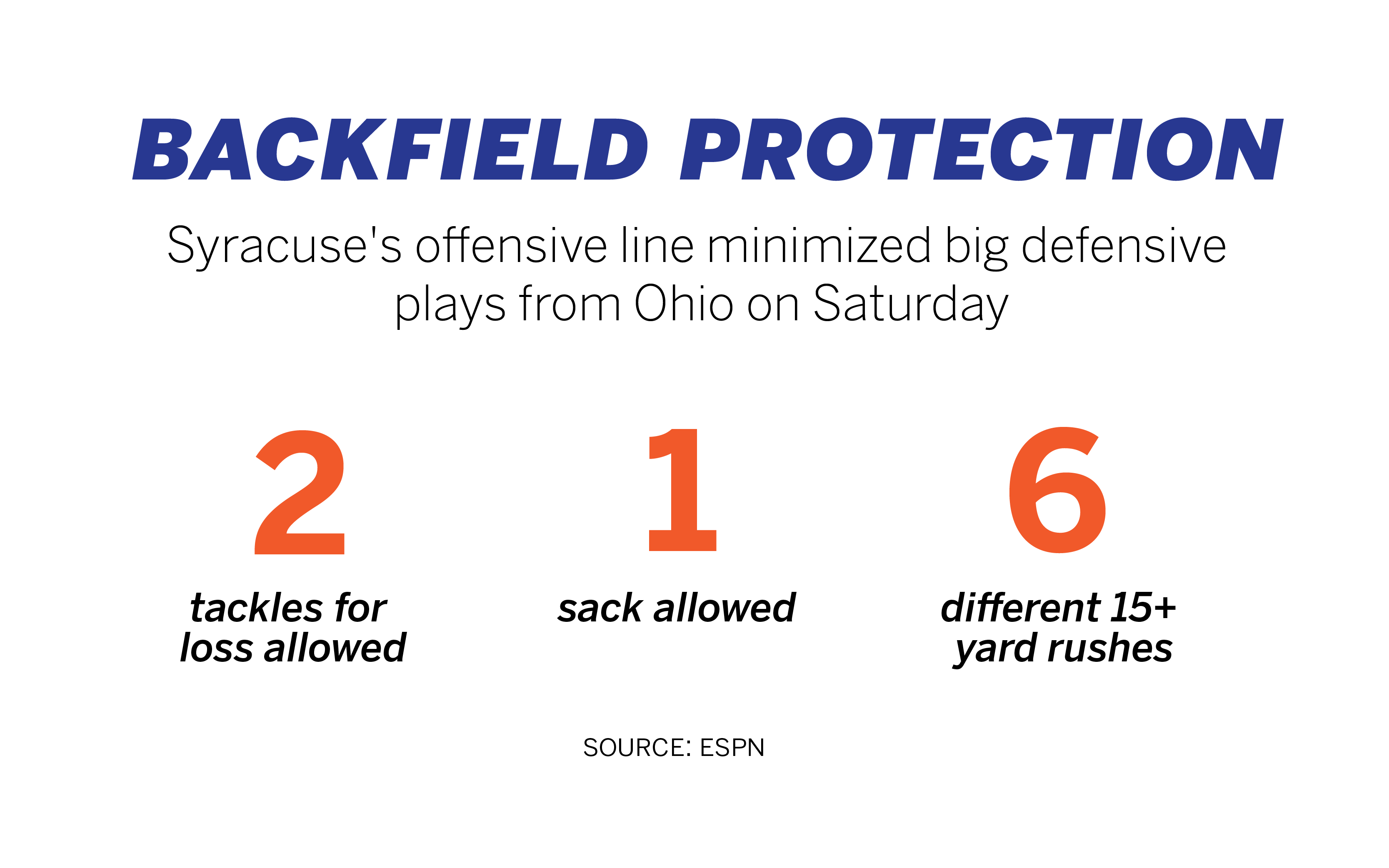 Chestnut dedicated his impressive collegiate debut to his friend from Camden, New Jersey, who died this week. The true freshman cornerback recorded eight tackles and an interception during his debut. Babers said that he yelled at Chestnut for failing to wrap up on a tackle early in the game, but the defensive back followed that up with a strong open-field tackle, which earned a thumbs-up from his head coach. The interception was the perfect ending for Chestnut, who snagged an overthrown pass one-handed.

“I’m not sure I’ve seen a better opening day performance, especially with how many tackles he had,” Babers said. “He really did make big tackles in crucial situations.”

Count this with a grain of salt. This Ohio team might not be quite as good as we thought it’d be. Babers said postgame that Ohio was one of the best teams in the Mid-American Conference and that the Bobcats will compete for the championship, because of their physicality. They were a difficult team to beat, he said postgame and multiple times ahead of Saturday’s matchups. There’s no doubt a 20-point win looks good for the Orange, but they aren’t in the clear yet. It’s hard to determine much from a season opener, especially one against a MAC opponent. Though Syracuse looked good, it’ll have much tougher competition further down the road that’ll be more telling on how much — or if — this team has improved since going 1-10 last year.

“The competition level steps up, and we’re going to have to see how we do against higher competition,” Babers said after the game.

Special teams U. Andre Szmyt is one field goal away from tying Syracuse’s record for makes and two away from breaking the record. He knocked through his only two attempts on Saturday from 20 and 29 yards. Syracuse returner Trebor Pena looked good on punt and kickoff returns, setting up the Orange offense inside the Ohio 30-yard line with a 32-yard punt return during the third quarter.

Also on special teams, Syracuse’s newest punter James Williams punted twice for 75 yards, pinning Ohio inside the 20-yard line on both attempts. When asked about SU’s specialists ahead of the game, Babers said that “there’s nothing spookier than a freshman in his first game.” He said the team expects “big things” from Williams.

The two quarterback system. Babers said ahead of the season opener that Syracuse would use a two-quarterback system that featured both DeVito and Garrett Shrader. Saturday, that wasn’t really the case — Shrader didn’t appear until the final drive of the fourth quarter when it was clear that SU had already secured the win.

Babers said he spoke with DeVito and Shrader on the sideline and told the latter that they’d get him into the next game. Despite a stat line of 11-of-17 for 92 yards passing, Babers was excited about DeVito’s performance, he said.

“We just felt like he was doing extremely well. He had a feel for what the heck we were trying to do,” Babers said of DeVito.

The Scarlet Knights return to the Carrier Dome to play Syracuse for the first time in over a decade. It’ll mark the return of a long-renowned Big East rivalry and the return of head coach Greg Schiano, who built Rutgers into a powerhouse during his tenure between 2001-2011. Rutgers won its season opener in a 61-14 thumping of Temple on Saturday. The Scarlet Knights also won three games during the 2020 season in an entirely Big East schedule, including over Michigan State, Purdue and Maryland. Syracuse will have a taller task on its hands for its home opener this Saturday.