In 1986, Hobart and Syracuse faced off for the 72nd time in 70 years, but the stakes were different for both sides. Simmons Jr. and then-Syracuse athletic director Jake Crouthamel had created the Kraus-Simmons Trophy, honoring Simmons Sr., Kraus and the “familial” connection between the two coaches.

“We were talking about reminiscing about the old coaches who played against one another and for the institutions,” Simmons Jr. said. “We decided to make a trophy with their name on it.”

Syracuse has dominated the rivalry, and the trophy created for it, losing only 26 of 107 games against Hobart. Since 1916, the two teams have played in all but six years — including last year, which was the first time since 1961 the game hadn’t taken place. On Sunday, the Orange beat the Statesmen for the eighth straight time 18-16.

But in the first edition of the battle for the Kraus-Simmons trophy in 1986, SU didn’t come out on top. Hobart upset then-No. 1 Syracuse, winning 16-13 at Boswell Field in Geneva, New York. More than 8,000 fans were in attendance at a stadium that only sat 4,500, according to The New York Times, and the Statesmen won for the 10th time in 15 years. “They had a very powerful team,” Simmons Jr. said about the loss.

Hobart was a Division III school until 1995, with one of its Division I matchups each season always slated against the Orange. Simmons Jr. said that made the rivalry a “big thing” for the Statesmen, since most Division I and Division III teams usually didn’t play each other.

But after the loss in the trophy’s inaugural game, Syracuse only dropped two matchups over the next 33 years, winning the next 19. Current head coach Gary Gait was a player for four of those victories, scoring seven goals in the 1980 contest.

“It always meant something. You weren’t just representing Syracuse, but the coaches who built the program,” Gait said.

After Hobart won 13-12 during the 99th matchup in 2013, the Orange won by at least six goals in every game until this year’s matchup. Simmons Jr. said this year’s SU team is still “growing” following a couple of thin years and a large graduating class leaving last season.

“We used to be No. 1 or No. 2 in the nation year after year,” Simmons Jr. said. “That won’t happen for a while, but we need to build back up to stay strong in the ACC.”

Syracuse let Hobart, which entered this year’s game with the ninth-best scoring offense nationally, jump out to an early 2-0 lead in the first period. Brett Kennedy said there was “blood in the water” with SU on a three-game losing streak heading into the game, and the early lead showed that Hobart was ready to take advantage of the Orange’s struggles.

But Brendan Curry and Kennedy said the fifth-year players had “extra motivation” to win the game with the team’s director of operations, Roy Simmons III, on the sidelines. They understood the importance of the trophy named after Simmons III’s grandfather, and launched a comeback. 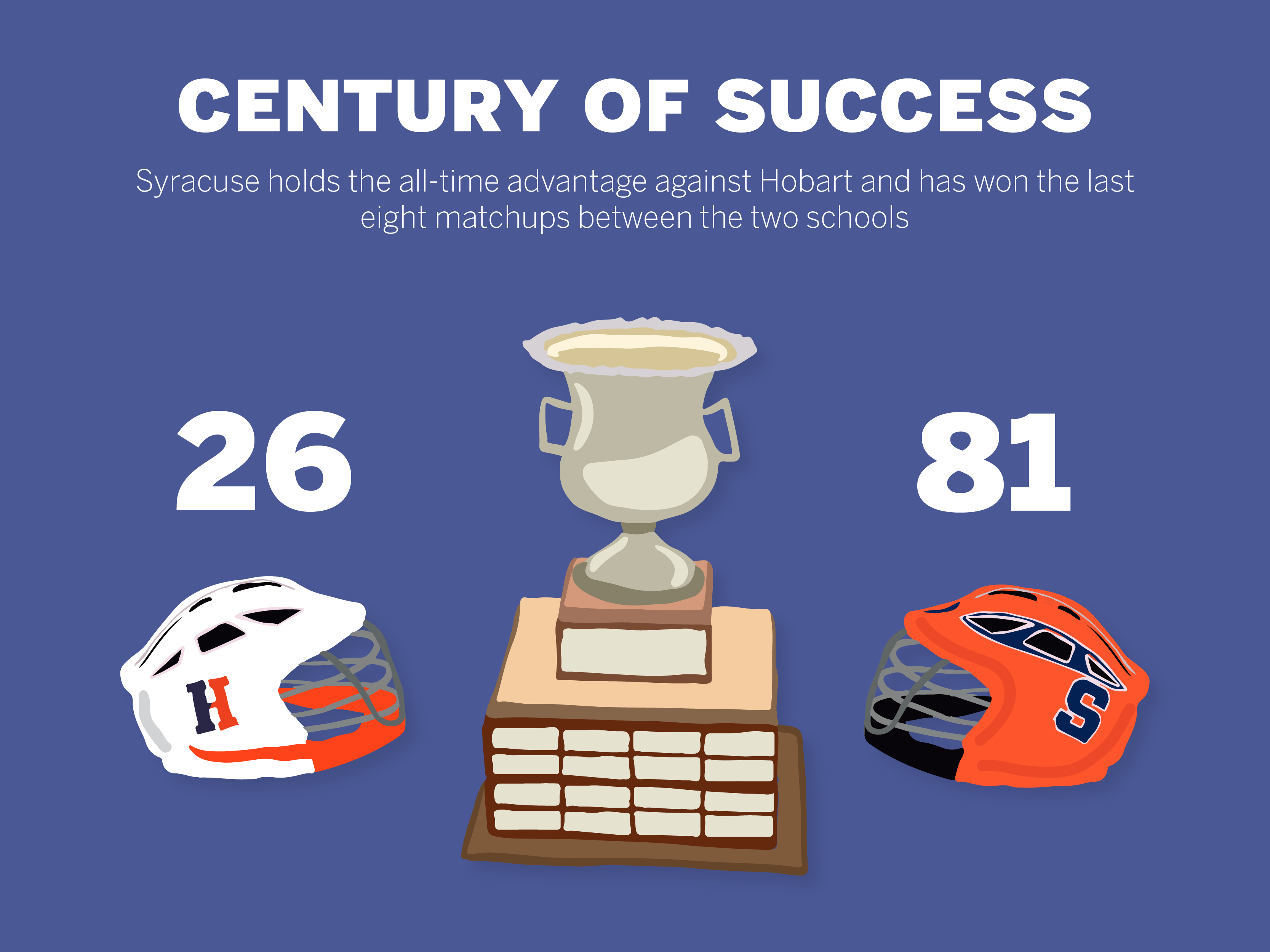 “I don’t know how many more times he’ll have the opportunity to be on the sidelines with us before he hangs it up and goes on a vacation with his wife,” Kennedy said about the 63-year-old Simmons III. “You get a sense about how much it means, and we just had to echo that to the younger guys.”

Curry and Tucker Dordevic led the Orange throughout the rest of the game following a dismal opening period. The two combined for 13 points, with Dordevic scoring four goals in the second frame and Curry connecting on the final dagger to secure the win with 12 seconds left.

The trophy itself was brought out 35 minutes before the game, sitting off the field near the midfield line while both teams battled for it. A decorated silver cup with both school’s names sat atop the trophy with a description of the impact Simmons Sr. and Kraus left on both programs written on a wooden base directly underneath.

Under the description, 15 small silver plates fill up each of the four sides on the trophy, listing each game’s score and year from 1986 to 2020. Two sides of the base have been completed, but Syracuse’s 2022 win will be added to the third before next year’s game.

After the win, the Orange’s entire team waited for Simmons III to lift the trophy up from the turf. He received a resounding cheer from the stands before turning toward his dad Simmons Jr., who watched SU beat Hobart for the eighth straight time from the last row of the press box.

“When you hoist up the trophy, all that matters is that it says ‘Syracuse’ on it,” Gait said.

The post The history of the ‘familial’ Kraus-Simmons trophy Syracuse dominates appeared first on The Daily Orange.