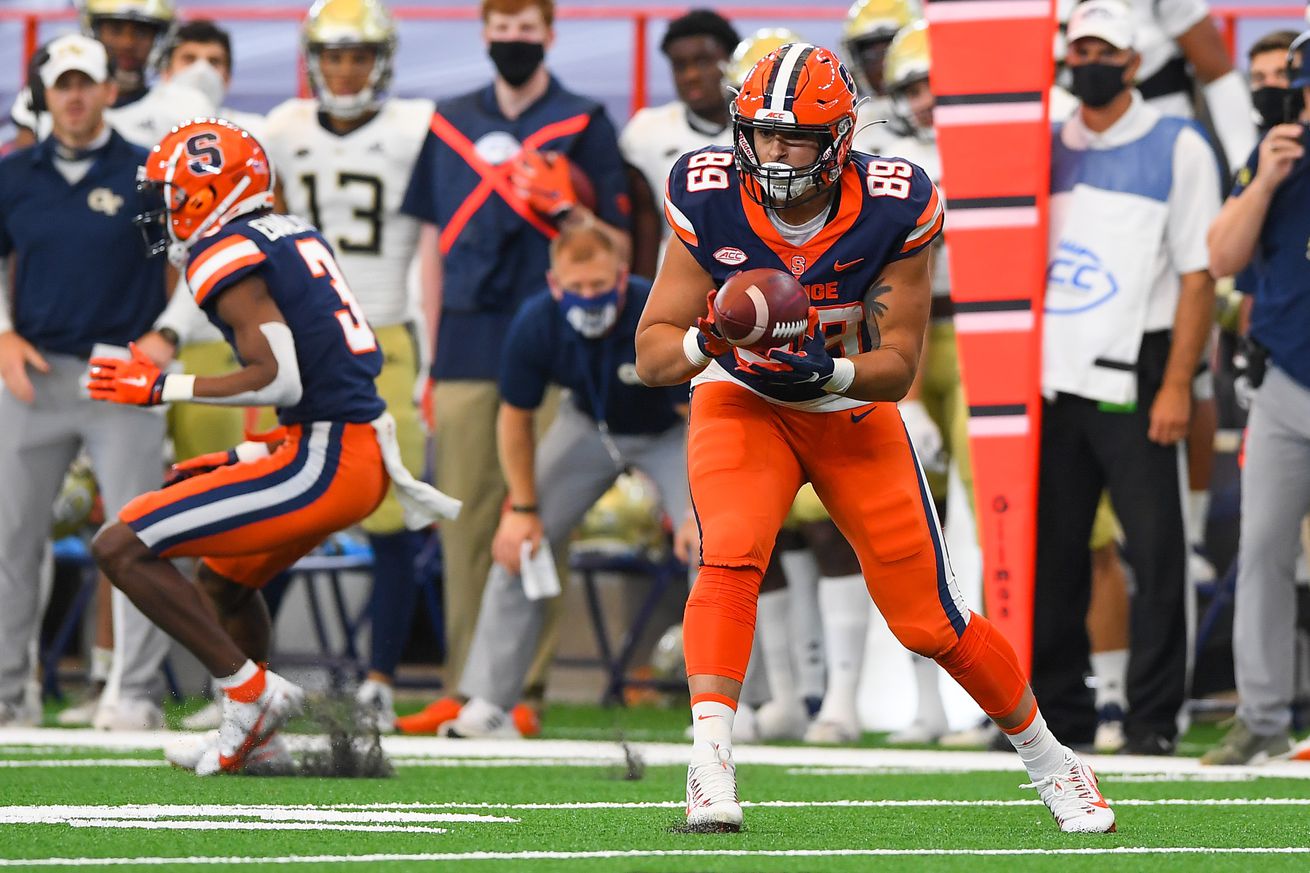 However, Syracuse fans haven’t been the most impressed with the style of football that the offense has been running in 2020. The fast tempo and speed that defined the Orange offense during the first years under Babers have seemingly slowed down. Not all of the blame can be placed on the players. Some of the fingers have been pointed at the coaching and play calling of Gilbert.

One unit in particular has been quiet the entire year. The Syracuse tight ends, Aaron Hackett and Luke Benson, have a combined two receptions for 11 yards. Both of those catches came in SU’s latest game against Georgia Tech. Unless you’re Travis Kelce or George Kittle, tight ends aren’t usually seen as a high priority target in the receiving game, so for outsiders, those numbers might seem reasonable. However, Syracuse’s tight ends can be difference makers.

Hackett and Benson entered the new year as two of Syracuse’s more prolific receivers. Of the players returning for the 2020 season, the two ranked second and third respectively in receiving yards behind Taj Harris. Hackett had 205 yards while Benson had 176 yards. What is perhaps more impressive is that Hackett is SU’s leading returner in touchdowns with six. Benson follows closely behind in second place with three scores.

Given those numbers, it seems rather odd, peculiar, and wrong that the pair only barely have enough yards for a first down between them. Even if a new offensive coordinator with no previous knowledge of how new players actually play comes into the fold, it’s probably unwise for that person to ignore a part of the team that has found prior success.

So is that on the players or on the system they’re playing in? Prior numbers might suggest that it’s the system to blame for the lack of production from the tight ends. Below is a table of all of the listed tight ends on the rosters in which Gilbert was an offensive coordinator or head coach. Included are the games played, catches, receiving yards, and receiving touchdowns recorded by each tight end.

What we can deduce from these numbers is that while there are some instances in which tight ends found success in a Gilbert offense, more often than not those players did not record numbers like Hackett and Benson did last season. In fact, only two tight ends that played for Gilbert – Sam Hendricks for Eastern Illinois in 2012 and Mitchell Wilcox for South Florida in 2018 – recorded more receiving yards than the two Orange tight ends did in 2019. In five of Gilbert’s eight seasons in the college game as an offensive coordinator and a head coach, his tight ends combined didn’t record more than 100 receiving yards.

The touchdown numbers for Gilbert’s tight ends might be more worrisome. Not a single group of tight ends coached under Gilbert have recorded more than two touchdowns in a season. Hackett and Benson scored nine for Syracuse in 2019.

Keep in mind that this isn’t a Babers problem. Remember Ravian Pierce? Babers brought him into the program in 2017 and Pierce proceeded to rack up 368 career receiving yards and seven career touchdown receptions. Combine that with what Hackett and Benson did in 2019 and that should prove that Babers sees his tight ends as an integral piece for offensive success.

But neither of the SU tight ends have done really anything this year. It seems that the pair are more used for blocking than for route running, which would be an unfortunate waste of skill, especially for Benson. He’s one of the fastest guys on the team and given that all three of Syracuse’s receiving touchdowns in 2020 have been due to receivers beating the coverage on streak routes, it would make sense that Benson could be used in the same light. In fact, Benson’s first career touchdown fits that profile.

There were some concerns from fans about the lack of usage from the tight ends against UNC, but that might have been considered an off day and the next couple of games would showcase them more. But three games into season and the talent that is in that position is not being utilized. That might be a big mistake.

Don’t forget that Syracuse’s receiving corps is not what you would label as experienced. Apart from Harris, Nykeim Johnson, and Sharod Johnson, every Syracuse wideout listed on the two-deep this season is either a freshman, redshirt freshman, or a redshirt sophomore. That also comes with the caveat that Sharod Johnson only had eight career catches coming into the 2020 season.

Perhaps the lack of experience available to Tommy DeVito is hurting his passing numbers. The Orange quarterback has targeted Harris and Nykeim Johnson with the majority of his passing attempts. The versatility that is available to DeVito should increase with increased incorporation of Hackett and Benson. DeVito has relied on streaks and slants to move the ball through the air. Hackett and Benson have shown in the past that they can run a variety of routes that can help open up the offense and bring back its trademark speed.

It’s unclear how much a lack of spring ball hurt the integration of Gilbert’s scheme into SU’s current offensive personnel. Likewise, there isn’t an all-22 camera available to study if the few routes that Hackett and Benson have been on this year have been well-covered or not. But the seemingly lack of will from Gilbert to use some of Syracuse’s more prolific receiving options more often could be a costly error.

Hackett and Benson have proved that they are very useful when used in the aerial attack. As mentioned above, Benson is probably more suited to use in the passing game, but Hackett has enough pedigree behind him to warrant his inclusion in more routes. Both of these tight ends are built to be more utilized in the passing game, and more receiving-minded tight ends are on the way.

Steven Mahar Jr. and Landon Morris have been labeled as H-tight ends whose skill set suggest that they should be sent out on more receiving routes instead of being given more blocking assignments. That is what Hackett and Benson are currently tasked with doing for most of the game – blocking. But given the lack of offensive efficiency against tougher opposition, perhaps an extra blocker won’t help out DeVito as much as an extra capable receiver would.

The Syracuse tight ends have been grossly underused in the receiving game this season. They’ve proved that they are a valuable asset to the Orange and the fact that they’ve received minimal targets from Gilbert’s play calls is disappointing. With the talent that is already in place and that is coming in the future, their inclusion into the offensive can is not just warranted.