As Josh Mballa left the Texas Tech Rec Center, wrapping up treatment, or homework, or some other task in his routine he can’t remember, the then-freshman’s phone buzzed. Max Lefevre, a Red Raiders’ staff member, needed him to come to Chris Beard’s office.

His initial plan had been to play pickup with a pair of teammates, one month removed from the Red Raiders’ run to the National Championship in 2018-19 and nine months since Mballa first arrived in Lubbock, Texas. He hadn’t played much that year — just 17 games, 13 total points and two minutes the entire NCAA Tournament.

It felt “a little bit frustrating” to play so little, he said. It felt like the role he was pitched during the recruiting process hadn’t materialized. It felt like what he ended up doing — prepping Texas Tech’s starters during practice so they could get better and help win games — was a good experience only because he had no other choice but to call it one.

So when Mballa walked into Beard’s office, he wasn’t surprised to hear it’d be in his best interest to transfer. The head coach said he didn’t envision Mballa’s role to be much larger than the previous season, even though he wouldn’t be surprised if Mballa “transferred to another school and (became) a big player,” Mballa recalled. Beard left his office, leaving Lefevre to walk Mballa through his options.

The first would’ve been to abandon Division-I basketball and play professionally overseas, maybe somewhere near Mballa’s hometown of Bordeaux, France. The second — which he initiated soon after — was to enter the transfer portal. He ended up at Buffalo, where Mballa became one of its primary post players and grabbed 308 rebounds as a sophomore, the most in program history in more than 40 years.

Heading into Saturday’s game against Syracuse (5-1, 1-0 Atlantic Coast), Mballa has carved out a role, a freedom to play with the style that brought him to the French national team and a championship-winning program at Putnam Science Academy in Connecticut.

“That’s a tough thing for a whole year, sitting the bench and all that,” said Tom Espinosa, Mballa’s head coach at Putnam. “It fueled his fire a little bit, getting to Buffalo, wanting to prove a lot of people wrong.” 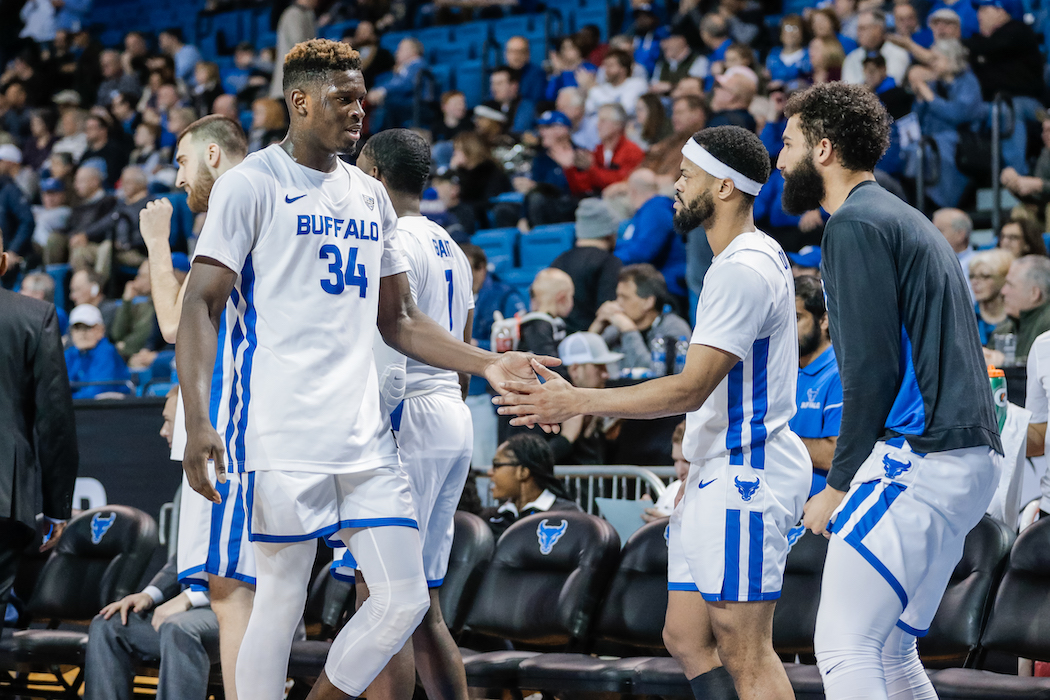 At UB, Josh Mballa had 308 rebounds during his sophomore year, the most in more than 40 years for the Bulls’ program. Courtesy of Paul Hokanson | UB Athletics

He started the Bulls’ first 20 games in 2019-20, came off the bench in the last 12 and earned a spot back in the lineup this year. But plantar fasciitis, inflammation in the bottom of the foot, forced him to miss three games before returning earlier this week. He attempted a layup early in the first half of UB’s season-opener, felt a “pop” in his heel and hobbled around in a boot postgame.

The next few weeks consisted of exercises with Associate Head Athletic Trainer Andrew Bliz in the training room, trying to strengthen that foot bit by bit, and film breakdowns to maintain his jump shot footwork and defensive stance. They’d been focus points since he arrived in Buffalo.

He’d watch film in assistant coach Angres Thorpe’s office and figure out how he could shoot better on the move, how he could perfect the right stance and not gamble in UB’s man-to-man defense, how he could take snippets of what he’d developed for years — in France, at Putnam — and channel it into his final two collegiate seasons.

“We think he has a chance to be another one of the great defenders that we’ve had in our Buffalo program,” Thorpe said.

But Mballa’s path to that point hadn’t always been linear. He started playing competitive basketball at 8 years old when he and his mother moved from Detroit to Bordeaux, where most of their family lived. An uncle knew Vincent Mbassi, a basketball trainer with Kameet Academy, and asked if he’d teach Mballa the game. Mbassi and Mballa trained together everyday with other future Division-I prospects, often cramming three after-school workouts at their middle school and club team, as well as Mbassi’s academy.

That’s a tough thing for a whole year, sitting the bench and all that. It fueled his fire a little bit, getting to Buffalo, wanting to prove a lot of people wrong.

Kentucky’s Olivier Sarr, Gonzaga’s Joel Ayayi and Nebraska’s Yvan Ouedraogo all worked alongside Mballa on handling the ball, shooting, sprinting up and down the court, alternating between the left and right hand, executing layups — everything — deep into the night. Mbassi stressed that they needed to learn all five positions, knowledge that Mballa, at the time a 2-guard, needed after filling out his 6-foot-7, 220-pound frame.

“(Mballa’s) just relentless,” said Sarr, the Wildcats’ starting center. “Hunting every shot on the board, grabbing every offensive rebound, going up strong, playing defense one through five. He can handle the ball going on fast break. He can do a lot of things.”

In practice, Mballa learned to operate around other tall post players and get shots off without getting them blocked, Espinosa said. He experimented with up-and-unders, started at power forward and often guarded the opponent’s best player — whether it be a point guard or center — in man defense. When Putnam dropped back into a zone, Mballa led traps and doubles that stemmed out of it.

“I’d always been like a shooting guard, and then, just as I got older, I got bigger than everybody else,” Mballa said. “Then, with my motor, I guess coaches just started putting me at the four, five.” 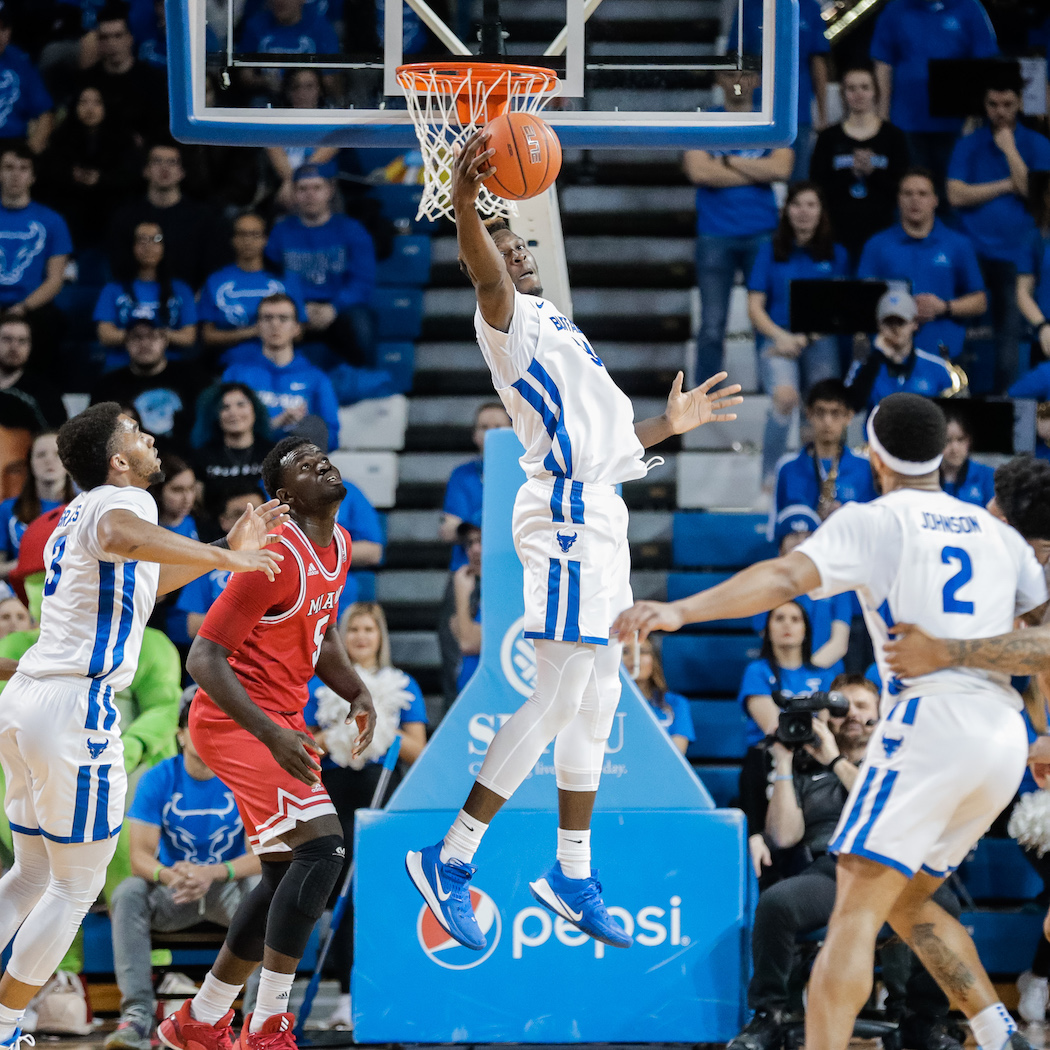 Josh Mballa has the freedom to play his style of basketball in his role at University at Buffalo. Courtesy of Paul Hokanson | UB Athletics

That transition was tough, he said. He still shot 3-pointers and worked on everything he used to as a guard after practice, but he hardly used those skills in games, including those with the French national team in 2016 and 2017. After Mballa stopped training with Mbassi for a two-year period, his jump shot foundation collapsed. Once he went to different teams, coaches told him to use his size, drive to the paint and focus on grabbing rebounds instead.

When Mbassi traveled to watch Sarr last season, Sarr asked how someone could lose their shot, that “perfect” shot, like Mballa did. “I don’t know,” Mbassi replied. The next time Mballa returned home, Mbassi began training Mballa again.

By that time, Mballa had left Texas Tech for UB. His role with the Bulls was starting to take shape into one significantly larger than his the year prior. Before Mballa committed to UB, Beard reached back out and said that, after all, there was a chance Mballa could get minutes. The players he initially filled the post’s depth chart with hadn’t panned out, and since Mballa’s name was still in the transfer portal, he offered a return to Texas Tech.

Mballa had already visited Buffalo at that point. He’d already hung out with the team and coaching staff, went out to dinner, spent the night in a hotel room filled with snacks. Going back to Lubbock wasn’t an option.

The post Texas Tech was unsure about Josh Mballa. Now at Buffalo, he’s a star. appeared first on The Daily Orange.