Keith Allen recalled a game during the 2019 Colorado Fireworks Tournament where Glory Adkins, the travel softball team Allen coached, trailed by two runs heading into the final inning. Tessa Galipeau stepped up to the plate and hit a two-run homer to tie the game, Allen said, and Glory Adkins ultimately won.

A few games later, trailing by one run, Galipeau came through with a solo shot to tie the game. And with a runner on third base later in the game, Galipeau laid a bunt down the first base line to score the go-ahead run for Glory Adkins.

Converting in key situations hasn’t been uncommon for Galipeau, who has become one of Syracuse’s important pieces this season as a freshman, starting in all 16 games so far. She is second on the team with three home runs, 18 runs batted in and a .500 on base percentage that’s fueled by her team-high 14 walks. Galipeau leads all freshmen in nearly every statistical category for hitting, all while maintaining a perfect fielding percentage with zero errors at first base, a continuation of her strong defensive play in high school — when she was also known for her timely hitting and versatility.

In the Orange’s season-opening tournament in Monroe, Louisiana, Galipeau went 7-for-12 with nine walks, three extra-base hits and four RBIs over a five-game span.

Allen said her early success with Syracuse isn’t surprising. Allen typically only took juniors and seniors to play for his team, but rostered a then-sophomore Galipeau, who he said was “very mature for her age.”

“I knew that she could handle it playing as a sophomore on our highest level,” Allen said. “You trust her skill, you trust her in the box, you know she’s going to do what the team needs.”

Alexa Langeliers, a high school teammate of Galipeau, recalled a travel game in fall 2020 when Galipeau hit a walk-off home run against Langeliers’ team, adding to her collection of timely hits. When their Keller (Texas) High School team went to the state playoffs, Langeliers said Galipeau consistently worked walks and executed bunts in key spots to help the team win.

Just as she does at Syracuse, the left-handed Galipeau played first base throughout her first three years of high school. But when she entered her senior year of high school, head coach Christina Gwyn-Barton needed Galipeau to switch to second base.

Gwyn-Barton was cautious not to put Galipeau in a situation where she didn’t think she could thrive. But it hardly took Galipeau more than a day to catch onto her new position, Langeliers said.

Because of her time playing with Glory Adkins, Galipeau’s senior year was not the first time she found herself playing a position other than first base. Allen said her athleticism and arm strength made her “capable of playing basically anywhere on the field.” He had seen Galipeau pitch and catch as well as play various infield and outfield positions. 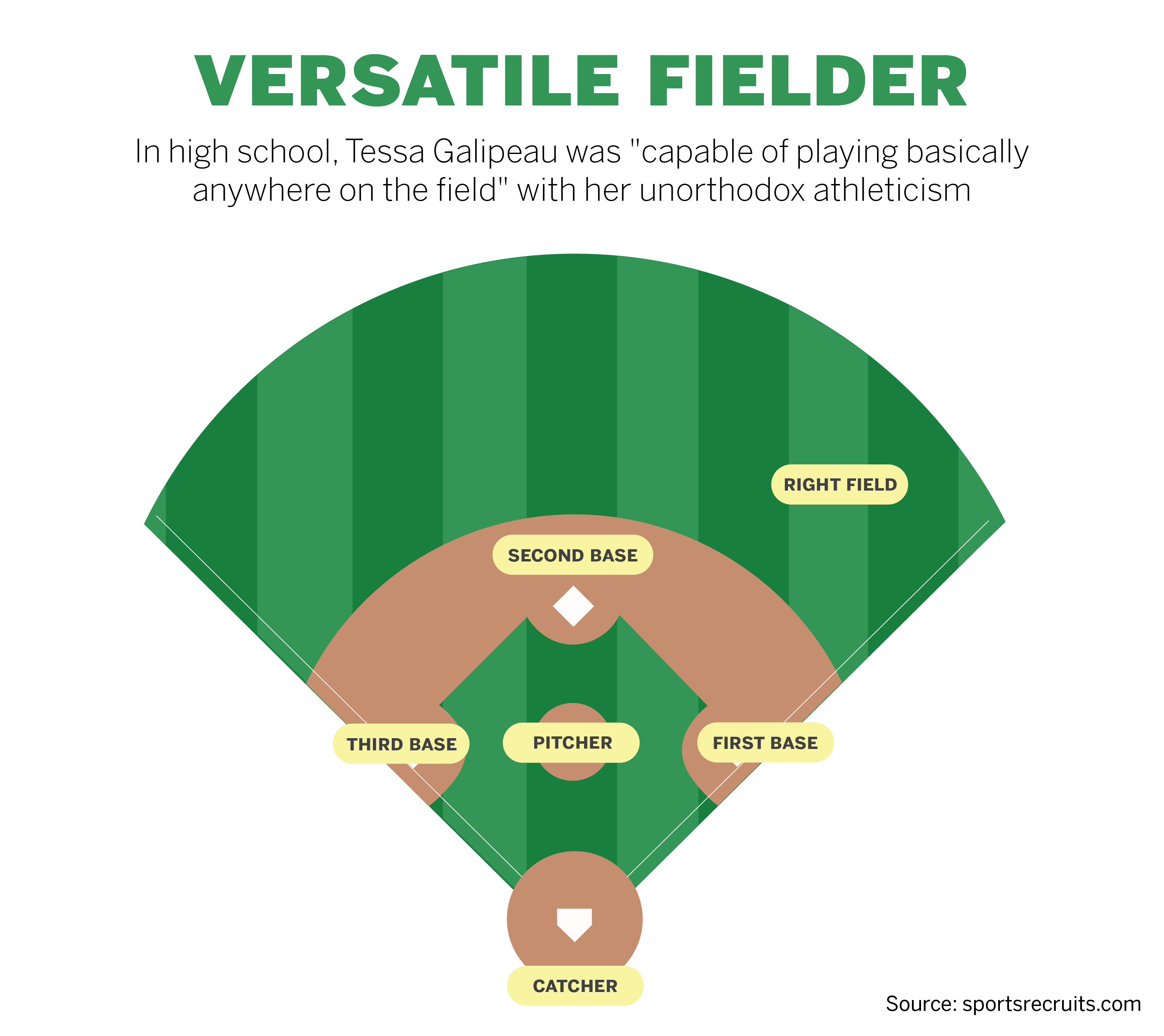 While Allen already knew Galipeau had a strong arm, he said it didn’t truly register with him until a play she made her sophomore year. When a fly ball was hit in the air toward left field, prompting the runner on first to drift a few feet off the base, Galipeau caught the ball and gunned it to first, beating the runner back to the bag to force the double play.

“Tessa took (the ball) and shot it to first to throw her out and I was like, ‘Okay, that’s not normal for a kid who you think is a first baseman,’” Allen said. “A lot of people are a good hitter (but) they’re not athletic so you stick them at first — that’s not the case with Tessa.”

But even with her unorthodox versatility, especially as a lefty, first base remained Galipeau’s specialty. Galipeau is particularly strong at picking balls out of the dirt, Langeliers said. It’s something that can be traced back to Glory Adkins practices, where the team repeatedly went through drills focused on the first baseman scooping the ball out of the dirt, Allen said.
Galipeau’s teammates would position themselves at second base, third base and shortstop, intentionally throwing the ball toward her feet, forcing her to master the glove movements necessary to make the play.

For Galipeau — who has played all 16 games at first base so far this season — it’s an important skill, one of the many she brings to a Syracuse team getting into the heat of conference play.

“A lot of times you have kids who are naturally gifted, so they just go out and they play with the gift that they’re given,” Gwyn-Barton said. “When I look at Tessa, I look at a kid who sees the beauty of the game. She sees the beauty and the hard work and the situational side of it.”