Telly Vunipola hadn’t done technical drills in awhile, but the senior midfielder spent her summer working on them. At Winner Circle Athletics and Wellness Center in Corona, California, Vunipola and other collegiate soccer players Amanda Aleman and Gabrielle Cooper would set down a line of cones, dribble through them, shoot and repeat.

“I just wanted to get back into that,” Vunipola said. “Because after club and high school, you stray from small, basic technical drills.”

Coming off the worst season of her collegiate career at Syracuse, one where she played out of position as a defender and recorded zero points through eight games, Vunipola opted out of the spring season and returned home to Chino Hills, California. Through weekday workouts during the summer, Vunipola honed the power in her shots and crosses as well as increased her stamina.

This season, Vunipola has helped catalyze Syracuse’s best offensive start since 2017, with two goals and two assists in the last seven games. Now playing at midfield on the wing, Vunipola blossomed from two underwhelming years at University of Louisiana at Lafayette to the player head coach Nicky Adams imagined while seeing her in the transfer portal before Vunipola joined Syracuse (4-2-1) last season.

“We always knew she was an attacking presence,” Adams said. 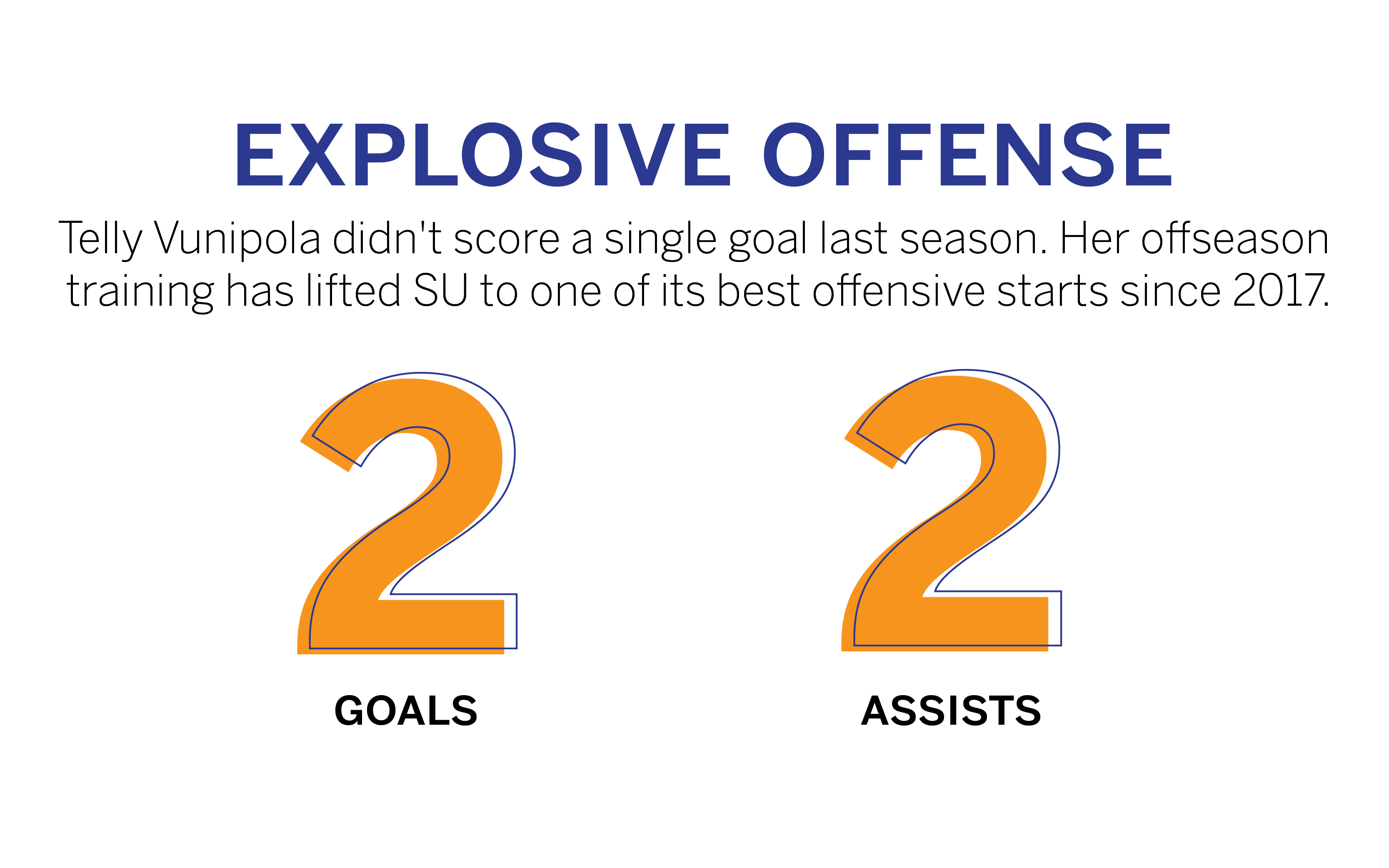 At home during the spring, Vunipola trained when she could, and at the end of April, Vunipola began a new fitness routine. Eliseo Cabildo, the director of training at Winner Circle, put Vunipola on an inclined treadmill. Vunipola struggled, gasping for air, and told Cabildo she couldn’t feel her legs.

“I was pretty out of shape, honestly,” Vunipola said.

Vunipola posted her workouts on Snapchat. Later, Aleman, her former teammate from Chino Hills High School (California), tapped through her stories and learned her former teammate was working out at Winner Circle. The two connected, and once Aleman was back from New Mexico State, she joined Vunipola at the athletic center.

Vunipola and Aleman drove 30 minutes from Chino Hills to Corona to start their workouts at 6 a.m. Weekdays would alternate between sprinting on an inclined treadmill or full body weight lifts. After, the two would practice finishing shots in the back of the net and their crosses, Aleman said. Weekends were for recovery.

On the turf field in the back of the facility, Vunipola repeatedly ran the ball into the corner, crossed it into the box for Aleman to finish it off. The two would move around the field and switch between passer and receiver for about an hour, splitting 20 reps between the two of them. Sometimes Cooper would join in, too.

“She got so good at being able to hit the driven balls and putting power behind a pass and behind a shot,” Cooper said. “She was very intentional with what she did.”

Workouts continued at Winner until Vunipola reported back to Syracuse in August. Before she left, Cabildo measured Vunipola’s leg force on a Keiser machine. Since the start of the summer her legs’ pound of force tripled to nearly 4,000, close to the force of an NFL linebacker or defensive end, Cabildo said.

While sitting at Manley Field House hours before the game against Cornell, Vunipola said she’s seen an increase in her fitness in the way her body moves from baseline to baseline. Cabildo, Aleman and Cooper have seen the result of Vunipola’s summer routine — such as Vunipola’s first goal at Syracuse, a penalty kick — through highlights on their social media feeds. And those crosses into the box, the ones she repeatedly practiced this summer, rifled from her usual spot in the left corner to her Syracuse teammates.

“I just noticed that in my stamina, just being able to run and play the full 90 minutes because that in itself is a lot,” Vunipola said. “It’s just my fitness.”