Syracuse’s women’s tennis team finished its 2022 season with an overall record of 10-11. After winning six of its first seven matches, the team looked promising for the rest of the season.

But the Orange would eventually drop nine matches in Atlantic Coast Conference play, finishing their season with a 4-1 loss to Wake Forest. Their season was a roller coaster, but they periodically showed moments of promise that should bring hope for the program’s future.

Here are some takeaways from the 2022 season:

After finishing the 2021 season with 44 singles wins, Syracuse improved that total to 52 this year. At the forefront of that improvement was Polina Kozyreva, who combined for a 15-11 record in singles play during her first two seasons. But this season, Kozyreva won her first eight matches, only allowing 28 points scored from her opposition.

Kozyreva used her powerful hitting to move from the No. 5 singles position to the top singles spot at one point. While she dominated most of her nonconference opponents, Kozyreva lost her last six matches of the season, all coming against ACC opponents.

The implementation of freshmen Miyuka Kimoto and Shiori Ito was also a bonus for the Orange’s singles depth. Kimoto was positioned in the No. 1 or No. 2 singles spot throughout the season, winning six of her first seven matches. But her performances fluctuated as she finished with a 10-11 record, the third best on the team.

Kimoto was also one of two players to defeat a nationally ranked opponent, winning in three sets against Clemson’s Eleni Louka. Ito’s style of play was not fully polished at first, but eventually she became accustomed to the up during the last handful of matches, winning four of her final six matches to finish with an 11-7 record.

Ines Fonte finished the 2021 season with only one win in singles play but improved to nine wins this year, including five consecutive victories to finish the season. Fonte’s strength was prevalent in her backhand volley during her five-match winning streak, which she used in three matches that went down to the final set. Her improvement during the season will potentially move her up in the team positioning for her junior season. 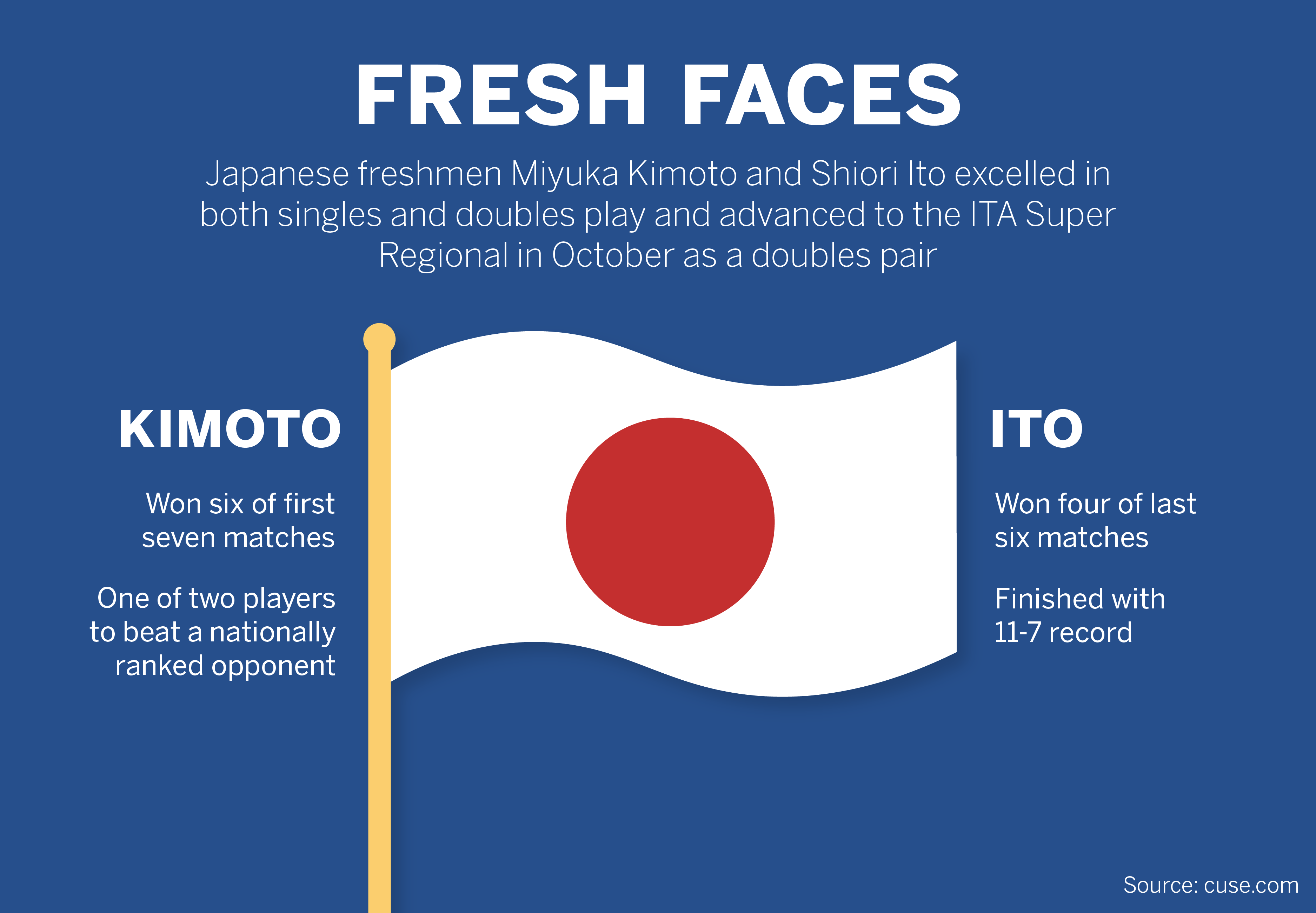 Despite Syracuse’s singles improvement, its recurring injuries cost the Orange at times. Injuries limited Zeynep Erman and Sofya Treshcheva’s performances. Erman finished with a 4-4 record during her sophomore season last year, but after an injury sidelined her for the first half of the 2022 season, it took awhile for her to secure her first, and only, win.

Coming off an All-American singles selection and NCAA Tournament appearance in 2021, Viktoriya Kanapatskaya became one of the best players in the nation, ranking 20th. Instead, she finished 8-9, which included six consecutive losses to end the year.

Syracuse finished 30-24 in doubles play this season as Kozyreva, Ito and Kimoto were the team’s top three performers. Each finished above the .500 mark while struggling in conference play. Kimoto adapted with whomever she played with, posting a 12-8 record. Ito and Kozyreva had almost the same results, ending the season with an 11-8 and 11-9 record, respectively.

The Orange performed well for a team that constantly alternated their doubles pairings. Their 30-24 overall record is largely due to SU’s nonconference schedule, as it went 13-16 during conference play. Each player finished with an individual record of .500 or above in doubles play. Kozyreva and Kimoto starred as Syracuse’s best doubles pairing, posting a 9-7 record while Treshcheva and Ito finished 8-6. Kanapatskaya and Fonte finished 7-5, yet they stabilized throughout the season, winning their first five matches by a total of 30-8.

Head coach Younes Limam has frequently said the ACC is the best conference in women’s tennis, and the statement held true throughout the season. While the Orange won six of their first seven matches, they outscored their opponents 34-6 in the victories. Most of Syracuse’s players performed their best in nonconference play, including Kozyreva, who won seven of her eight singles matches during that period.

Before April, Syracuse’s losses weren’t close, as it was outscored 8-41 by its opponents. Afterward, the Orange started to slowly improve in each match, as four of their last five regular season matches were decided by one point. But during the ACC Tournament quarterfinal match, Wake Forest defeated SU in a 4-1 scoreline.

The post Takeaways from Syracuse’s up-and-down season appeared first on The Daily Orange.