Taj Harris had his hands on his head as he reached the Syracuse huddle. He just had kept SU’s drive alive, again, and the Orange were inside the 10-yard line. Now, he had a chance to tie the game with less than a minute remaining.

On the third down, he dashed into the end zone, faked left and ran right toward the out-of-bounds line. He was open, but his quarterback Rex Culpepper was tackled to the ground. Harris jogged back to the line of scrimmage, and an ill-advised fourth-down spike ended Syracuse’s last chance for a second home win in 2020.

Harris was perhaps Syracuse’s most-reliable offensive weapon on Saturday, catching 13 passes — more than half of Culpepper’s total completions — for 146 yards and a touchdown. But the potential 14th, a drop of a would-be touchdown, will linger with Babers.

The number of yards Harris caught Saturday represented a career-high for the junior, who didn’t top 70 yards for three straight weeks and didn’t catch more than 100 since Oct. 10. But it wasn’t enough, as Syracuse (1-9, 1-8 Atlantic Coast) dropped its ninth game of the season to NC State (7-3, 6-3 ACC) 36-29.

“Taj was hungry,” linebacker Mikel Jones said. “Every time he got the ball, he tried to make a play and get a first down.”

There was a clear emphasis to increase Harris’ touches from the first play. The New Jersey native caught a curl route and fought with NC State cornerback Shyheim Battle for the first down. Harris, on the first play of the game, matched his catch total from the week prior against Louisville.

Babers didn’t say that Harris’ increased output was a result of the game plan and instead cited how NC State defended the boundaries. But Harris was constantly on the end of slants, curls and crossing routes. Oftentimes, he created a few yards of separation.

Before Saturday’s game, Harris also hadn’t caught a touchdown since Oct. 10 against Liberty. In that loss, he flipped his middle finger to the television camera.

“Taj stood up on Sunday. He apologized to the team,” Babers said two days after the incident. “We have addressed that.” 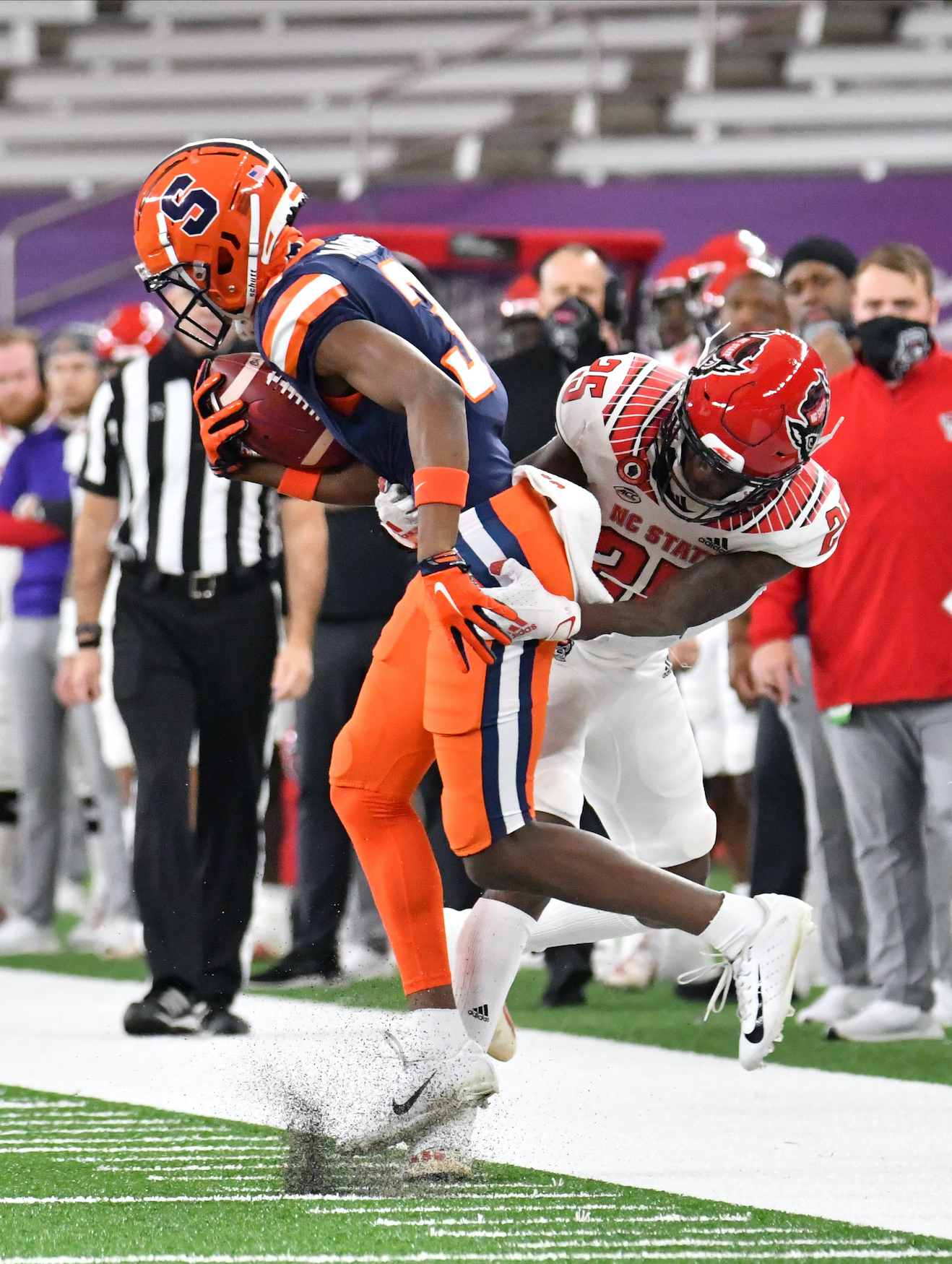 Harris didn’t travel that week to Clemson and sophomore receiver Anthony Queeley became the No. 1 receiver. Harris didn’t see the same production on his return, catching 11 passes over the last three weeks. Even during a seven-catch performance against Boston College, he had 61 receiving yards, then his second-lowest of the season.

That shifted on Saturday, as Harris ended the game with nine first-down conversions, over half of SU’s total 16. Six of those came on third down, 75% of the Orange’s eight third-down successes.

On one in the third quarter, Harris caught a low throw from Culpepper on a 3rd-and-14, changed direction and dashed past two NC State defenders. With Wolfpack defender Jakeen Harris standing in front of him, the SU receiver juked left, but an ankle tackle tripped him up.

“When Rex was out and he was throwing the ball, he was giving those guys some opportunities,” Babers said. “I just wish we could’ve been a little bit more efficient.”

But Harris often provided a lifeline for Culpepper, especially on the late, game-ending drive. He caught a crossing pattern on a third down to set the Orange up inside the 10 and hauled in a 26-yard reception on a 3rd-and-seven earlier in the possession.

Babers’ main gripe with Harris came in the third quarter, when Culpepper accurately placed a deep pass down the sideline and into the hands of a streaking Harris. It slipped through his fingers. What could’ve been a 16 point game stayed at nine.

Harris screamed, “No” five times before bending over and placing his hands on his knees. He glanced back up at the replay on the scoreboard, only to yell again.

He knew that 14th catch could’ve created a two-touchdown lead entering the fourth quarter. Babers did, too.

“Taj can play a lot better, too,” Babers said. “He left some meat out there on the bone.”