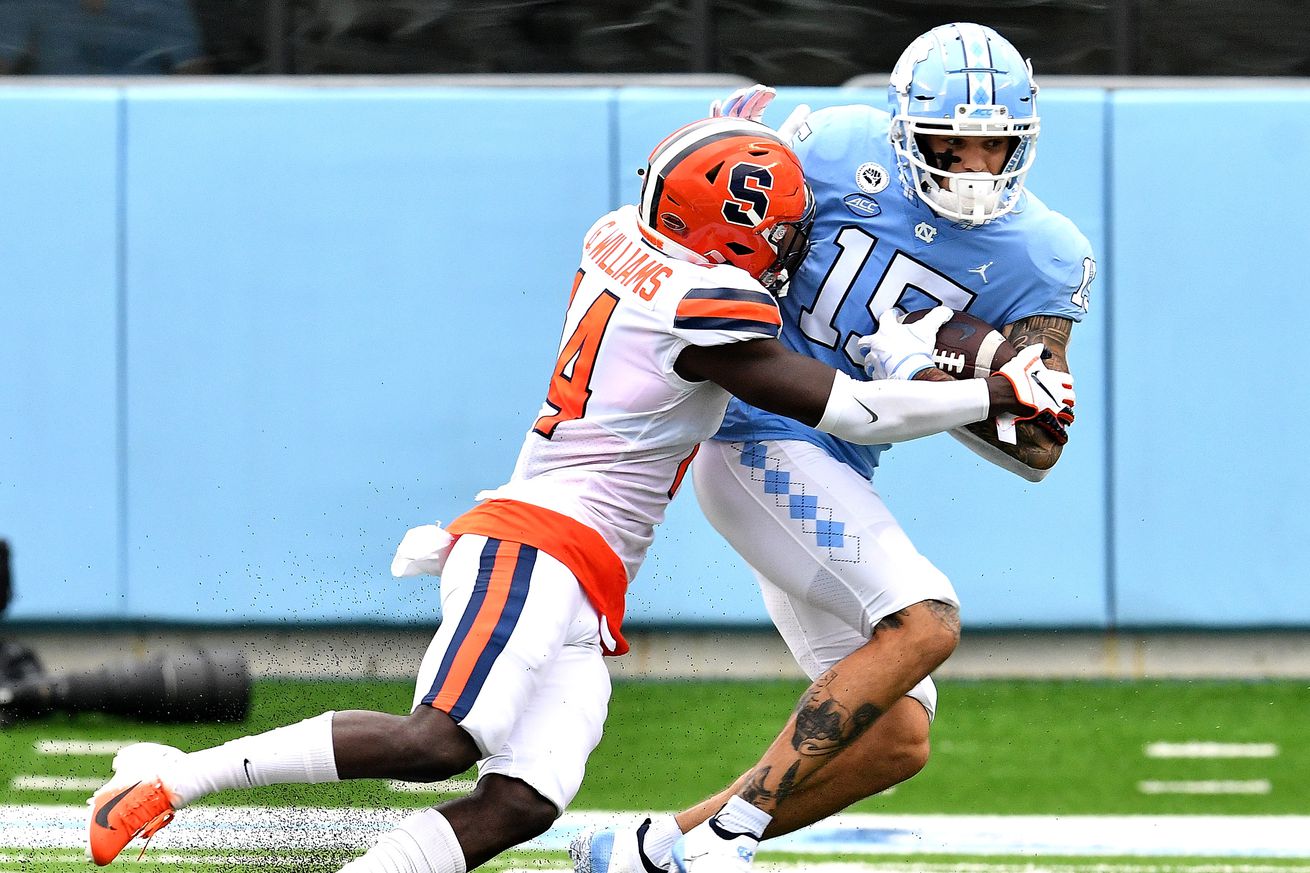 The youth of SU’s defense impressed in their first outing

Whenever there is roster turnover, there is bound to be concern about who steps in to fill the shoes. Andrew Armstrong, Lakiem Williams, and Christopher Fredrick were three key starters that graduated after the 2019 season. Heading into the 2020 season, Dino Babers and Tony White have chosen to fill some of the voids left by seniors with younger players.

The relatively young and inexperienced defense was put to the test early to start the season. Syracuse faced a rejuvenated and hungry North Carolina offense that many expect to be one of the top units in the ACC. However, the Syracuse Orange defense held the Tar Heels at bay, surrendering only 10 points before fatigue set in.

While praise was thrown at Tony White’s 3-3-5 system, the young players that have been thrust into prominent roles in SU’s defense played a big part in controlling UNC’s offense for 75% of the game. Fans know what they’re going to get from an experienced defensive line (consisting of Kingsley Jonathan, McKinley Williams, and Josh Black) and some experienced secondary players (notably Andre Cisco, Trill Williams and Ifeatu Melifonwu), but the guys who were getting their first significant playing time for the Orange impressed throughout the game.

Players such as Garrett Williams, Steve Linton, and Stefon Thompson have been called upon to play an important role for Syracuse in 2020 and they’ve passed their first test. Until the defense as a whole gassed out in the fourth quarter, UNC were forced to pay attention to the younger influence on the field, not just the known talents on SU’s defense.

Garrett Williams in particular was targeted a lot throughout the game as Sam Howell lost confidence to target Dyami Brown, who was covered all game by Melifonwu. Receivers covered by Garrett were targeted five times and gained only 55 yards. He received the second highest defensive Pro Football Focus (PFF) grade among Syracuse defenders with at least 30 snaps, earning a 75.6. More impressively, Garrett Williams earned the highest tackling grade (81.7) and the highest coverage grade (75.6) for Syracuse in a defense that has talented players in both areas.

Those grades wouldn’t be something one would expect from a player who only played on special teams for four games in 2019. However, the Syracuse coaching staff felt comfortable enough to start him as one of its two outside cornerbacks and Williams performed well in his first start. He’s clearly put in the work to earn the trust of his coaches and fellow players.

“I always knew Garrett was going to be good from last year,” said Melifonwu. “Garrett’s one of those guys that after practice, I’m working with him every day. We help each other with what we could do better.”

While Williams helped Syracuse’s secondary limit the options that Howell had in the air, the defensive line and linebackers of Syracuse put the pressure on the Tar Heel signal caller early on. Linebacker in particular has been a unit of concern for the Orange with three sophomores, two freshmen, and a redshirt freshman among the players in the two-deep. Despite those worries, the defense that was shown against UNC was not one that many would say looked “inexperienced.”

Even though Linton is behind Thompson in the depth chart, the redshirt freshman was instrumental in helping the defensive line apply pressure to the UNC offensive line. Linton earned a 71.1 PFF defense grade, the third highest among SU defenders with at least 30 snaps. He also earned the highest run defense grade (79.1) and the second highest tackling grade (79.1) among that same group.

Linton is yet another player who didn’t see the field much in his first season with the Orange, featuring in only three games and getting limited time in those contests in 2019. Yet the Georgia native is another player whose skill set has impressed his fellow teammates. With three QB hurries and one QB hit against the Tar Heels, Linton proved to be a destructive force from the linebacker position.

“The system we have now is a perfect fit for [Linton],” said Josh Black. “He’s understanding how to use his speed, his strength, and his long arms to his advantage and it’s awesome to see how far he’s come with his technique.”

While Thompson didn’t garner the same attention like Williams and Linton did, you cannot deny that the coaches saw enough from him during summer camp to entrust a true freshman with a starting linebacker spot. Thompson still earned a 68.3 PFF defensive grade, the fifth highest among SU defenders with at least 30 snaps. His 77.2 run defense grade was only second to Linton’s.

Thompson perhaps didn’t have the same eye-popping individual efforts that made Williams and Linton stand out. Despite that, he still did his job well to record the third most total tackles on the team against the Tar Heels. There’s a reason he’s starting over Linton, and the SU coaches and players seem very confident in the youth that they have at their disposal.

“When you think of younger guys, you think, ‘Oh, they’re gonna play slower, maybe they’re not as physically developed,’” said Black. “But these guys are working their tails and butts off in the offseason. They’re playing fast and very physical out there. These guys felt like veteran guys I was playing with. I was really impressed with how they played.”

The true test for this young and unique defense comes later in the season as more teams gather tape on how they play. It’s entirely possible that the impressive performance shown against UNC is down to a lack of film and knowledge on how the 3-3-5 plays and the talent that the young defenders of Syracuse have. However, the younger guys who have been asked to fill in important roles in the Orange defense have passed test one.