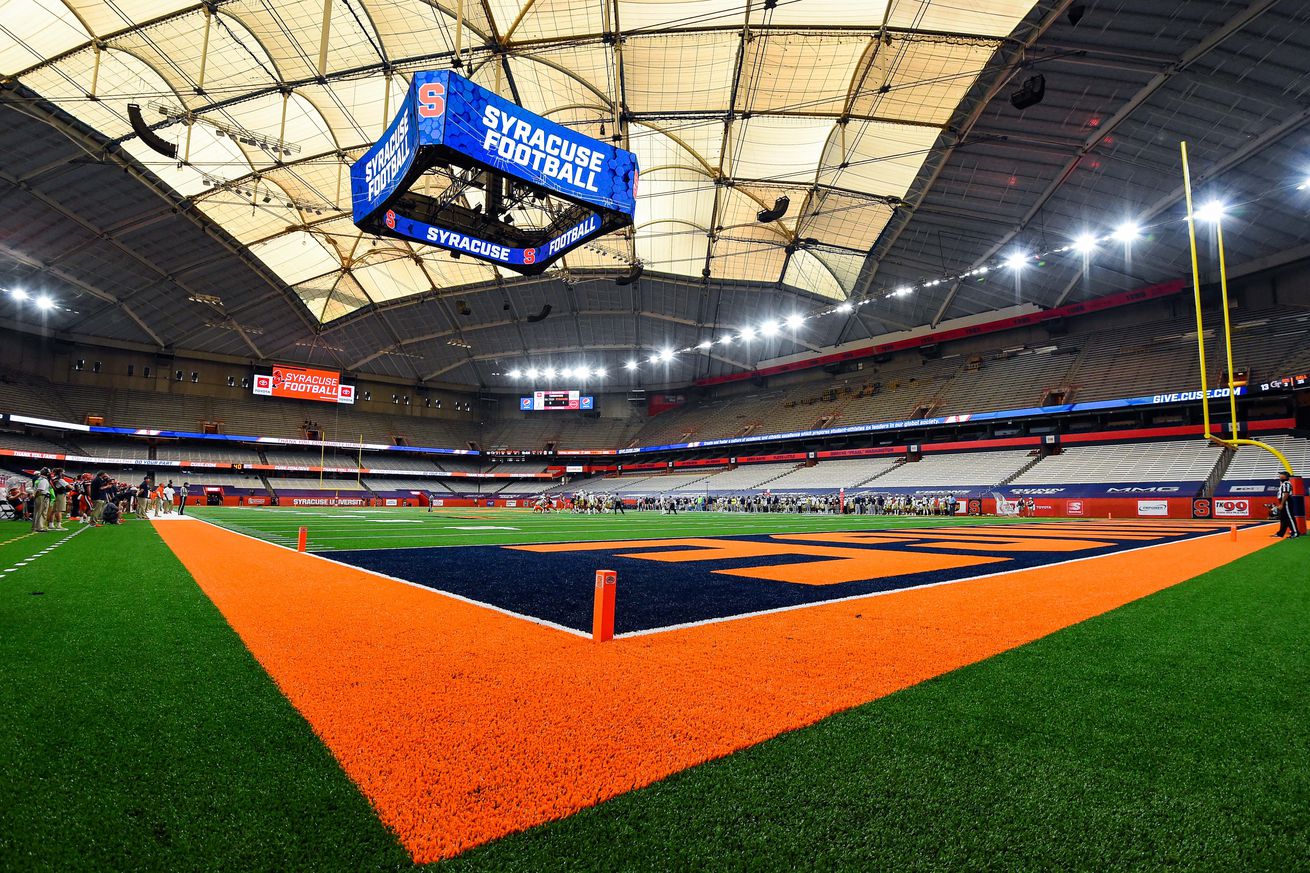 A pretty straight-forward choice this week

Picking a player of the game for the Syracuse Orange was relatively tough during the first two weeks of the season. That was in large part due to the fact that there were multiple players in each game that had stand-out performances, even during losses.

However, as you might expect, this week went a lot smoother. Syracuse played a fine game against Georgia Tech for the first Orange win of the 2020 season. And while multiple players provided great performances to propel SU forward to victory, one player stood out among the pack, which is not bad considering the amount of talented playmakers on both sides of the ball.

Can’t bring him down!

It’s not secret that the Syracuse rushing attack has been anemic through the first two weeks of the season. Fans were expecting Abdul Adams and Jarveon Howard to carry the reigns of the running game but both opted out of the season. Jawhar Jordan and Markenzy Pierre were initially tasked to move the rock forward on the ground, but both showcased rushing struggles in SU’s first two games.

A glimmer of hope appeared during the Pitt game with a small burst of life from Tucker, who impressed in limited action. And after Jordan got banged up during the first series against the Yellow Jackets, Dino Babers turned to the true freshman to kickstart the offense.

What followed was the best rushing performance of the year that finally set the fast tempo needed to churn the wheels of the Syracuse offense. Tucker carried the ball 24 times for 112 yards and two rushing touchdowns. All SU running backs, including Tucker, combined for 101 yards through the first two games of the season. The Orange finally got the run game going, which in turn allowed the offense to use its trademark speed to set up fast passes and deep balls.

What was incredibly impressive about Tucker’s performance against Georgia Tech was his ability to gain extra yardage after he had been stopped in his tracks. The Maryland native routinely fought for extra yards after the initial contact was made, turning one or two yard rushes into five yard gains. Tucker gained 77 yards after contact against the Yellow Jackets, more than double what any other running back had recorded for Syracuse in 2020. He also averaged 3.21 yards after contact, the highest for a Syracuse running back with over 10 snaps in a game during 2020.

It seems like Babers has found his new starting running back in Tucker. That being said, Babers may still turn to Jordan against Duke. SU’s head coach said in his postgame press conference that if he didn’t get injured, Jordan could have put up similar numbers to Tucker against the Yellow Jackets. Likewise, Georgia Tech’s defense is not at the same level that UNC’s and Pitt’s defense is, which may have played a big factor in Tucker’s breakout game.

Whatever the case may be, Tucker’s performance against the Yellow Jackets provided a spark for a Syracuse offense that badly needed one after posting only 16 points and one touchdown over the first two games of the season.

Your turn, guys. Who was your player of the game for Syracuse against Georgia Tech? Sound off in the comments below.