During Syracuse’s opening fixture against Fairleigh Dickinson, Telly Vunipola charged the box, trying to position herself as a corner kick flew in from Natalie Weidenbach. Weidenbach’s looping effort ended up on the ground, and Vunipola was pushed from behind as she tried to connect on the attempt.

Vunipola made her way to the penalty spot, placed down the ball and fired home Syracuse’s first goal of the season 52 minutes in.

On first glance, the goal seemed expected — Syracuse led Fairleigh Dickinson, a small Division-I program in the Northeast Conference. But the opener showed an important stepping stone for the program: progress.

During Syracuse’s condensed 2020 season, it took 459 minutes for the Orange to score for the first time. Through untimely injuries and a schedule filled with only conference games, SU only scored five goals in its eight games, winning once.

Fast forward to this fall, and Syracuse has multiplied its goal total from last year. The Orange have already scored 11 times and quadrupled their win total from the previous season just five games in. New personnel, including freshman and transfers returning to original positions, has spurred Syracuse’s offensive production to start the season, Syracuse head coach Nicky Adams said.

“With the personnel that we have with the returners and the newcomers, we are able to just play with more attackers,” Adams said. “We are definitely attacking with numbers, not just one or two players, compared to previous years. Now we are attacking with four or five or six players.”

Vunipola, who played center back last year for SU out of necessity, is one of the players who has returned to her normal role, starting in attack this year. Vunipola has two assists in five appearances and leads the team with six points. Against Eastern Michigan, her 88th minute goal was the decider as she put a point-blank header into the top right corner, just out of the diving reach of EMU’s goalie.

“Telly has been a pleasant surprise,” Adams said. “We always knew what was in her watching videos off the transfer portal, but she is really playing with confidence … and is creating a bunch of opportunities for us.”

Alina Miagkova also played center back last year due to personnel issues after transferring from Central Michigan. She has used her strength and crossing abilities to cause havoc for the opposition, Adams said. 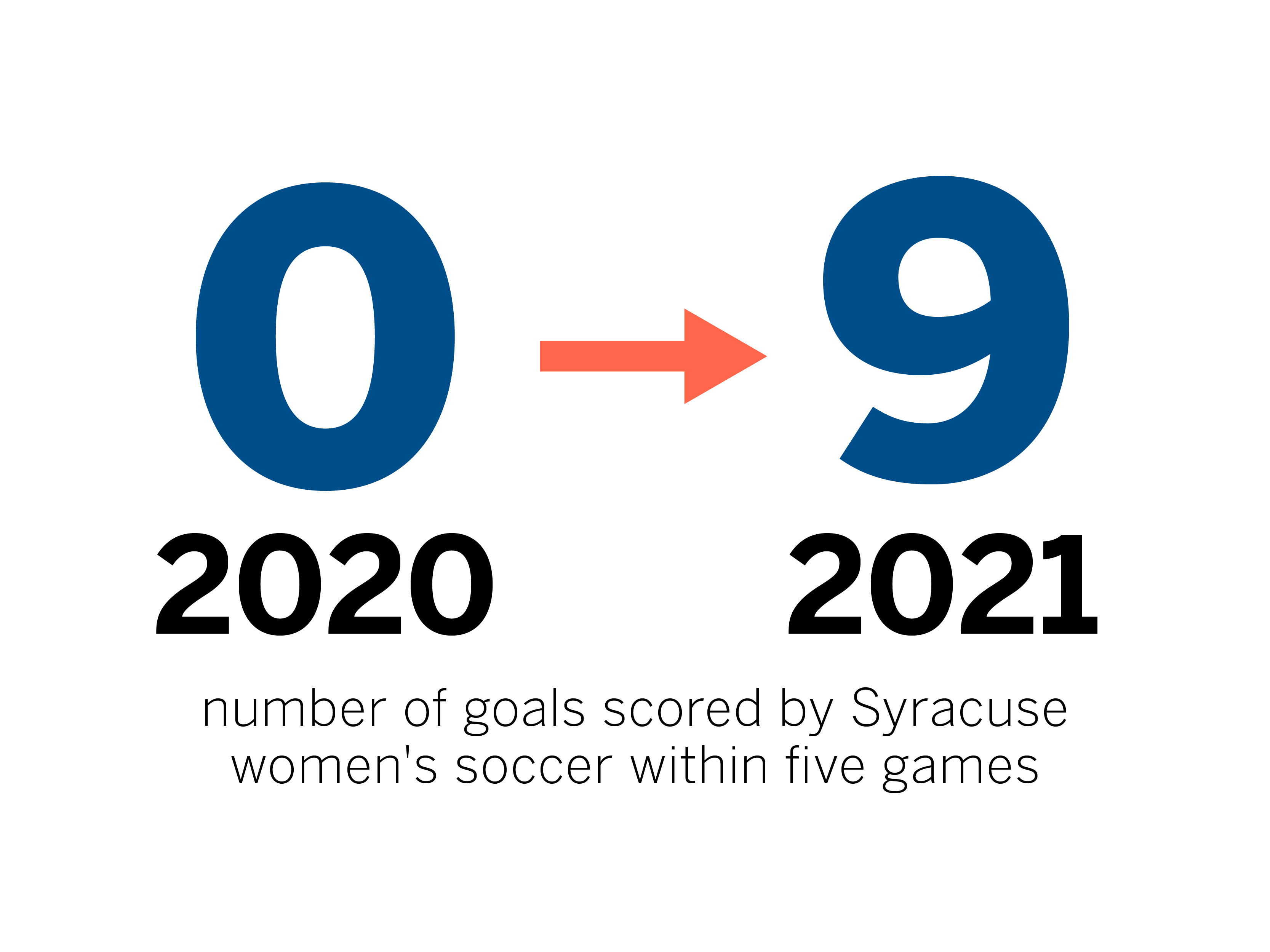 Against Eastern Michigan, Miagkova charged down the right side to set up several opportunities in transition. After receiving the ball near midfield or toward the corner flag, Miagkova would take her defender one-on-one before breaking away and sending in crosses. Miagkova set up three opportunities with that strategy in just the first 15 minutes.

“We definitely have done a good job of creating a lot of opportunities this year,” senior forward Meghan Root said. “We want more, but I think we definitely started in a good way with that.”

This is also the first year that Adams had full control over the incoming recruiting class. Adams inherited recruits from former SU coach Phil Wheddon when she took over three seasons ago.

The Orange have 11 newcomers from their latest recruiting class, five of which — midfielders Pauline Machtens, Ashley Rauch, Koby Commandant and defenders Emma Klein and Grace Franklin — have all started and been featured regularly.

Machtens, who was recruited from Germany, has already scored twice this season — a game winner against Binghamton and an insurance goal against New Hampshire.

Another international recruit, freshman Kylen Grant, came off the bench for SU in the 22nd minute against New Hampshire, taking a position on the right side of the field. Midway through the second half, Root found Grant with a through ball, leaving her one-one-one with a defender in front of goal.

Although she absorbed contact, Grant stood her ground, shrugged off the defender and sent a low shot toward the bottom right corner. UNH’s goalie dove but missed, and SU had the lead after a 72-minute stalemate.

“Everytime you get a new person in, transfer or freshman or whatever, they bring kind of a new dynamic, a new energy to the team,” Root said.