If there’s college football in 2020, all signs point to Syracuse playing a completely new style of defense that few programs have implemented.

Syracuse briefly hired Zach Arnett in the offseason, later bringing on Tony White after Arnett flipped to Mississippi State. Both defensive coordinators specialize in the 3-3-5 defense, indicating SU is serious about switching from the 4-2-5 nickel.

In theory, the 3-3-5 is fast, malleable and conducive to an undersized defensive line. The scheme includes three down linemen, three linebackers behind them and five defensive backs. By substituting a lineman for a defensive back, teams hypothetically sacrifice rush defense for speed to combat the spread offenses of modern football.

“If you’re at a place where you have the ability to get a lot of good defensive linemen all the time, you don’t have to go to it,” SU head coach Dino Babers said. “But if you’re at a place where sometimes you have good defensive linemen, sometimes you don’t, it can be a defense that can really confuse quarterbacks in the throw game and really give the offensive line some problems in the run game.”

Although the 3-3-5 is relatively uncommon, it’s yielded positive results at several programs, including Arizona State and San Diego State, two of White’s previous stops. SU’s defensive switch comes after the Orange allowed 30.7 points per game in 2019, 11th out of 14 Atlantic Coast Conference teams. Now, without key linebackers Kendall Coleman and Alton Robinson, SU is betting the defensive back-heavy 3-3-5 helps compensate for a lack of front-seven size.

“We wanted to make everybody happy, and the fans happy and the coaches happy,” defensive back Trill Williams said of Syracuse’s 5-7 2019 season. “But that year’s over with. It’s gone. It’s in the past. And we’ve got new coaches here and we’re going to be ready to go this year.”

Babers got his first exposure to the 3-3-5 defense as a defensive back for Hawaiii in 1980. He remembers his sideline scrambling for answers to solve the unique New Mexico defense.

That 1980 New Mexico defense was run in part by then-assistant coach Joe Lee Dunn, widely credited as the inventor of the 3-3-5. Also on the 1980 Lobos staff: defensive coordinator Rocky Long.

Long would later become head coach of New Mexico and San Diego State, making stops at TCU, UCLA and Oregon State. At UCLA in 1996, he recruited an outside linebacker from El Paso, Texas by the name of Tony White. On the second level of the 3-3-5, White became a three-year starter and senior captain.

After leaving San Diego State in 2017, White spent two years at Arizona State, running the 3-3-5 as defensive coordinator in 2019. In White’s tenure at ASU, the Sun Devils allowed 13 passing plays of at least 40 yards compared to 34 such gamebreakers before he arrived.

Since White’s been involved with the 3-3-5 for over a decade, Long said, he has the institutional knowledge to coach it at Syracuse.

“I think he’s a great teacher,” Long said of White. “He’s very demanding without being demeaning, and if you’re a good teacher and you relate, that seems to work with most of this age group that we work with in college football.”

Before deciding to bring in White to install the 3-3-5 defense this offseason, Babers consulted Jim Boeheim, SU’s men’s basketball coach. Like the Orange’s 2-3 zone, Babers sees the 3-3-5 as a defense that can give Syracuse an edge because teams have to plan for its unpredictability.

On Tony White implementing the 3-3-5 in a pandemic: “I think him and Coach Gilbert have done a fantastic job with the lack of spring ball…For the defensive side of the ball, they’ve done an outstanding job. About as well as you can do in the Zoom world.”

“If it can be as much of a nuisance as the 2-3 (zone) defense is for our basketball team, then I think it will have been a good decision for us,” Babers said. “We’ll have to see.”

But no amount of experience with the 3-3-5 could’ve prepared White to implement a completely new defense during a pandemic. The Orange had just three days of spring practice, which they were planning on using to introduce the 3-3-5 principles. Instead, the coronavirus pandemic shut down the workouts, and hours of Zoom calls and film review ensued.

To run the 3-3-5 effectively, players need to be able to take on multiple assignments so the defense can throw different looks at offenses, said Chris Brown, author of “The Essential Smart Football.” The key to flustering quarterbacks is flexibility.

This starts in the trenches. The 3-3-5 is typically a “one gap” defense, Brown said, meaning each defensive lineman is only responsible for one running lane. However, unlike a 4-3 or a 3-4, linemen play a “heads up” technique, so they don’t telegraph which gap they’re attacking. A nose tackle lines up over center, with defensive ends flanked to the edges and linebackers directly behind them. The variation is also called the “3-3 stack.”

“Your rules kind of get screwed up with the stack,” Brown said. “It’s not as straightforward as other defenses. Especially for college guys. I think that’s why you see the stack more in high school because it creates that kind of confusion.”

Josh Black, who played nose tackle last year, said he’s a perfect fit as a defensive end in the 3-3-5. As a freshman in 2016, Black started nine games on the edge but recorded just 1.5 sacks. Though he said he was “scrawny” then, he put on weight to play in the interior the next two seasons.

Senior Kingsley Jonathan projects to play opposite Black, with redshirt senior McKinley Williams (6-foot-4, 291 pounds) likely lining up across from the center as a nose tackle. 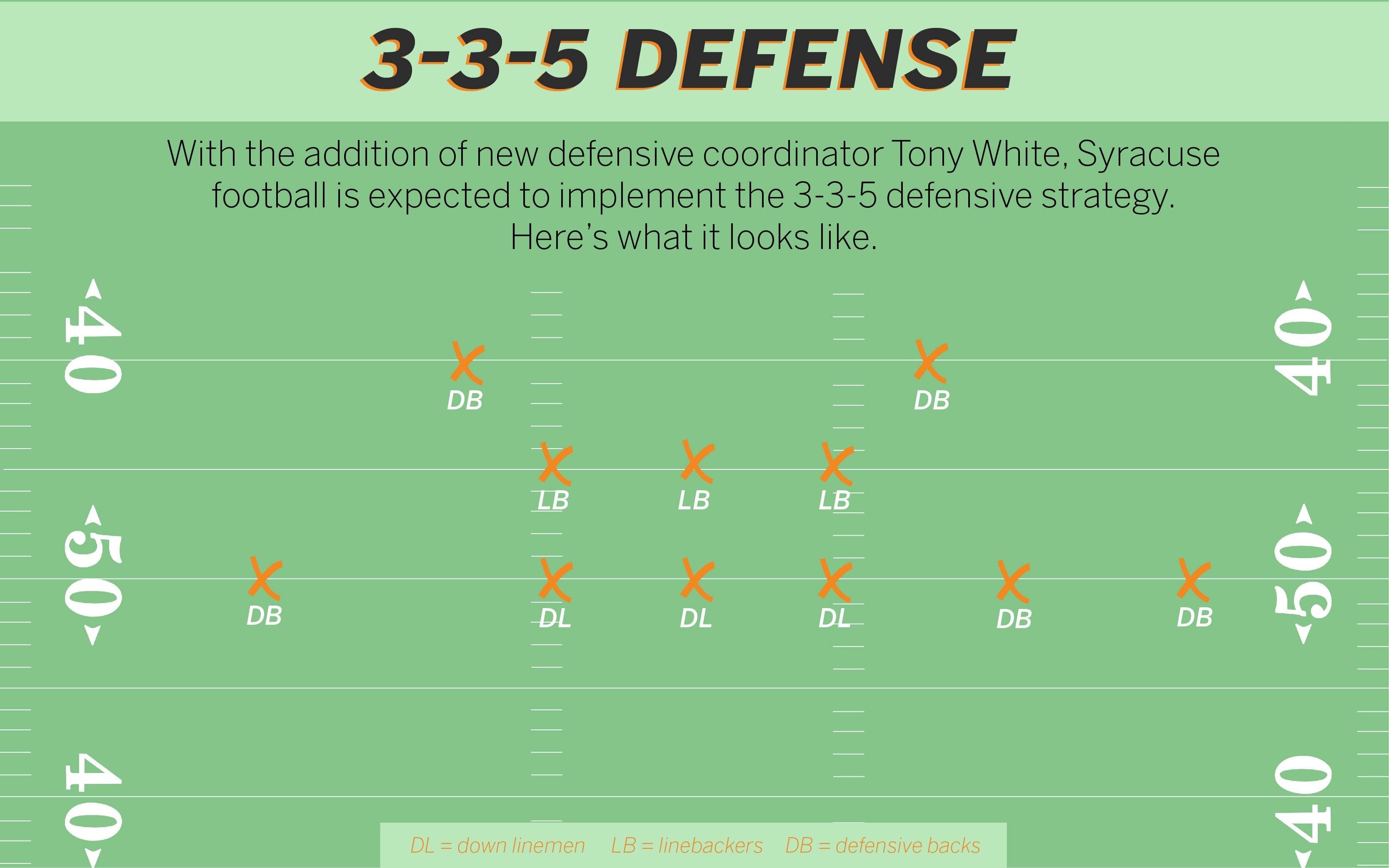 Since the 3-3 stack usually only has six players in the box instead of the conventional seven, clogging up gaps with linebackers and safeties is more important for stopping the run.

If executed correctly, rush defense can be a strength of the 3-3-5 — San Diego State allowed the second fewest rushing yards per game last year (75.4).

Linebackers may be asked to be edge rushers, run stoppers and pass defenders at once. The onus will fall on a relatively inexperienced core of Tyrell Richards, Mikel Jones, Steve Linton and Geoff Cantin-Arku.

The hallmark of the 3-3 stack, putting five defensive backs on the field, should give Syracuse an advantage, since the secondary is its strongest position group. Preseason First Team All-American Andre Cisco, Trill Williams, Ifeatu Melifonwu and Eric Coley — all of whom stand at least 6-feet tall — are formidable playmakers.

Linebackers and defensive backs can be interchangeable, Long said, which causes opponents to struggle with identifying where the blitz is coming from.

Another aspect of the 3-3-5 is the addition of the “rover” position, which is essentially the safety responsible for manning the middle of the field. Teams can play both man and zone coverage in the 3-3-5, but the rover often acts as a quasi “Cover 3” safety, responsible for the deep middle third of the field.

It’s unclear who will fill this role for SU — multiple players have practiced at it, Cisco said — but Babers pointed to it as a vital position, likening it to a center fielder in baseball.

“This season, the way this defense is designed, it just allows us to play and use our athleticism and put more athletes on the field,” Melifonwu said.

SU’s defense as of Aug. 13 was still learning the terminology and adjusting to the concepts, defensive lineman Josh Black said. And for the 12th-best defense in the ACC from 2019, that could raise some concerns. With less than two weeks until the season opener Sept. 12, the product on the field remains a mystery.

Editor’s note: Syracuse defensive coordinator Tony White was not made available for this story.