Laura Graziosi scored a game-winning, fourth-quarter goal on a penalty stroke against then-No. 15 Wake Forest on Oct. 8. Before Claire Cooke was tripped in the shooting circle, Graziosi pressured and dispossessed a Wake Forest defender near the halfway line, winning the ball back for the Orange. Graziosi dribbled a yard forward before sending the ball into the path of Willemijn Boogert, who forwarded it to Cooke near the left edge of the shooting circle before she tripped.

Graziosi’s work in the midfield extended gave Syracuse a goal and a key win over a ranked ACC opponent.

“You know she’s going to be consistent and score those kind(s) of goals,” Cooke said postgame.

Graziosi’s effort on the play leading up to her goal was a key point in Syracuse’s 2021 regular season. A high-press philosophy instilled by head coach Ange Bradley and executed by veteran players like Graziosi and SJ Quigley served as a catalyst for SU’s regular-season success, which saw the Orange record their longest winning streak since 2015 and their best regular season record since 2016, when the team only lost two games before postseason play.

Throughout the season, Syracuse utilized a pressing system that consistently shut down opponents in their own half. But while the concept has remained the same, the execution of the press varied from game-to-game throughout the 2021 season.

“We try to (either) keep the same press or change the press depending on how we’re doing as a team each week,” Quigley said. “(It depends) on how we’re executing it in practice.” 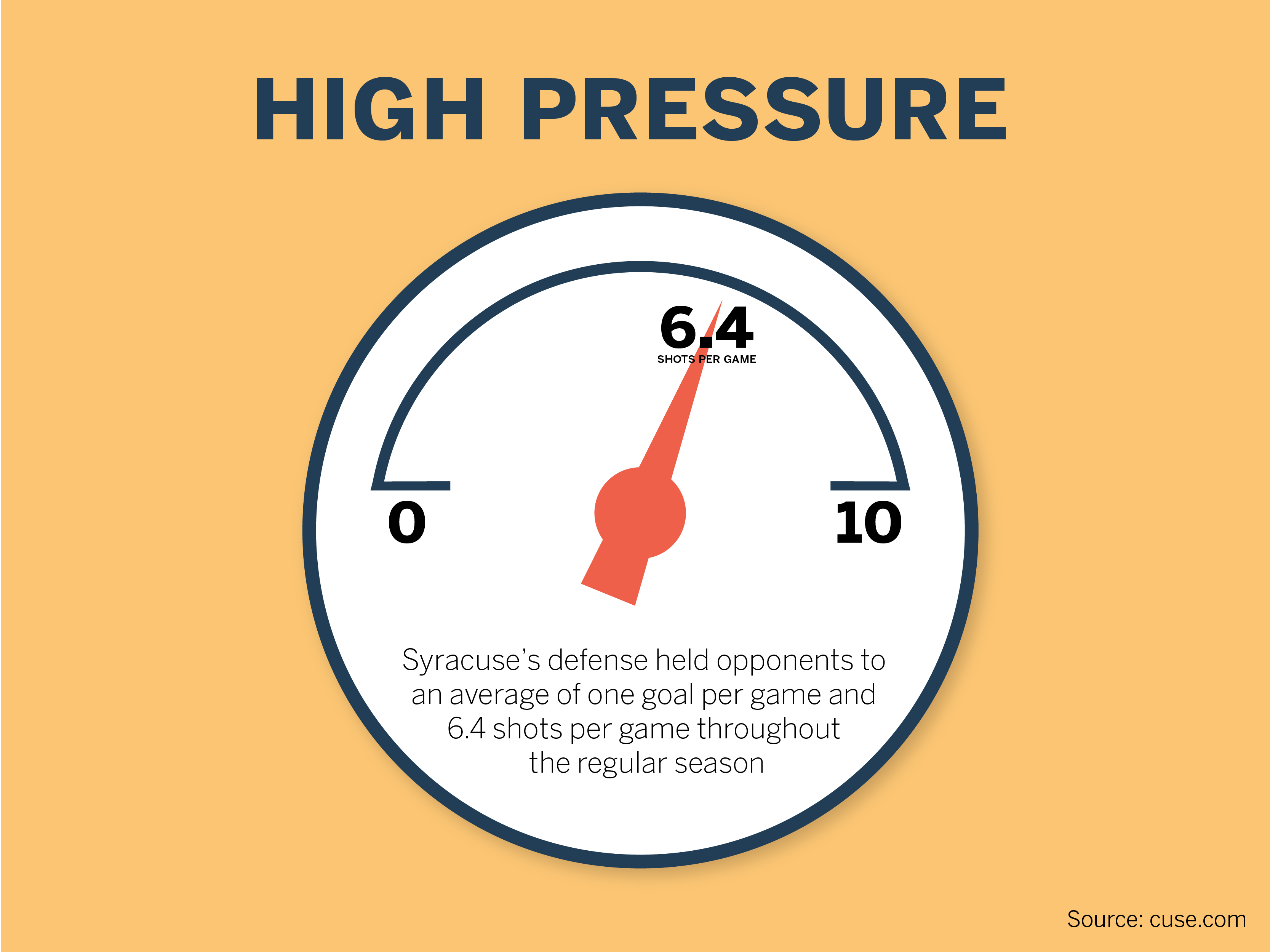 But when facing ranked opponents, the Orange mixed between sitting back defensively and utilizing a high-press to pounce on counterattacks. This balance was displayed in SU’s games against then-No. 5 North Carolina and Wake Forest.

“I definitely need to plan it out,” Bradley said of choosing between the two approaches. “You look at your opposition to make those decisions.”

While primarily executed in the opponent’s half each game, Syracuse’s high-press system was also supported by its backline. Many of SU’s victories — especially during its nine-game winning streak — were supported with a strong defensive presence established by Sienna Pegram, Eefke van den Nieuwenhof and Quigley.

Even when offensive production lagged in terms of low shot and penalty corner conversions, the Orange’s defensive unit held opponents to an average of one goal per game and 6.4 shots per game throughout the regular season.

The strong defensive presence resulted in attacking and midfield players freely pressing opposing backlines. Quirine Comans, Pleun Lammers and Charlotte de Vries all alternated between both forward and midfield positions in each game throughout the season, which saw pressing split into a rotation between the three.

“Our forward line has really good pressure on ball,” Graziosi said. “We … wait to break it down in front of the field and then we could counter and create opportunities.”

Despite two recent losses to then-No. 16 Virginia and then-No. 5 Louisville, Syracuse still utilized a balance of pressing and counterattacking. SU’s struggles stemmed from being unable to capitalize on goal scoring chances that were created. The Orange outshot the Cavaliers 15-8, and they earned two more penalty corners than UVA and one less than Louisville.

“We’re read(ing) each other so it’s easier for moving in the right positions because we know what the other person is going to do,” Graziosi said.