BROOKLYN, N.Y. — It took 31 games to drag Syracuse’s season to this point, to the first sub-.500 regular-season record of Jim Boeheim’s tenure and to NCAA Tournament hopes that teetered on the brink of nonexistence for the first time in five years, and it took 13:55 to make them all seem, for at least the next 24 hours, curable. That’s what a 38-18 run and a 53% shooting clip in the opening 20 minutes will do.

And the transition sequence capping that stretch, the Orange’s final field goal of their 49-point first half, started with a Florida State turnover and ended with Symir Torrence sliding across the Barclays Center baseline, clenching both fists and biceps as his layup bounced through the net. He’d rocketed toward the right block with under two minutes left in the frame, glancing toward Joe Girard III in the opposite corner — who had both hands lifted above his head to signal an open 3 — before he continued to drive anyway. RayQuan Evans’ wrist made contact with his, a referee’s wrist shot in the air and Torrence completed the second consecutive Syracuse possession that ended with an and-one.

Twenty-three of those first-half points came in transition, ignited by Torrence’s return to the lineup and executed by the trio of shooters — Girard, Buddy Boeheim and Cole Swider — that SU built its 2021-22 roster around, and it laid the foundation for the Orange to cruise to a 96-57 win over the Seminoles in the ACC Tournament’s second round. There were no blown leads, early or late, like the last two games. No defensive lapses. No last-second inbound catastrophes, caves against the press or final shots that turned disastrous, like each of Syracuse’s 16 losses this year hinged on.

Instead, its early advantage kept increasing until it turned into its largest conference tournament victory margin since 1999, according to the ACC Network. Swider led the Orange with 28 points, reaching that total despite only logging eight minutes in the second half. Jimmy Boeheim had as many second-half dunks (2) as Florida State had 3-pointers the entire game. And the Orange produced their best game when they couldn’t afford anything less, exploding on offense and limiting the Seminoles to a 32% shooting percentage, to send them into a quarterfinal matchup with top seeded Duke on Thursday.

“I can’t tell you how important (Torrence) is,” Boeheim said. “We didn’t have him in North Carolina and Miami, and the pressure hurt us in both games. And he relieves that pressure, gives us another ball handler. I didn’t really want to go that small, but the small lineup worked. It has worked for us at times, and it worked today.”

It worked earlier in the season for SU against the Seminoles, too. “Better than I thought,” Boeheim said on Jan. 15, when he turned to Torrence for help dealing with ball pressure and it kept the Orange within striking distance after they’d blown a first-half lead. Wednesday’s edition of the three-guard lineup featured Bourama Sidibe or Frank Anselem at center, given Jimmy’s foul trouble, but they still pushed the ball after each of FSU’s 46 misses or SU’s six steals.

“They kind of come off of shooters at times, and if you get into the paint, it makes the job easier for the rest of us,” Girard said. 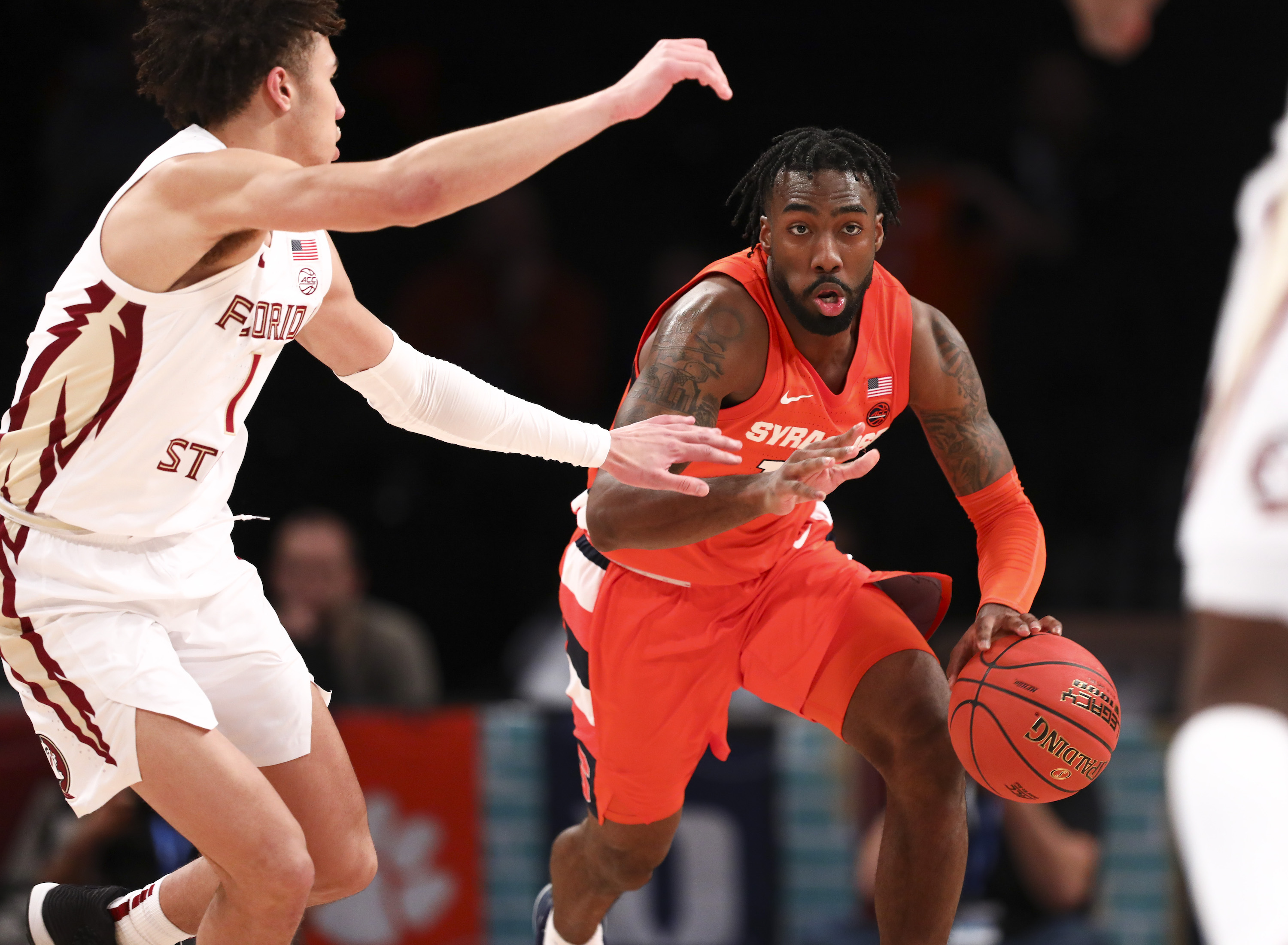 Symir Torrence scored nine points and assists after playing a season-high 29 minutes against Florida State. Courtesy of the ACC

In the early minutes, Florida State started establishing its dominance on the offensive glass. The Seminoles secured six offensive rebounds before the first media timeout, including one by Wyatt Wilkes when he snuck behind Jimmy and finished the layup while drawing a foul. But after the Orange went with three guards they constructed a quick 8-2 spurt that put them up nine points and forced an FSU timeout. Buddy connected on a 3 on that first possession, and Girard and Swider followed a few sequences later in transition — with Swider converting his over a FSU hand in his face and lifting both hands in the air, following a sequence where Wilkes attempted a 3 from the corner that banked off the top of the backboard and never touched the rim.

Girard yelled and pumped his fist, while Torrence rocked his arms back and forth, once he sank his 3 that Torrence had kickstarted by grabbing a defensive rebound and threading a pass up the court. But underneath the basket, Wilkes crouched in pain before heading to the bench. After Girard’s 3, Buddy appeared to punch him in the gut as the two fought for position, thrusting his right hand into the numbers near Wilkes’ midsection.

The SU guard wasn’t called for a foul, and he drove three minutes later for a layup after stealing possession at the defensive end. Unlike games this season where SU has built a lead, stopped scoring and watched it dissolve over time, this one kept growing. Torrence stole the ball, flung it up the court to Swider, and the forward elevated for a dunk. Syracuse turned to its normal starting lineup at the beginning of the second half, but eventually subbed Torrence back in and he finished with nine assists in a season-high 29 minutes.

Pairing with SU’s efficiency on offense was FSU’s inability to convert its 3s, unlike its last meeting with the Orange, when they hit 12-of-20 from beyond the arc. Head coach Leonard Hamilton said that he thought they had the same looks on Wednesday, but they just didn’t fall. Swider said that the Seminoles “come off shooters sometimes” to help with gap defense, and that allowed for SU’s 3s — some more open than others, with a second or two to spare — to fall.

“It’s hard to beat a team like Florida State like that, because we played exceptionally well today,” Boeheim said. “When they did get some open shots, they didn’t make them. So it just kind of snowballed.”

Anselem and Jimmy both dunked twice in the game’s final minutes, with Jimmy’s second being a one-handed dunk that knocked an FSU player to the ground, and Orange eased the second-half minutes for Buddy and Swider as their lead continued to swell  — turning to John Bol Ajak, who limped off with a leg injury, and Paddy Casey. Boeheim said that Ajak’s injury “didn’t look good,” and that “it hurts” if he can’t play against Duke because of SU’s size, and its ever-thinning depth, at the forward position.

After Syracuse’s loss to Miami on Saturday, when it blew an 18-point lead in the second half, Buddy said that Syracuse “can’t be Duke unless we have an out-of-this-world game, honestly.” They’re too good for the 2-3 zone, he added, and in their meeting on Feb. 26, the same one where Torrence left with his injury and the same one where Ajak played a season-high in minutes, Duke converted its shots at a clip Syracuse couldn’t match.

And now, after SU’s best performance of the season, the Blue Devils await.

The post Syracuse’s 3-guard lineup leads it past FSU 96-57 in 2nd round of ACC Tournament appeared first on The Daily Orange.