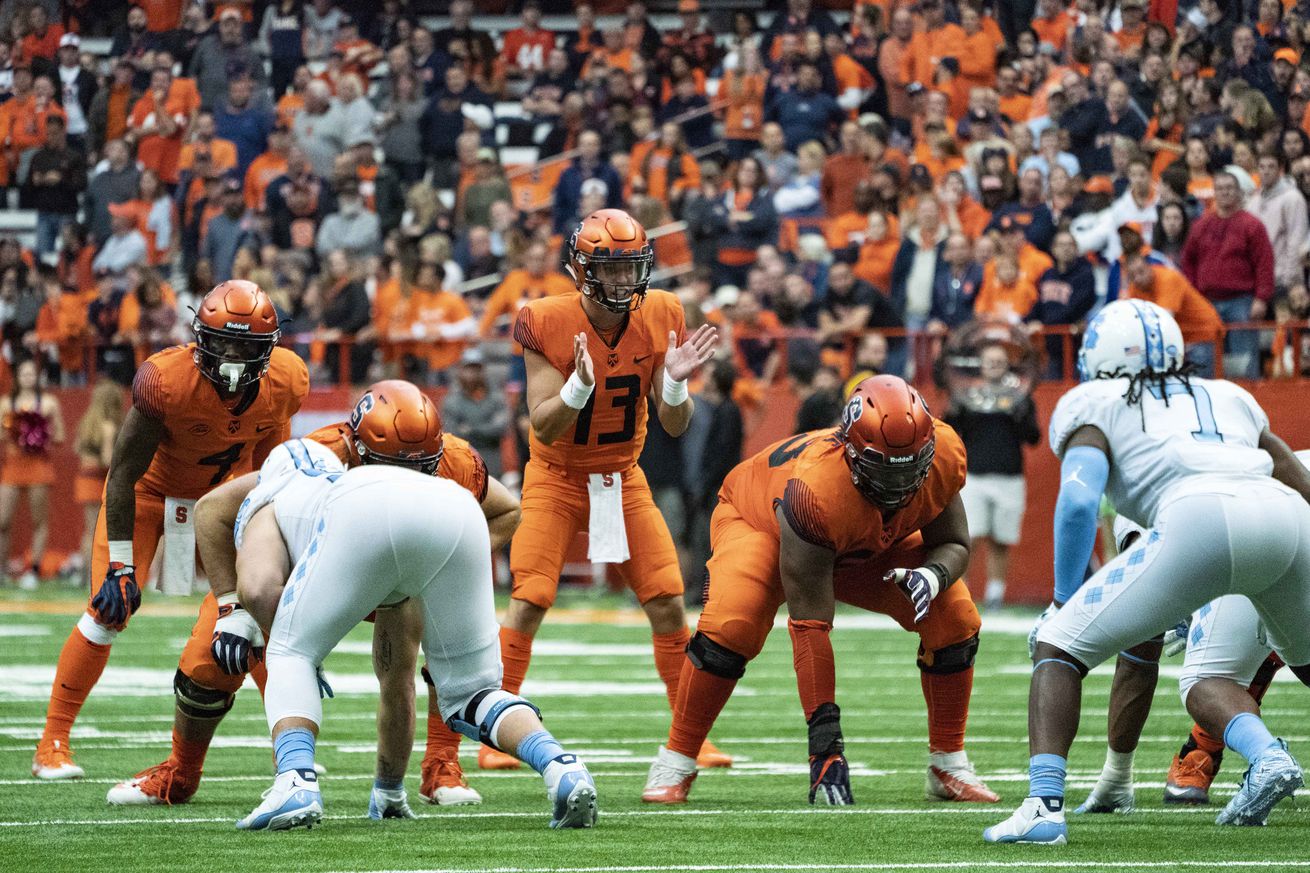 ARE YOU READY FOR SOME FOOTBALL?

First Meeting: If you forgot how long UNC Head Coach Mack Brown has been around college football, let this be a reminder. The 20th-ranked Tar Heels began their 8th season during Brown’s first stint at Chapel Hill in 1995 with a home game against Syracuse. There, a redshirt freshman by the name of Donovan McNabb led ‘Cuse to a 20-9 victory at Kenan Stadium. Whatever happened to him?

Last Meeting: Tommy DeVito got to experience what it was like being thrown into the frying pan, as he replaced a struggling Eric Dungey in the fourth quarter of SU’s 2018 game against the Tar Heels trailing 27-20. DeVito proceeded to throw three touchdown passes – two of those in overtime – to lead Syracuse to a 40-37 victory in the second overtime period.

Coach Bio: Brown escaped from the depths of the ESPN college football analyst pit to return to one of the two schools where he has served as the head coach for at least 10 years. Brown first led the Tar Heels from 1988 to 1997, where the boys in baby blue made six consecutive bowl appearances and achieved three 10-win seasons. He went on to lead Texas from 1998 to 2013, where he notably won the 2005 BCS National Championship over USC. Brown was elected to the College Football Hall of Fame in December 2018, but the game called him back to replace Larry Fedora at UNC for the 2019 season.

Last Year: A 7-6 record doesn’t sound too impressive, but when you consider that the Tar Heels only managed five wins over the previous two seasons, there was reason for celebration in Chapel Hill. During that season, Brown passed Dick Crum as the winningest coach in UNC history with his 73rd Tar Heel victory, over Duke. The 2019 season also saw seven Tar Heels make an All-ACC team.

Last Game: As the Tar Heels were bowl eligible, they went to the Military Bowl to play Temple. UNC dominated the Owls 55-13 for the program’s first bowl win since the 2013 Belk Bowl. The Tar Heels collected 262 more yards of offense than the Owls in the win.

Somehow a former quarterback has become one of UNC’s most fearsome threats on the defensive side of the ball. Chazz Surratt initially came to Chapel Hill to play quarterback, but only appeared in 10 games across three seasons under center. He switched to linebacker for the 2019 season and proceeded to earn runner-up ACC Defensive Player of the Year honors. A couple of media outlets, including CBS Sports, have picked Surratt as a preseason first-team All-American.

If Syracuse Wins: LADIES AND GENTLEMEN, WE’RE GOING ALL THE WAY 11-0 AND NO ONE CAN STOP US NOW.

If Syracuse Loses: It’s the expected outcome and we all move on with our lives. As long as the Orange comes out unscathed (knock on wood), it’s good practice for the team to work in a game situation under two new coordinators.

Fun Fact: I mentioned Brown went to ESPN to serve as an analyst between his time at Texas and his second UNC stint. What fans might forget is that Brown was the color commentator for Syracuse’s 27-24 victory over Clemson in 2017. Ah… good times.