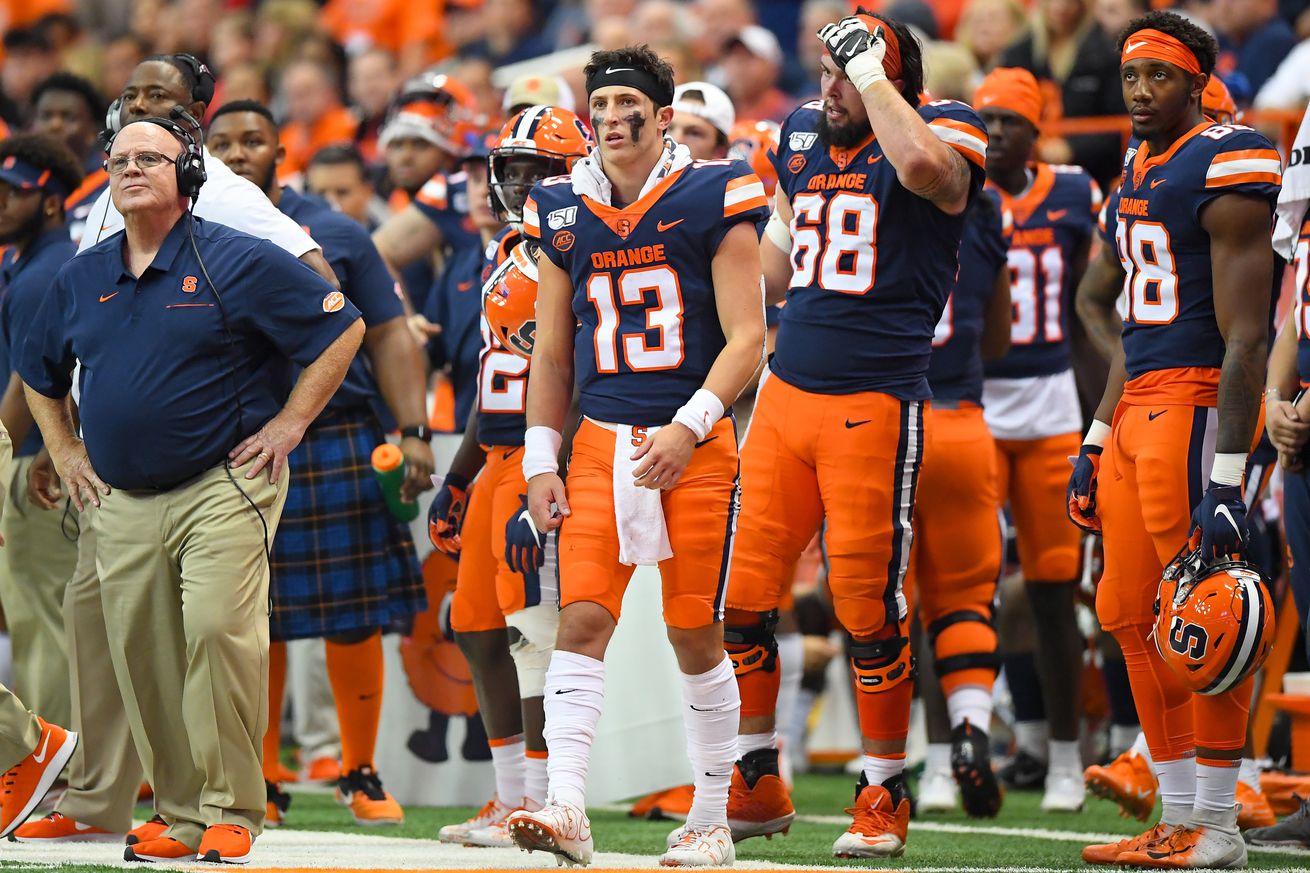 CAN SOMEONE SAY BIG EAST?

Line: Syracuse opened as 19-point underdogs, and that’s floated up to -22 at a couple of places.

First Meeting: Syracuse has faced Pittsburgh more than any other team in its history, so you’d expect this series to have a really early origin story. The first ever game between the two programs was held in 1916, which the Panthers won 30-0.

Last Meeting: Clayton Welch needed to play the majority of the game after Tommy DeVito took a hard hit in the first quarter in 2019. Pitt proceeded to tee off on a struggling offensive line and an inexperienced signal caller to record nine sacks. Somehow, things ended in a one-possession game after a late fourth quarter touchdown by SU, but nonetheless the Panthers won 27-20.

Coach Bio: Narduzzi played for his father, Bill, at Youngstown State University for one year before transferring to Rhode Island for the remainder of his collegiate career. He played linebacker and was a three-year starter for the Rams. Narduzzi’s big break was with Cincinnati 2004, where he was Mark Dantonio’s defensive coordinator for the Bearcats. He followed Dantonio to Michigan State in 2007 where he held the same position on his staff. Narduzzi moved to Pittsburgh to become its head coach for the 2015 season and has stayed there since. Since his tenure with the Panthers, Pittsburgh is tied with Virginia Tech for the third best record in ACC play with both programs boasting 24-16 records. Only Clemson and Miami hold better ACC records over that time frame.

Last Year: Pitt went 8-5 in 2019, including a win over then-No. 15 UCF. The Panthers went 4-4 in ACC play and finished 3rd in the ACC Coastal division. Pitt was rewarded with a trip to the Quick Lane bowl, where they edged out a 34-30 victory over Eastern Michigan.

Last Game: The Panthers got their plus-one non conference game out of the way with a demolition of Austin Peay, 55-0. Pitt had six rushing touchdowns in the contest, something to watch for after SU displayed some struggles stopping UNC’s rushing attack. The game was so bad that both Pitt and Austin Peay agreed to play 10 minute quarters in the second half. It’s not too often you see some sort of a mercy rule get pulled out in a college football contest.

“Fear Me, I’ve Killed Hundreds of Timelords”: Chazz Surratt created problems for Syracuse against UNC and another linebacker is in prime position to do so this week. Cam Bright picked a half sack against the Orange last year and a half sack against Austin Peay last week. To make things worse for DeVito and co., Bright earned Pitt’s highest pass rushing grade from Pro Football Focus against Austin Peay with an 84.4.

If Syracuse Wins: Perhaps we should be the ones complaining on Sunday if we’re not ranked, unlike a certain opposing head coach.

If Syracuse Loses: Realistically, it’s another opportunity for the units on the team to gain chemistry. At the very least, all the necessary motivation is gathered to greet the new Carrier Dome roof with a win next week.

Fun Fact: The last time Syracuse faced back-to-back ranked opponents to start a season was in 2001, where the Orange lost to No. 10 Georgia Tech and No. 8 Tennessee. That year, Syracuse went 10-3 and won the Insight.com Bowl.