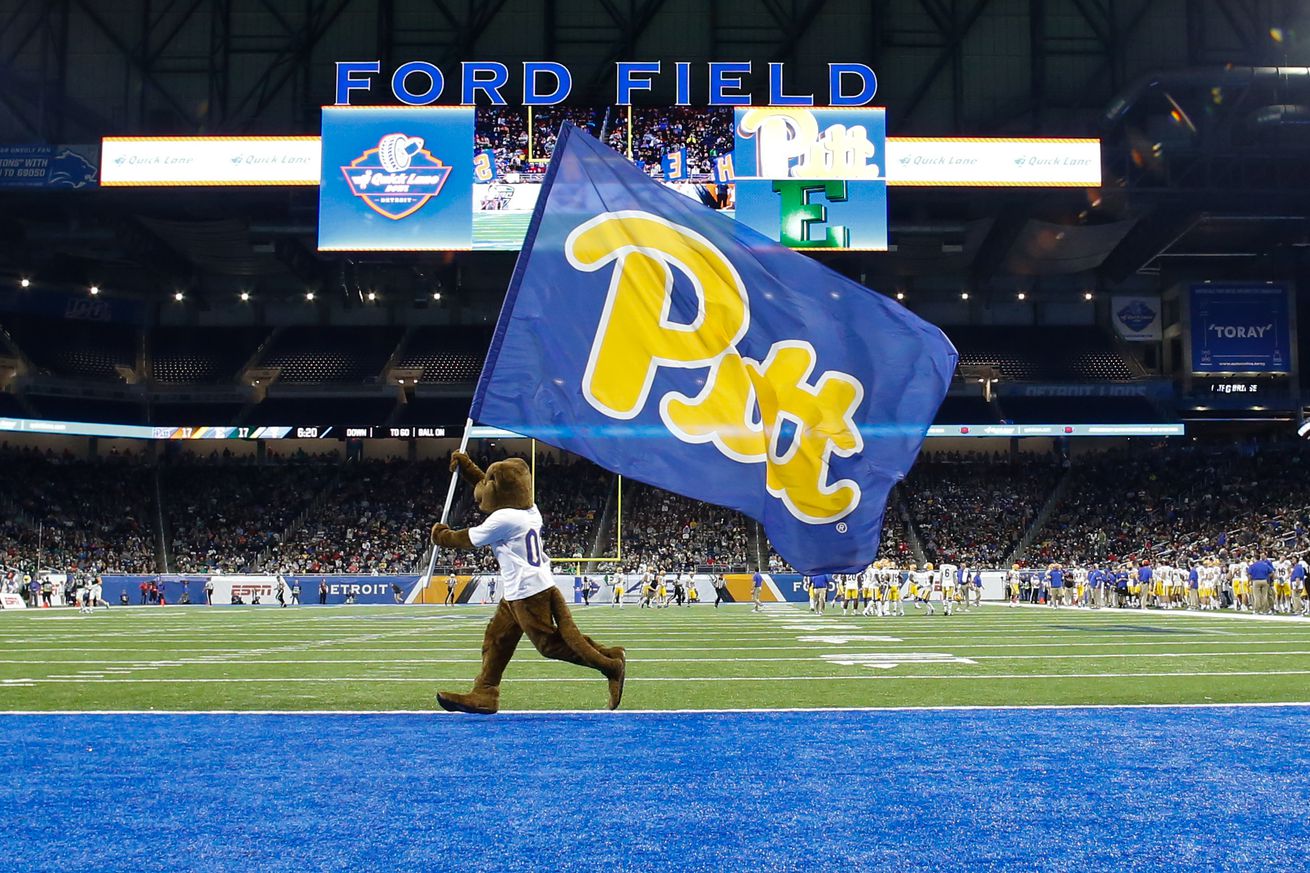 After a disappointing start to the season, the Syracuse Orange (0-1) (0-1) football team is back in action this Saturday against the sort-of-rival Pittsburgh Panthers (1-0) (0-0). Pitt ran past Austin Peay, 55-0 in a week one tune-up and as a reward, they’re now ranked in the top 25 — making them the second straight SU opponent with a little number next to their names. “Cool.”

Since we’re not Pitt fans, we went ahead and asked one about what to expect in this game. Cardiac Hill’s Anson Whaley (who you can follow in Twitter) joins us to talk all about the Panthers. You can check out those responses below. We also provided some notes on Syracuse at Cardiac Hill, which you can read here.

We meet again! Any changes on the Pitt side around whether this “rivalry” matters or not?

Man, with COVID running around, etc., I think fans are just still sort of easing into the fact that there’s a season happening so it’s a little tough to say. We’re just in such crazy times that a lot of these sorts of questions have sort of gotten lost. I honestly hadn’t given it much thought just with everything else going on.

What you’re really going to need for it to become a bigger rivalry is for one team to knock off the other when they’re a top five program or something like that. Something where the loss really hurts one of them. That’s how it happens. It’s just tough when both teams are often either not ranked or ranked at the bottom end of the Top 25. Pitt has been the better program lately but, let’s be honest — they’ve hardly made much of a national splash other than an occasional big win.

A big problem is that most Pitt fans are always going to consider Penn State and West Virginia as bigger rivals just because of the history — even if they’re not actually playing games. It’s sort of like, how many rivals can one school have? The idea sort of gets lost after the first one or two, right? Everyone can’t be a rival and, even if Pitt isn’t playing Penn State and West Virginia on an annual basis, those are going to be seen as the school’s truest rivals, I think, just because of the history. At least until, as I said, you get a game between the two that really means something.

I think most like Narduzzi. I mean, he certainly doesn’t appear to be in any kind of job trouble and he’s sort of helped Pitt get to a next level after a string of .500 seasons. He’s won eight games three times and now he’s got the task of getting to the 9-10 win level.

No one expects Pitt to be competing for national championships right now. But he can’t hover at 7-8 wins forever, either. After all, Pitt briefly got to the 9-10 win level under Dave Wannstedt and some fans wanted to run him off. There’s already a bit of anxiousness for Pitt to achieve more and it’s a shame that COVID sort of put a dent into Pitt’s season with a shorter, revamped schedule that’s markedly more difficult because the Panthers were poised to get there this year, I think. To me, he’s doing perfectly fine.

I do think Pitt deserved to be ranked coming into the season but I also understood the hesitancy to do that. They still had questions in the backfield. They lost both starting corners to the NFL and to injury. Then they lost their best player, preseason All-American Jaylen Twyman, who was a beast on the defensive line. I knew they had quality depth but most people outside of Pittsburgh really didn’t. So you look at that as a voter and it makes sense to leave them out. I had no problem with it and the reality is that we still don’t know if this is really a Top 25 team yet.

I’m at a loss about what to think of Kenny Pickett. How do Pitt fans view his career to this point?

Pickett has definitely improved and I think most fans are good with him. He got to 3,000 yards last year and while I don’t know that he’s a playmaker yet, he’s certainly an above average quarterback. Head coach Pat Narduzzi said over the summer that he’s going to have a long NFL career, which seems like a reach. But he was so sharp in the opener and while we can talk about the competition since it was against Austin Peay, his backups struggled a good bit. To this point, I think fans are satisfied but so much of his legacy will be built on what he does this year and, if he returns next year, on that season as well.

Again, I don’t know that we can put Pickett in the ‘great’ category yet. But he’s clearly improved and is more of an asset than a question mark right now.

Pittsburgh’s defense obviously looks great right now, and did last year too. What is it that makes this such a special group?

Narduzzi came in as a defensive guy, obviously, and I think the one thing he’s really built up is quality depth. They lost both of their corners from last year, were missing an All-American defensive lineman, and still pitched a relatively easy shutout last weekend. Austin Peay or anybody, that’s still impressive.

Narduzzi has brought guys in that are really pushing others and it’s making everyone better, by my estimation. Look at one of their linebacker spots, for example. They had a pretty touted recruit Chase Pine, who’s now a senior and was expected to win a starting job. He gets beat out by a sophomore, Wendell Davis, that didn’t play a ton last year. You’ve got their top recruit in this year’s class, defensive end Dayon Hayes. He’s not even on the two deep depth chart. He gets in there in the fourth quarter and has two sacks. There’s just a lot of depth there and some very good players that could start elsewhere are backups right now. Safety Paris Ford is a legitimate All-American talent. Even missing players, the defense is still quite good.

Syracuse looked alright for three quarters against UNC before the defense got exhausted. Anything you’re taking from the Orange’s efforts in week one?

If I’m Pitt’s coaching staff, I’m preaching to my guys not to get complacent. Not to look at the spread, none of that. I didn’t see the game but it was 10-6 going into the fourth quarter and the Tar Heels are a Top 20 team. Offensively, it looks like they’ve got some work to do. But it can’t be a team that Pitt takes for granted by any means. I expect Syracuse will be hungry and trying not to start the season in an 0-2 hole.

Name one unsung Pittsburgh player that Orange fans should get a little more familiar with.

Wide receiver Jordan Addison is probably the guy most Orange fans haven’t heard of yet but he’s drawn rave reviews from coaches and was one of Pitt’s top recruits in this year’s class. He led the team with seven catches last week and while all of them were shorter, he’s maybe become Pickett’s top target already. There was talk of that in camp, too. Now, Pitt was missing two of its other top receivers last week, along with the starting tight end, so he likely got a few more looks than he otherwise would have. But he’s also the team’s starting return man and, as a true freshman, that tells you all you need to know about the coaching staff’s confidence in him. Narduzzi is already making Antonio Brown comparisons — and Addison’s played one game as a true freshman. The comparison was kind of a flippant one but, you get the picture.

I’ll be interested to see how the coaches work him in when they have all of their receivers in there and healthy because he’s clearly going to play.

Who’s one SU player that you’re very concerned about going into this game?

It’s gotta be receiver Taj Harris. He had a long touchdown grab against Pitt last year and if the Orange are going to beat Pitt, I think offensively, they’ll have to do it in the air. Pitt’s secondary did well last week but there are still questions about the corners. One of Pitt’s guys got beat last week on a deeper throw and while they’ve got one senior on one side of the field in Jason Pinnock, they’ve also got quite a bit of inexperience behind him with all underclassmen on the depth chart. I think Harris actually beat Pinnock on that play last year and, I’m guessing, that’s who will be covering him in this game.

Fortunately, Pitt’s safeties are really a strength of the team with Paris Ford and Damar Hamlin, so they can hopefully minimize any damage. But Pitt certainly has some vulnerability at corner.

Pitt’s favored by three scores. What would Syracuse need to do to pull off the upset?

I think it’s got to be a low-scoring game. I don’t see Syracuse winning a shootout and they’ll probably need to cause some havoc defensively. Maybe even a game-changing type of play like a turnover deep in Pitt’s end of the field, big special teams play, etc. I could see Syracuse winning something like a 17-14 game but it’s harder imagining them win if they need to score more than 20 points. If I’m Syracuse, I’m coming right out and testing Pitt’s corners to see what they can do there. That’s a big area of concern for me as a Pitt fan.

Prediction time: Who wins this one and why?

I’ve got to take Pitt in this one. While I don’t think Pitt’s offense is as good as it showed last week, it’s better than maybe what some of us thought. The question will be if they run as well as they did against Austin Peay to really open up the pass. I’m not fully convinced that Pitt’s run game questions are solved, though they seem to have a decent multi-back unit capable of making some things happen. You combine an improved offense with a talented defense and you wind up with a pretty good team. I’ll say something like Pitt 27, Syracuse 13.

Thanks again to Anson for taking the time out to answer these. Be sure to follow Cardiac HIll and check out the site too, for all things Pittsburgh.