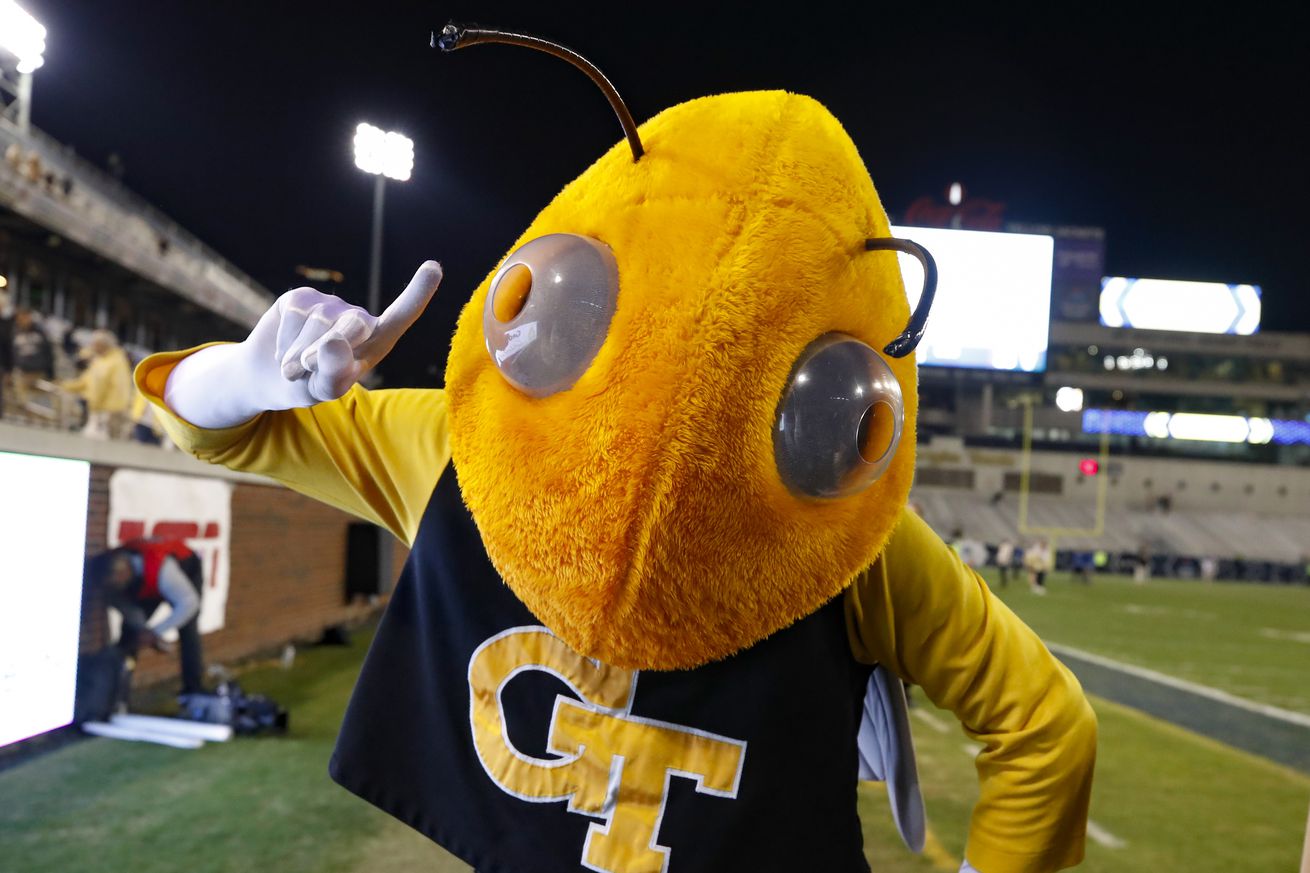 We’re in the same conference – really!

Two games against top 25 opponents, two losses for the Syracuse Orange football team (0-2, 0-2) to start the 2020 schedule. SU will get a break from ranked teams this Saturday, however, when they finally return home to face the Georgia Tech Yellow Jackets (1-1, 1-0). Tech squeaked by Florida State to kick off the season, then was stomped by UCF last Saturday. They’re still in the process of transitioning away from Paul Johnson’s option offense, but also seem like they may be ahead of schedule in that task. So, “great” news for us.

Since we’re not Georgia Tech fans, we went ahead and asked one about what to expect in this game. From the Rumble Seat’s Josh Brundage joins us to talk all about the Yellow Jackets. You can check out those responses below. We also provided some notes on Syracuse over at FTRS, which we’ll link to once they’re live.

This is the first time Syracuse and Georgia Tech face on another on the gridiron since (shudders) 2013’s disaster. This conference is bad at scheduling, right?

Yeah, we really need to switch to pods. It’s ridiculous that it has taken this long for Tech to come up to Cuse to play. There’s a lot of teams in the Atlantic I wish we would see more often, especially since we’re stuck with the permanent crossover game of Clemson every year. It’s also frustrating that we don’t play FSU more regularly since they’re one of the geographically closer teams in the conference.

How’s the transition away from Paul Johnson’s option attack going?

Well certainly better this year than last so far, that’s for sure. It looks like Tech has found a QB in Jeff Sims. He’s a true freshman with an incredibly high upside, but he’s learning on the job this season. Our O-line also looks night and day better than last season, and that’s a huge testament to our O-line Coach Brent Key, who we swiped from Alabama. We have excellent receivers and running backs to support our young QB, so we’re just hoping to see progress and growth over the course of this season… for as long as it lasts. You’ll still see our offense incorporate a bunch of option elements into the game on Saturday.

What were the keys to the victory over Florida State, and how did UCF put a stop to at least some of them last week?

I think the key to victory over FSU was the offense under Sims looking entirely different than anything we put on the field last season, so we got some of the element of surprise in the first game. Against FSU, the defense also harassed their QB for much of the game and forced him into bad throws and decisions. They scored a TD on the first possession of the game, and then that was it besides 2 field goals. The defense largely won that game.

Against UCF, Tech had 4 defensive starters out, and 3 of them were on the line. They struggled to get consistent pressure on their QB, and it usually gave their QB enough time to find open receivers. Tech hung with UCF until the 4th quarter where we had a couple bad turnovers which resulted in them scoring 21 unanswered points and running away with the game at the end. Tech’s youth showed in the 4th quarter, and I’m not sure there’s much we can change about that this season.

What’s the most surprising aspect of this young season so far? (other than it happening to begin with)

For us, it has definitely been Jeff Sims. I’m so excited to watch him for 4 more years on The Flats. Despite some bad throws in the first 2 games, he looks poised on the field and doesn’t panic. He’s missed some reads, but he has an incredibly high upside and is just plain fun to watch.

Across football, the most surprising aspect for me is that UNC hasn’t gotten popped for paying their recruits yet. Their bagman game took a massive step under Mack Brown basically overnight, and it has been truly impressive to watch.

The Orange do appreciate a good punter. Where do you think Pressley Harvin III ranks among the ACC’s punters?

We appreciate him too, and unfortunately we need him more often than I would like. I don’t know if there’s anyone better than him in the NCAA right now. The kid is a weapon, and he deserves all the praise and awards he receives. I love that he becomes someone’s new favorite player every time he steps on the field. With both of our games this season being on ABC prior to this one, he’s gotten a lot of national exposure, and we’ll definitely see him on Sunday’s sometime soon.

Jeff Sims has been picked off four times, but he seems to be a capable passer. What’s the most impressive part of the freshman QB’s game?

I think the most impressive part is how even-keel he is. He doesn’t panic, and he’s able to make things happen with his feet when the play breaks down. I wish he would keep his eyes downfield more when he scrambles, but he has looked good in the pocket so far, and it has been more than a decade since I said that about a Tech QB. He’s made some very impressive throws and reads, but also thrown some bad picks. I’m very excited about the future of Tech football with him at QB.

Name one unsung Georgia Tech player that Orange fans should get more familiar with.

He was out last game, but the Orange should keep an eye for DL Curtis Ryans. He seemingly came out of nowhere against FSU and had 2 sacks and 2 forced fumbles to go along with 3 tackles otherwise. We certainly missed him last week, and I’m excited to see if it’s more of the same this week against the Orange.

Is there any specific Syracuse player that most concerns you heading into this matchup?

Tommy Devito definitely gives me the most concern, and not just because I’m assuming he has deep NY mob ties with that name. I don’t want any of Tech’s players “swimming with the fishes” if they get a hit or two on him.

For as long as I’ve been alive, the Tech defense has struggled to contain mobile QBs, and so I’m not looking forward to stressing about that all afternoon. Tech will need to get pressure and force him into some mistakes, while not letting him scramble, if we’re going to have any luck on Saturday. That all sounds much easier said than done.

Georgia Tech’s favored by a little over a touchdown. What does SU have to do to pull off the upset?

I feel like this applies to any game, but against this Tech team especially, Cuse will just need to force some turnovers. The Tech offense has been turnover-prone so far in this young season and coming out positive in turnover margin will go a long way towards in upset.

Prediction time: Who wins this one and why?

I think we see Jeff Sims make a few less mistakes this game and Tech edges out a victory but doesn’t cover… somewhere in the 28-24 range. This will hopefully be the first game this season that Tech wins the turnover battle. I also think DeVito scares the hell out of us for most of the game.

Thanks again to Josh for taking the time out to answer these. Be sure to follow From the Rumble Seat and check out the site too, for all things Georgia Tech.