SOUTH BEND, In. — One-win Syracuse stood where no one thought they’d stand in the second quarter against No. 2 Notre Dame: ahead on the scoreboard. The Orange punished the line of scrimmage, smothered the Irish passing game and moved the chains against the conference’s best team.

But that shifted after one penalty, a roughing-the-passer call where Kingsley Jonathan hit Ian Book’s helmet after he released the ball on third down. Three plays later, Book juked by Aman Greenwood, ducked under his wide receiver Javon McKinley and reached across the goal line.

That penalty, along with a Rex Culpepper fumble on the next possession, handed the Irish a 10-point lead they wouldn’t relinquish.

Syracuse’s season ended with a whimper, just as it began. Like the September loss to UNC, Syracuse stayed within shouting distance for 25 minutes in South Bend, even leading for a brief period, before imploding.

“We made a couple mistakes in coverage which led to people being wide open. That’s going to happen when you’re a young team playing an experienced team like Notre Dame,” freshman Garrett Williams said of the second-quarter letdown. “I think it’s things we can fix going into next season.”

Dino Babers and Greg Robinson are the only SU head coaches to have one-win seasons post-1948.  This didn’t happen in Babers’ first year, with sophomore Eric Dungey; when Scott Shafer’s offense scored under 20 points per game or while Doug Marrone picked up the debris of a tumultuous four years under Robinson.

“Our record is what is what is, but it doesn’t act like, nor does it feel like our record,” Babers said. “I understand what (the 1-10) record is. It’ll be with me for the rest of my life.”

In 2005, the Orange’s lone victory came against Buffalo. Syracuse scored under 14 points per game and never scored more than 20 in conference play. But unlike the 2020 version of Syracuse, the 2005 team had the luxury of playing more than one non-conference game.

Babers, though, has never used that as an excuse for the poor record. Instead, he’s pointed to Syracuse’s youth. At least five freshmen started in each of the past three games.

“You guys are going to be good, just stick with it,” Babers recalled Notre Dame head coach Brian Kelly telling him pregame.

On Saturday, the team gave him much to be optimistic about. The defensive line dominated the best offensive line in the nation, according to Pro Football Focus. Senior quarterback Book was left with little time to throw, and the press coverage of Syracuse corners Ifeatu Melifonwu and Williams was unbreakable for McKinley Williams and Ben Skowronek.

Marlowe Wax pressured Book on one play, and Skowronek dropped the pass. The Syracuse bench pointed and laughed at the fifth-year senior. By the second quarter, that energy was pervasive on the Orange sideline. A bruising Lee Kpogba hit caused the Orange to leap into the air.

On the other side, the favorites were silent. The 6,831 in attendance were stunned when an underthrown pass was carried into the end zone by Anthony Queeley. He jumped in the air as Babers pumped his fist. For a few moments, it seemed the injury-plagued and opt-out-infested Orange could do the unthinkable: ruin Notre Dame’s playoff chances.

But Jonathan’s penalty and an Irish touchdown ensued, bringing the crowd to its feet.

After a lengthy review to determine whether Culpepper’s knee was down before he fumbled and handed the ball to Notre Dame, Book once again punished the Orange, firing a touchdown to McKinley.

The Orange sideline that had been bustling was now motionless. Babers held his hands on his hips as Nolan Cooney fired off another punt and McKinley hauled in a touchdown to make it a 17-point lead at the half. Melifonwu sat up, asking for a push-off, but the ref signaled touchdown. In less than four minutes, Syracuse’s lead evaporated into a three-score deficit. 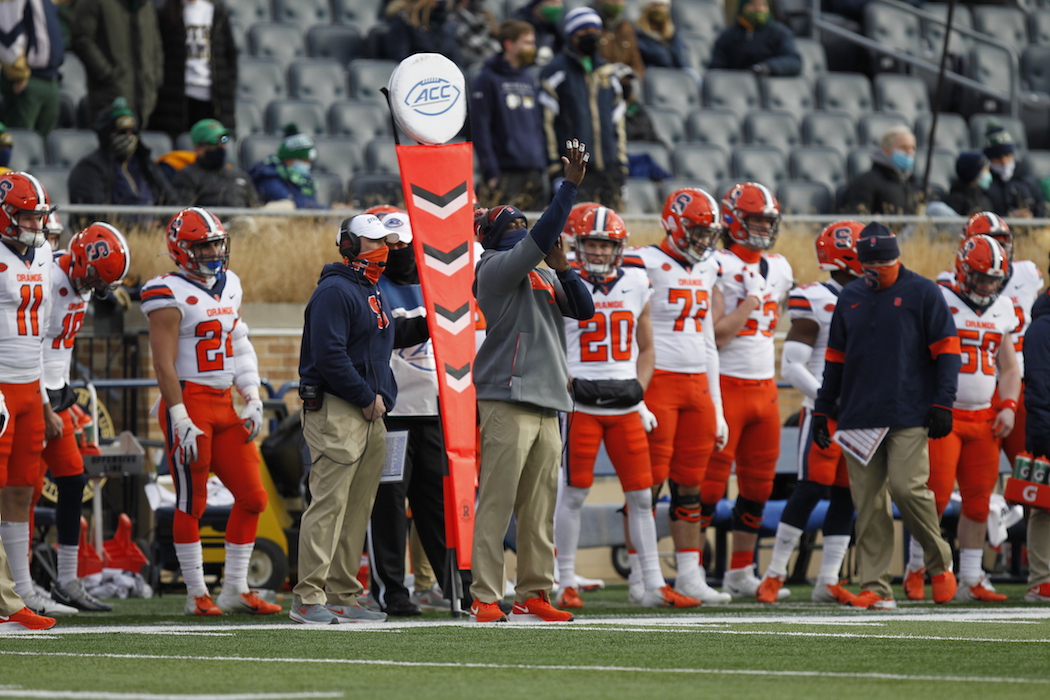 With Syracuse’s loss to Notre Dame, the Orange secured their first one-win season since 2005. Courtesy of ACC

But SU returned in the second half with that same game-opening energy. After tight end Aaron Hackett fumbled near the Notre Dame sideline, Wax jumped on Book’s fumbled snap. Sean Tucker’s 40-yard touchdown cut it to a two-score game.

Following a Ja’Had Carter interception, Syracuse parents in attendance stood on their feet and clapped as Culpepper took the field. SU had a chance to cut the lead even further and potentially avoid that 1-10 record.

But the parents took their seats on the next play, when Culpepper fumbled for the second time. One slapped the bleachers with a towel. Another threw their arms in the air.

Babers meanwhile, stood and stared at the field, at the fumble and at what was about to become his worst single-season record as a head coach. The Orange had opportunities, but three ill-timed turnovers and one penalty turned a statement win to a three-score loss.

“We have to take the knowledge that we learned and take it into winter workouts, what we do in the spring and all the way into the summer to make sure we don’t have this taste again in our mouths,” Babers said.

The evaluation of personnel, both playing and coaching, will come in due-time, he said. Decisions on whether seniors will return next season, given the NCAA’s ruling on eligibility, are yet to be made. But Babers, amid a season-ending, eight-game losing streak, is hopeful for 2021. 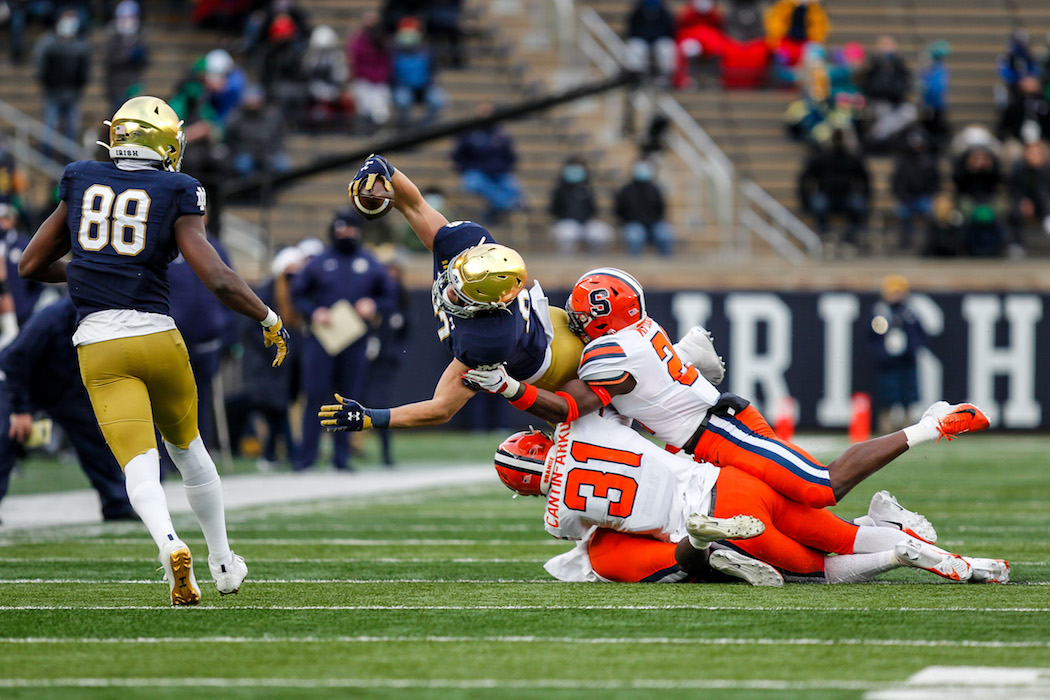 That sentiment, partially due to the play of the freshmen, has evolved over the season. Impressive performances against No. 3 Clemson, NC State and No. 2 Notre Dame provide glimmers of hope, signs that the younger players are growing, he said.

But the 1-10 record is also a sign of what’s missing. The freshmen are not strong enough to compete at an ACC level. There’s even guys that can’t out-lift the 59-year-old Babers.

After time expired, Babers jogged off the field toward the locker room, away from Syracuse’s worst season in over a decade. He was optimistic that the first 25 minutes, not the last 35, are a sign of what’s to come.

The post Syracuse unravels at end of 1st half, falls to No. 2 Notre Dame 45-21 appeared first on The Daily Orange.