Saturday afternoon in the Carrier Dome, Syracuse’s offense wasn’t the main issue. The unit managed to score 15 goals against the back-to-back defending NCAA champions. The problem, rather, was the defense, which couldn’t stop No. 6 Virginia’s plethora of offensive weapons in the first or third quarters, allowing sizable runs that the Orange ultimately couldn’t overcome.

Syracuse’s defeat against UVA capped off a five-game losing streak, the program’s longest since 1975. With 18 goals through three quarters, the Cavaliers were on pace to score the most goals on a SU defense since a 24-8 defeat against Hobart in March 1977, but Virginia let up at the end by replacing its starters with substitutes.

The uneven defensive showing meant SU (4-9, 1-4 Atlantic Coast) couldn’t upset No. 6 Virginia (10-3, 5-1 ACC) in the teams’ second meeting this season. UVA won the first contest back in February, 20-11, by jumping out to a seven-goal lead in the first quarter and then using another seven-goal run to bury the Orange after halftime. Saturday afternoon, the game flowed the same way as Syracuse gave up a 5-0 run in the first quarter, and then a six-goal one after halftime.

“They showed up offensively from the start and took advantage of our mistakes, and unfortunately we kept making them and let them build a lead,” head coach Gary Gait said.

The first-quarter slide has become routine for Syracuse amid a historically poor season. It trailed 9-0 in a loss to Notre Dame, 4-0 against Maryland and 8-1 the last time it played Virginia. In the Dome, SU trailed 5-1 despite scoring the game’s first goal.

The slip up started when Jakob Phaup won the ball cleanly out the backdoor but misplaced a pass straight to UVA attack Connor Shellenberger. Phaup finished a solid 20-of-39 from the faceoff X, but in that moment, he cost the Orange.

Then Brett Kennedy stumbled and fell, allowing Griffin Schutz to make it 2-1. UVA’s Jeff Conner capitalized on a short-stick matchup with Max Rosa to come from X and score, and Matt Moore picked out a teammate to further extend the lead.

“We knew we had to help on defense and support and slide and help each other, and unfortunately we just weren’t getting rotations done as a team,” Gait said. “Way too much time and room for a lot of their shots.”

Just eight minutes into the game, Gait replaced starting goalie Bobby Gavin, who allowed five goals and made just one save, with Harrison Thompson. The backup helped stabilize SU, at least for a period before halftime. He made a second-quarter save against Shellenberger that helped set-up a Jacob Buttermore goal on the other end, making it a 6-5 game. 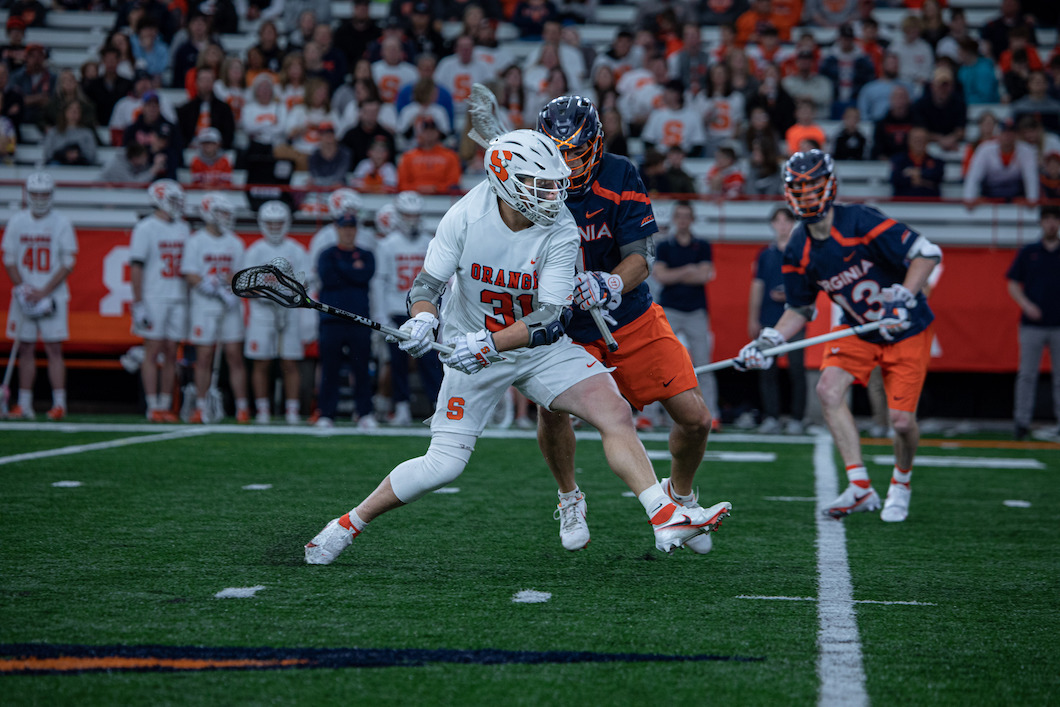 Syracuse’s loss against Virginia handed the Orange their first season with at least nine losses since 1974. Trent Kaplan | Staff Photographer

Syracuse’s brief comeback leaned heavily on rising star Jackson Birtwistle, the freshman midfielder who made his first career start. Birtwistle was on the end of a long pass from Matt Magnan, who squeezed by two attacks to clear the ball. In transition, Birtwistle showed a flash of speed and scored to make it 5-2. He was on the end of a Brendan Curry skip-pass and pinged the bottom left corner to score SU’s fourth goal.

Yet Virginia hung around. Conner unloaded a monstrous step down shot after Moore passed him the ball from X. Landon Clary, the long-stick midfielder in the vicinity, could only put both hands in the air and ask defensive coordinator Dave Pietramala what he should’ve done after the goal.

The Cavaliers widened the margin to five by halftime, scoring consistently on SU’s defense. Payton Cormier got the better of a short-stick midfielder Brandon Aviles for a goal, and Xander Dickson cut to the cage and caught a pass from Shellenberger on the edge of the crease.

The Cavaliers regularly threatened in transition, including two goals from faceoff specialist Petey LaSalla. Midfielder Jack Peele scored his second goal of the season for UVA, capping off a coast-to-coast shift after Buttermore saw his shot saved at the other end.

“We do work on it, but it doesn’t look like it sometimes,” Gait said of transition defense. “Our game plan there was to slide to them but slide late, and instead we slid really late and let them come right in.”

The five-goal deficit only worsened after halftime. Grant Murphy was too slow sliding to Dickson, who scored Virginia’s 13th goal. Thompson made a save on an initial shot but spilled the rebound right outside the crease for Patrick McIntosh to score the 14th.

The scoreboard counter for the Cavaliers just kept climbing. Virginia used a 6-0 run in the third quarter, and Murphy once again slid slowly to Shellenberger on a man-down play for Virginia’s 17th goal.

Birtwistle helped spearhead an SU run at the end of the game when he caught a pass from Curry on the edge of the crease and went behind the back for the goal. He tacked on another in transition during the fourth quarter. The redshirt freshman finished with five goals on eight shots and shined a light on promising future seasons for the Orange amid a down one.

But the defense couldn’t get the stops it needed. Syracuse’s historically poor season got even worse, as it’s allowed over 20 goals in three contests for the first time since 1974. The defeat marks the first nine-loss season since 1974, too.

And now, if Syracuse can’t beat Notre Dame next weekend, it’ll mark the first-ever 10-loss season in the history of the 106-year program.

The post Syracuse suffers historic 5th straight loss in 21-15 defeat to No. 6 Virginia appeared first on The Daily Orange.