The first time it was the freshman. As North Carolina’s Petra Holešínská rose for a 3, Syracuse freshman Kiara Fisher scrambled to contest. Holešínská’s shot missed, but the official’s whistle blew — three shots for UNC. As Holešínská stood at the free throw line, fifth-year Tiana Mangakahia stood at the scorers table, waiting to check back into the game.

Minutes later, it was the sophomore. Holešínská once again rose for a shot from behind the arc. Again she missed and was fouled, this time by second-year guard Taleah Washington.

Syracuse struggled to slow down UNC’s offense, which consistently broke through head coach Quentin Hillsman’s press defense. Syracuse’s fouls, poor defensive rotations and escapable press defense led SU (4-1, 1-1 Atlantic Coast) to its first loss, as the Orange fell 92-68 to North Carolina (6-2, 1-2). For UNC, the victory marks the first ACC win in its last 11 conference games. For SU, the 92 points given up is the most Syracuse has allowed since Feb. 25, 2019, when it allowed 98 to No. 5 Notre Dame.

On possessions where the Orange were able to press and fall back into their zone defense, the Tar Heels often passed the ball to the free throw line — the middle of Syracuse’s zone. As the defense collapsed, shooters became open and three-point shots swished through the net. After scoring first, UNC never trailed.

“They were playing really high,” UNC guard Deja Kelly said. “So kind of just attacking their hips, either getting a foul call or being able to attack and get into the defense and being able to find an open shot.”

As UNC attacked, Syracuse recoiled. After contracting, there were shots SU’s defense never contested. With Orange defenders lurching out on last-second efforts to graze the leather, UNC knocked down five of 13 first half triples.

Those looks were also due to Tar Heel ball movement. After struggling to find offensive rhythm, UNC head coach Courtney Banghart told her players to move the ball rather than their bodies, Banghart said postgame.

Quick passes around the arc, through the middle, toward the baseline and back outside ended in shooters ready palms. As soon as the ball arrived, it was off again — this time in a high arc — floating and ending between the circular nylon. Fast breaks crushed the Orange as well, as the Tar Heels tallied 22 assists and 14 points off turnovers. Kelly continued to find teammates after breaking through Syracuse’s press, on drives to the basket or on swing passes along the three-point line. The freshman finished with eight assists, three more than Syracuse as a team.

Seconds from halftime, Syracuse had already allowed 43 points, four points more than it allowed against Stony Brook or Lincoln in its first two games. Two seconds before the buzzer sounded, the Tar Heels had one last possession.

Kelly drove to the hoop for a desperation shot. Before she got there, the freshman was fouled by Fisher, resulting in two shots from the charity stripe. As Fisher walked past the three-point line, taking up her position on free throws, she rolled her eyes in frustration, hands on her hips.

“Our freshmen, I had to play them a little bit more obviously,” Hillsman said. “And try to play a little bit deeper into our bench to get some combinations on the floor.”

By halftime, Kelly had surpassed her scoring average of 12 points a game, and Holešínská equaled her 12 point average. While Syracuse continued to chuck up open and contested 3’s, UNC stayed picky.

Rather than stepping up in the 2-3 zone to prevent entry passes, Syracuse left UNC star Janelle Bailey open at the top of the free throw line. She finished with a game-high 25 points, and directed most of UNC’s offensive possessions in the half-court. Syracuse couldn’t contain the senior down low either, as Bailey totaled eight rebounds.

Besides struggling not to foul shooters and stop entry passes into the middle of the zone, the Orange had trouble corralling defensive rebounds. UNC finished with 13 offensive rebounds, compared to SU’s 25 defensive grabs. 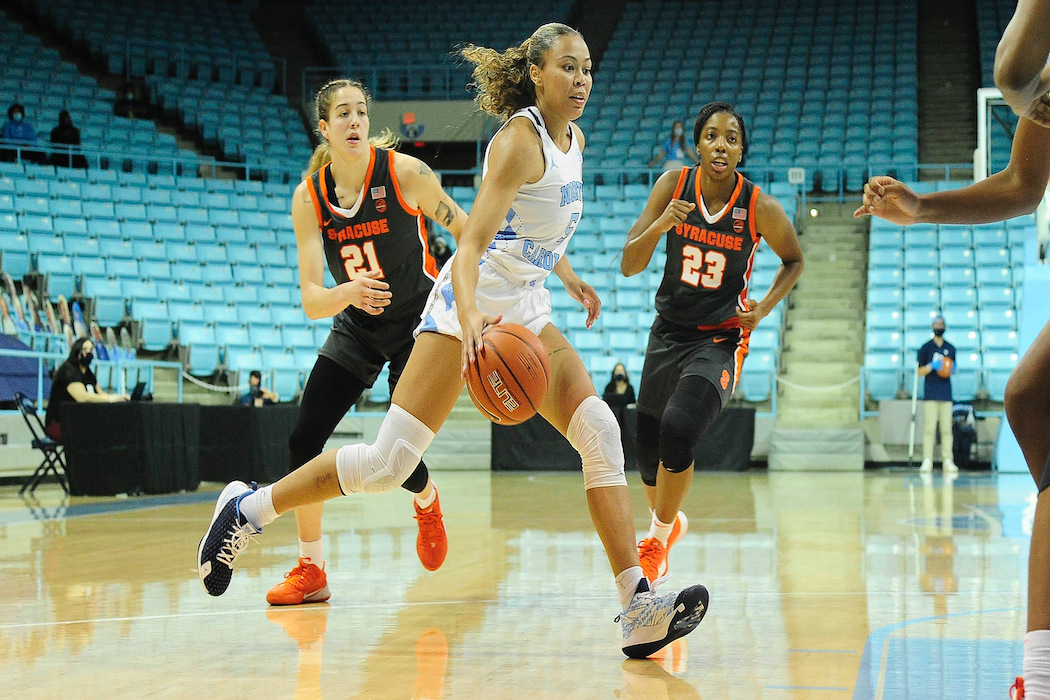 Syracuse struggled to slow down a UNC’s offense, leading to its first loss of the season. Courtesy of UNC Athletics

Midway through the third quarter, the Tar Heels swung the ball around the arc to Kelly. As Maeva Djaldi-Tabdi rushed out to the wing, with her hand raised to contest, Kelly passed up a shot and drove to the baseline.

After squaring her feet and shoulders, Kelly’s shot bounced harmlessly off the front of the rim. North Carolina guard Stephanie Watts was the first to the ball, and reset the offense. With the shot clock winding down, Alyssa Ustby tried from deep. Her miss turned into a long rebound. Again,UNC grabbed the rebound, its second of the possession.

After another missed 3, the Tar Heels corralled another loose rebound before Kelly mercifully stuck a jumper. That pushed Chapel Hill to a 52-37 lead.

Whether it was an inability to maintain defensive rebounds, poor defensive rotations in the zone or a failure to stop UNC drives to the basket — Syracuse couldn’t stop the unranked Tar Heels, which knocked down almost 47% of its shots.

Part of Syracuse’s struggles were also due to Kiara Lewis’ foul trouble. SU’s senior had three offensive fouls — including elbows to her defenders ribs — and played with four fouls throughout the fourth quarter. With Lewis on the bench for almost half the game, UNC’s guards skipped by the press defense. With SU defenders in the rearview, UNC pressured the two SU defenders in the paint, tasked with holding off multiple players barreling towards them.

“That was really tough when you have (Lewis) and Tiana off the floor at the same time, that’s tough for us,” Hillsman said. “And we knew that coming into the season.”

All game long, the Orange continued to play fast in a feeble catch-up attempt. Instead, SU fell further behind. Missed buckets were quickly reversed the other way. As the final quarter began, North Carolina’s offense began to resemble pregame lay-up lines. Again and again quick outlet passes led to fast breaks. And fast breaks ended in easy bounces off the backboard, and into the basket.

After Holešínská continued the lay-up drill, pushing UNC’s lead to 71-48, Hillsman called a timeout. The pause was futile, as the Tar Heels simply continued to drive to the hoop. Eventually, the Heels finished with 14 layup makes.

With 4:26 left and the game out of reach, guard Kennedy Todd-Williams drove, went up-and-under, and tossed the ball behind her, up above the rim.

“And-1!” Todd-Williams yelled as the ball dropped through the basket, giving UNC a 21 point lead.

With Lewis sidelined, Syracuse relied on young players like Fisher, Washington and freshman Priscillia Williams. Near the end of the third quarter, with Syracuse down 19, Washington pressed guard Todd-Williams and reached-in.

As Todd-Williams strode towards the charity stripe, Hillsman crouched underneath the scorers table, his hands clasped. Back and forth he shook his head, sighing deeply. All he could do was watch, as Todd-Williams notched her first two points, and two of UNC’s 24 free throw makes.

After Syracuse didn’t practice over the weekend, time was suddenly limited on Thursday. As the clock on the Carmichael Arena lost precious seconds, UNC steadfastly held to its surprising lead.

“This is my responsibility,” Hillsman said. “I got to do a better job of coaching our team and getting our team ready to play. When you come out and play like this — and you don’t execute and you have this kind of effort — that’s about me, that’s not about them.”