Syracuse’s Friday matchup against Bryant shouldn’t have come down to Marek Dolezaj, a career 71% free throw shooter, shooting a 1-and-1 with 22 seconds left and his team up one point. Or to Bryant playing the free-throw contest by electing for a quick two. Or to the Bulldogs leading for nearly 32 of the game’s 40 minutes.

Practice or not, a game between SU and Bryant, a bottom-tier Northeast Conference team, shouldn’t have come down to the last shot, where Bryant’s Michael Green III front-rimmed a fadeaway 14-footer as time expired.

But that’s what happened, as Syracuse (1-0) escaped with an 85-84 win to open the season. Bryant (0-1) led SU by seven at halftime, prompting head coach Jim Boeheim to say the game should’ve been canceled. His team wasn’t ready.

“I made an unbelievable mistake,” Boeheim said postgame. “You cannot play basketball when you don’t practice, I mean that’s a fundamental thing that everybody knows.”

Still, despite a 2-for-14 shooting performance from Joseph Girard III and an early injury to starting center Bourama Sidibe, SU did just enough to give Boeheim his 40th season-opening win in 45 tries.

This was only the second time in almost two weeks that Syracuse took the court together. COVID-19 forced Syracuse to pause activities and quarantine for 10 days in the lead-up to the 2020 season-opener, allowing the team to practice only the day before its season-opener.

“I think everything was kind of weird for us,” said Dolezaj, who had 20 points.

Syracuse’s season abruptly ended when a win over North Carolina in March opened a razor-thin window to the NCAA Tournament, which never took place. SU then prodded through a bizarre offseason that included socially distanced summer workouts. Now, there are major practice modifications, and players are tested for COVID-19 three times a week.

Boeheim and a player recently tested positive for COVID-19, sending the team into a two-week pause starting Nov. 15. Surrounding Syracuse are postponements and cancellations of games and dozens of programs also halted. But last week, Boeheim said his players were prepared and in great shape.

His team’s performance Friday forced him to recant. Boeheim realized the game shouldn’t have been played about 10 minutes in. By that point, Syracuse trailed 25-21 in an up-and-down affair. Both teams were running a full-court press into a zone, exhausting an out-of-shape SU.

Syracuse started 0-for-4 from 3, and each shot seemed to be short — a sign of heavy legs. Dolezaj left a wide-open finger roll on the front rim and bricked a foul-line jumper off the backboard. Sidibe and Quincy Guerrier missed two free throws each.

Even though Bryant started hot against a Syracuse zone bleeding open looks — going 3-for-3 from deep to start — the team also had a rocky start to its 2020-21 campaign. This wasn’t supposed to be its first game of the season, but when an official tested positive for COVID-19 earlier in the week, Bryant had to cancel its opener against Stony Brook.

“It’s the most difficult thing we’ve had to deal with in our country, in my lifetime, by quite a lot,” Boeheim said on Nov. 12, days before he announced he tested positive. “But I still think we have to find a way through this, to work through what to do whatever we can. If it’s play, we got (26) games scheduled, hopefully we can play them. If it’s 22 or 20 or 15, whatever it is, let’s play the game.”

Syracuse’s defense struggled to locate Bulldogs shooters, especially in transition. Bryant, a team that shot 32.1% from behind the arc last year, nailed 13 in the Dome. After Chris Childs made a corner 3, he let out a yell that rang through the fanless Dome. Bryant rode a blazing 9-for-19 start from 3 into a 51-44 halftime lead.

Not much changed to start the second half. On a breakaway, Girard coughed up a live ball, leading to a wide open Peter Kiss 3-pointer. Nobody picked up the ball in transition. A Hall Elisias dunk and a Charles Pride putback layup then gave the Bulldogs a 7-0 run and a 12-point lead.

“They had a lineup where they went all small guys, five guys that can stretch the perimeter and make plays,” junior guard Buddy Boeheim said. “We’ve got to adjust and be able to stop that better, get to the corner better. We’ve got a lot of work to do, but not being able to practice our defense for two weeks definitely didn’t help.”

Syracuse eventually made defensive adjustments, locating shooters more actively and closing out. Bryant went 9-for-19 from 3 in the first half to just 4-for-18 in the second. SU limited the Bulldogs to 33 points in the final 20 minutes.

And there was still plenty of time left. Guerrier, making his first career start, handled a drop-off pass from Dolezaj for a dunk. On the next possession, Alan Griffin drove baseline and found Guerrier with a bounce pass for another slam. Bryant’s 11-point lead was quickly seven, then three.

A personal 6-0 run from Buddy — on two transition 3s from the same spot on the right wing — brought SU within one with 8:11 left. Later, the zone forced a Bryant miss, which Girard tracked down by half court and lobbed 50 feet to a sailing Griffin for a game-tying alley-oop that would’ve blown the Carrier Dome roof off in any other year.

“I don’t know the last time I played in a game that was that quiet,” Buddy said. “Alan Griffin had one of the best dunks I’ve seen in person, and it was silent after.” 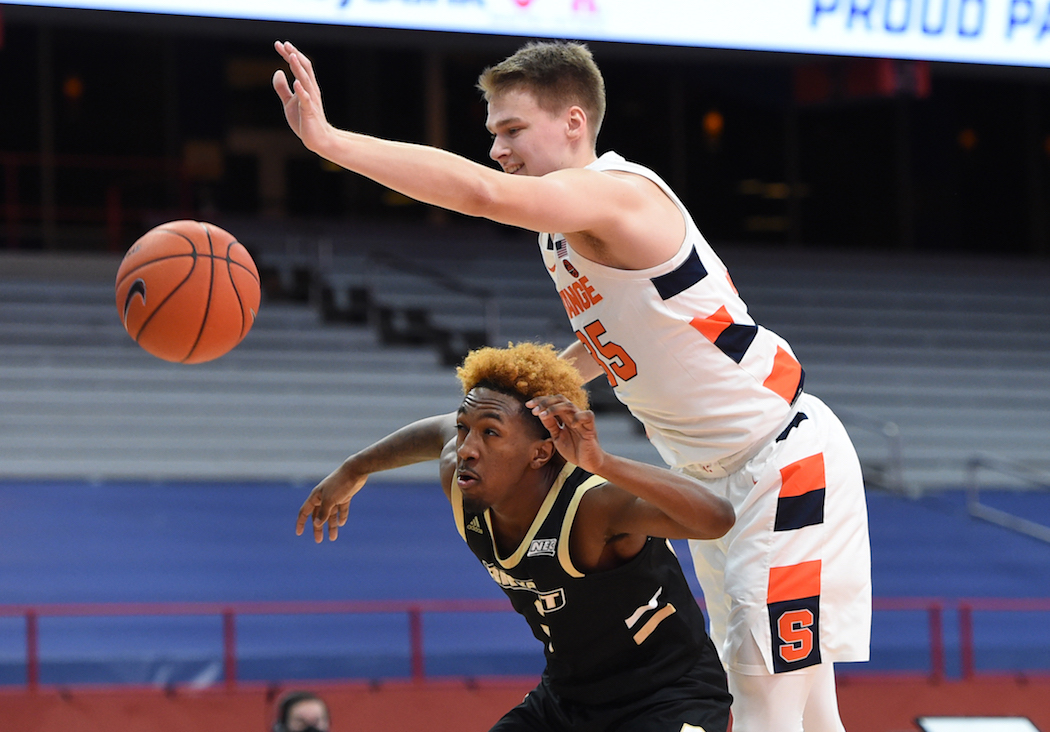 Buddy finished with a team-high 23 points against Bryant. Courtesy of Dennis Nett, Syracuse.com

After Bryant took an 82-80 lead with just over three minutes to go, Dolezaj threw an ill-advised three-quarters court pass, awarding the Bulldogs another possession. It may have been a game-defining gaffe if Girard hadn’t nailed a 3 from the top of the arc on Syracuse’s next trip, his second make of the night.

Then came a frenetic, foul-shot-filled last minute. Dolezaj ripped down a rebound off a Guerrier free throw miss, then missed one of his own, leaving the game in the hands of SU’s defense. Green missed a solid look on the baseline for the win.

Bryant head coach Jared Grasso told reporters after the game that his program gave SU multiple opportunities to push the game back. But Boeheim never tried to formally reschedule the game and said he thought his team was ready to play. For how strange the lead-up to Friday’s opener was, it was only fitting that it played out as bizarrely as it did.

“We’ve got a lot of work to do, and the last 14 days of practice missing were just horrendous,” Boeheim said. “On the decision, the medical doctors make that they’re healthy to play. I make the decision on whether it’s smart to play the game. When you don’t play for 14 days, it’s not smart.”

The post Syracuse scrapes by Bryant, 85-84, to tip-off strange season appeared first on The Daily Orange.