The Syracuse Pulse’s first game ever was still scoreless to start the second half. Pulse defender Kyle Nuel then controlled the ball past midfield while a Flower City Union defender attempted to tackle him. But before the opposing defender arrived, Nuel launched a deep chip pass to Kaleb Jackson, who cut between two defenders in the box. Flower City’s Maykell Ortega ran to intercept the pass but retreated, which gave Jackson enough of a window to head the ball to the back of the net. Jackson’s goal was the game-winner in a 1-0 victory.

“To be fair I didn’t think he was going to go for goal on it, but [Jackson] used his striker mentality to put it in the back of the net,” Nuel said.

Outdoor professional soccer has returned to central New York for the first time since the Syracuse Salty Dogs folded in 2004. The Pulse, a member of the National Independent Soccer Association, kicked off its inaugural season in March and currently play in Lazer Stadium at Onondaga Community College. Through six games, the Pulse are 2-3-1, most recently tying 2-2 with Michigan Stars FC in Detroit.

Peter Fuller, who previously coached Chattanooga FC for two years, accepted the Pulse head coaching position in early February. However, the team didn’t fully train together until March 19, one week before it played Flower City Union on March 26.

“We’ve had some bumps in the road,” Fuller said. “It hasn’t been easy.”

Despite being made up of unfamiliar teammates, the team’s chemistry has looked much different than what might have been expected. Many of the Pulse’s players have either played for or against Fuller before coming to Syracuse. Defender Shaun Russell, who played under Fuller for two years at Chattanooga FC, chose to join him in Syracuse.

“We had a really good relationship on and off the field,” Russell said. “I knew once we were both out of our jobs at the end of the year, I knew I could pick up the phone and give him a call.” 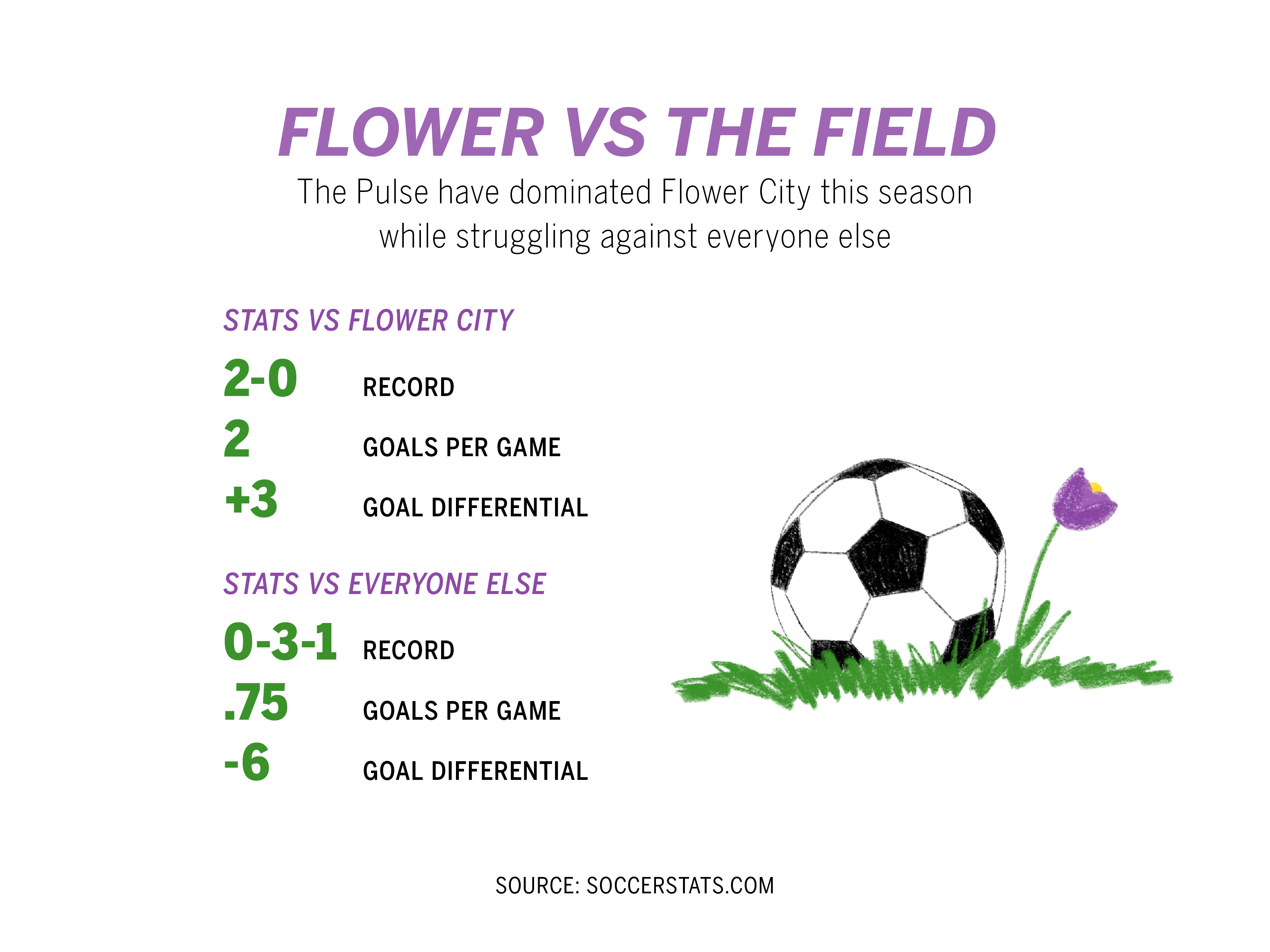 Though the Pulse won its first-ever game with only one week of training, the bumps in the road that Fuller mentioned eventually came. After the 1-0 win, the Pulse dropped three in a row, with losses to the Maryland Bobcats FC, Michigan Stars FC and California Strikers United FC. The Pulse lost all three by a combined score of 7-1. Despite the early slump, midfielder Michael Kafari says the consistency will come.

“We came out playing well, but with such a short preseason it was hard to get consistency,” Kafari said. “Now that we are in a groove, we are hopefully going to get results and start winning games.”

The Pulse bounced back by defeating Flower City Union for the second time this season, winning 3-1. Jackson and Alexander Satrustegui each added their second goals of the season, while Stephen MacDonald netted his first of the year.

The Pulse are only six games into the season, but the expectations remain high for the club.

Following Saturday’s 2-2 draw to Michigan Stars FC, the Pulse have a couple weeks of rest before returning home to play Valley United FC on June 1. This will be one of four home games in the month of June. The Pulse’s only June away game is on June 11th when the team travels to Tennessee to take on Fuller’s old club, Chattanooga FC.

“I think as time goes on and as we get more games under our belt, the league and the outsiders looking in will get to see that this is a really talented group,” Nuel said.