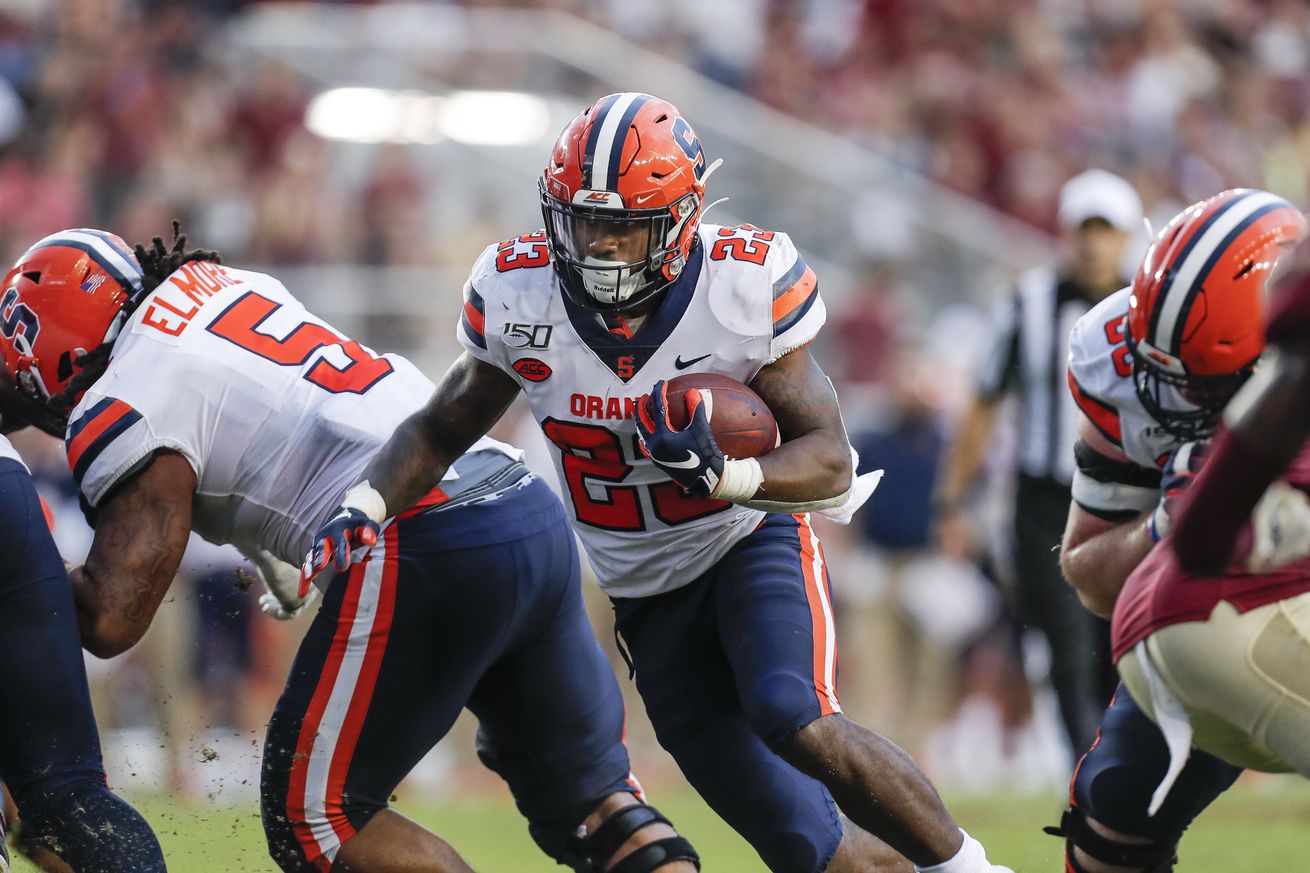 We’ve got access to PFF advanced stats, and there’s a lot of information to digest

Pro Football Focus has been a great resource for a deeper analysis of NFL stats and players. And in the last year or two, PFF started posting college player stats and grades on Twitter as well.

Now, they’ve released a premium subscription site for college football player stats and grades. And with a membership, we’re able to dive into that a bit further here — both in advance of the season and during it as well, provided there are games to break down.

At TNIAAM, we’re all pretty excited to take a deep dive into the stats provided by PFF for the (admittedly, disappointing) 2019 season. The advanced stats allow us to take a closer look at where the strengthens and weaknesses were in SU’s gameplan. With a plethora of data points available, let’s take it slow and start with the Orange running game. What are some of the interesting talking points based on the PFF stats?

Moe Neal was far and away the most effective running back last season. He earned a 76.1 rushing grade which was just under eight points higher than the next best grade (which somehow was Clayton Welch). That’s not really surprising, given Neal’s team lead in yards on designed runs (855) and rushing touchdowns (seven).

To further illustrate how key Neal was to the rushing attack last season, consider the numbers of Abdul Adams and Jarveon Howard. The duo combined for 163 rushing attempts in 2019 compared to the 169 attempts of Neal. Adams and Howard combined for 670 yards — 185 fewer yards on only six fewer attempts than Neal. Whoever takes the RB1 role for SU in 2020 has a lot of production to make up for. Speaking of which…

Who becomes the primary running back?

Most people coming into 2020 that Adams should be the number one running back for SU, especially after he was listed in that position on the spring depth chart. However, the numbers might make some think a little bit harder about who should get the bulk of the carries.

The rushing grades between Adams and Howard are incredibly close: a 66.9 for Adams and a 65.8 for Howard. However, Howard has statistical advantages in some other categories. Both players rushed for 335 yards, but Howard achieved that on 11 less rushes. Howard has also gained seven more first downs than Adams (21 to 14). They are virtually equal in other categories as well, with three rushing touchdowns each and averaging just under three rushing yards after contact.

Of course with all stats, the intangibles are not listed, so there may be additional impacts that Adams makes on and off the field that can’t be put into numbers. But Howard has certainly proven that he can be more than just a red zone specialist. However, Adams and Howard aren’t necessarily the only running backs that Dino Babers has at his disposal…

Four games is a small sample size. That being said, so many fans were impressed with what Jordan produced on the field in his true freshman year. He grabbed 105 rushing yards on 15 rushes and a touchdown, earning a 68.2 rushing grade. If we look at some of the stats that I mentioned to compare Adams and Howard, Jordan earned five first downs and averaged 3.73 yards after contact.

Given what we’ve seen in his return game and in his 81-yard catch and run against Louisville, it’d probably be better if Jordan is given open air to run, which is why we’ve advocated for him to become an H-back, a la Ervin Philips. However, his limited game action also proved that he can be just as effective in the dirty run game that takes place in the trenches. Although you could avoid having Jordan running into 300-pound defensive linemen with a simple tactic…

Rushing down the middle vs. rushing around the outside

I don’t know if other Syracuse fans share the same sentiment that I hold, but I’m really tired of a large majority of ‘Cuse’s rushes going up the middle. That being said, the PFF stats not only suggest that there is more variety in SU’s rushing directions, rushes up the middle might be Syracuse’s best form of rushing attack. 25% of Syracuse’s runs go up the middle and they account for 28% of the Orange rushing yards in 2019.

To my surprise, over 38% of SU’s rushes went around the tackles and they only accounted for 35% of Syracuse’s rushing yards. This is where someone with Jordan’s skillset can come in handy, with the majority of his high-yardage rushes going around the outside. To probably no one’s surprise, Howard’s runs are usually up the middle while Adams was a little more versatile in his rushing direction. I still think there are a plethora of opportunities to add more variety in the direction of Syracuse’s rushing attack, and one way to do that may be…

Why not try a jet sweep or reverse?

Taj Harris attempted two rushes in 2019. One was a reserve and another went around the outside on the right. Both went for at least 10 yards. There are some athletes available in the wide receiver corps, but Syracuse only attempted six jet sweeps or reverses. I know there’s not a lot of motion that is incorporated in Dino’s offense, but there’s talent that can be exploited in the wide receiver position that could help unlock the effectiveness of SU’s running backs. Of course, something that did help with that that Syracuse no longer has is…

In 2018, Dungey ran 121 designed runs, which was the second most on the team behind Neal. Tommy DeVito only ran 24 designed runs. Dungey was the second highest graded rusher in 2018 as well with a 72.7, while DeVito was the lowest graded rusher in 2019 with a 40.9. It can be easy to forget how much of an impact Dungey made with his legs, and that clearly has hampered Syracuse’s rushing attack. Now we all know that DeVito is not a running quarterback, and that’s ok. But that puts more emphasis on the running backs of SU to step up.

There’s a quick look at some of the stats that PFF has provided for Syracuse’s rushing offense. We’ve got more stats to comb through, and I’ll be back later this week with a look at the Orange passing offense and the Orange defense. Let us know what other areas of the Syracuse Orange we should look at in greater detail using PFF stats. Also sound off in the comments below what you think of the PFF rushing stats for Syracuse.