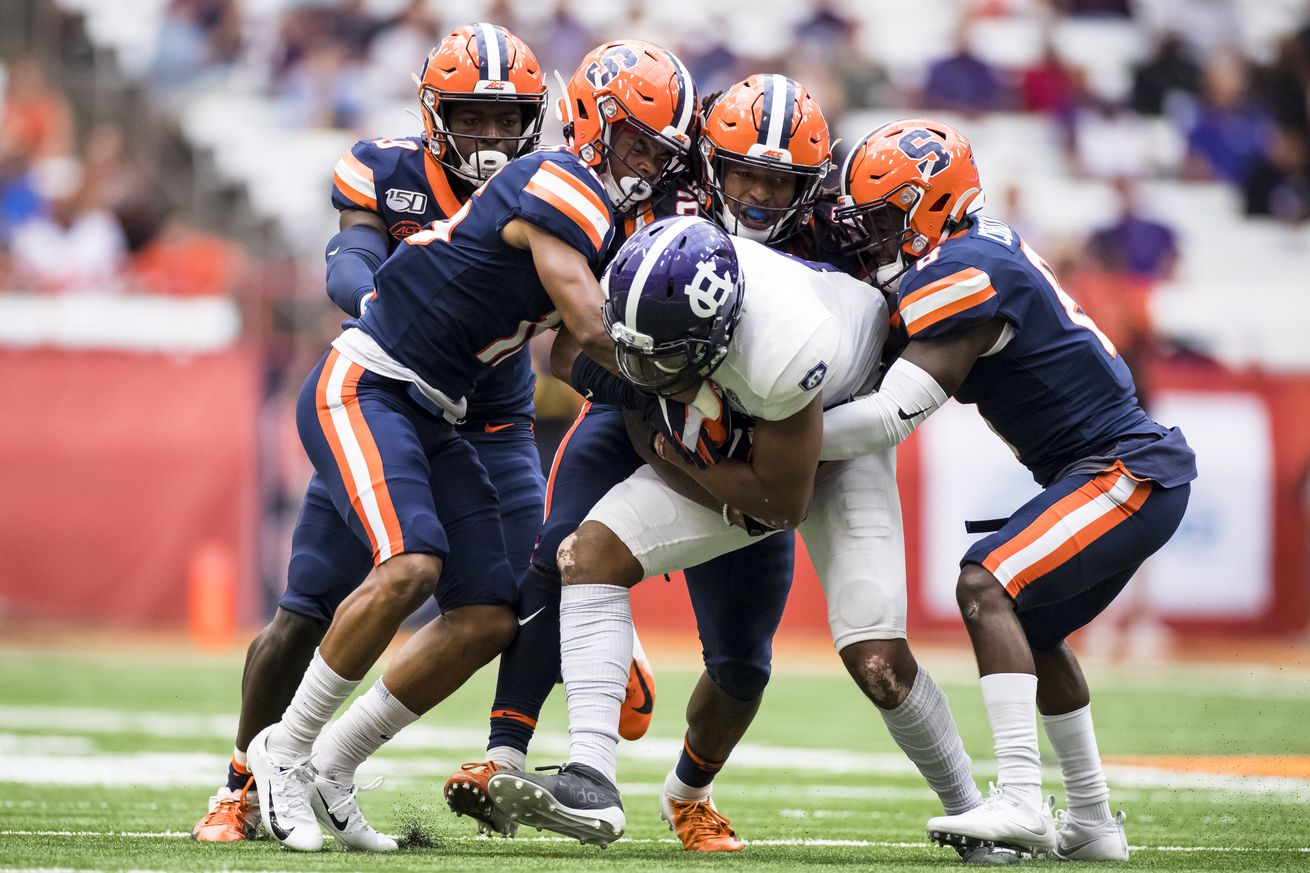 The SU defense took a step backwards last year. Let’s see if PFF can tell us why.

As we’ve mentioned, we at TNIAAM love the premium subscription stats that Pro Football Focus has recently released for college football. We’ve used the opportunity to take a closer look at some of the advanced statistics that were not previously available to college football. On Monday, I used PFF’s stats to examine the 2019 SU rushing attack. Today, I quickly detour to the defense as we take a look at a unit that many believed should have been better in 2019.

To break it down further, eight players earned an 85.0 grade in at least one of the defensive subcategories – rushing defense, pass rushing, tackling, and coverage. In 2019, only two players got a grade over 80.0 in one of those subcategories – Robinson in pass rushing (83.3) and Eric Coley in tackling (80.1).

That in part just goes to show the step downwards the SU defense took in 2019. Can we pinpoint where the defense suffered in 2019? Well let’s start with…

Most people focused on the vastly decreased numbers from Robinson and Kendall Coleman. However, when you look at Syracuse pressuring the quarterback, the numbers between 2018 and 2019 aren’t that much different. Although SU recorded five fewer sacks in 2019, the Orange defense racked up six more quarterback hits and 23 more quarterback hurries.

When you look at who filled the stat sheet, the numbers show that the wealth was spread out much more in 2019 than in 2018. The lost sack numbers from Robinson and Coleman were picked up by Brandon Berry and Josh Black. SU also gained help from Lakiem Williams and Jonathan, who both had a glut of QB hits and hurries in 2019.

So while Robinson and Coleman didn’t cause the havoc they did in 2018, the Orange defense as a whole still did pretty well in pressuring the quarterback. However an area that Syracuse didn’t do too well in is…

Someone make a tackle… please

To further illustrate the dominance of the 2018 Syracuse defense, that unit missed 97 tackles over the course of the season, including the Camping World Bowl game against West Virginia. While that might sound a lot, the 2019 Syracuse defense missed 139 tackles. Surprisingly, that was in the bottom half of the ACC in terms of missed tackles for last season.

Perhaps a little more worrying for the 2019 SU defense is the amount of “stops” the unit made. PFF defines a “stop” as a tackle that constitutes a “failure” for the offense. If you want a further explanation of stops, take a look at this PFF article.

In 2018, the Syracuse defense totaled 338 stops. In 2019, SU managed only 314 stops. While the difference isn’t that much, consider the fact that the 2019 Syracuse defense ranked dead last in stops within the ACC.

So to recap, Syracuse missed a lot more tackles in 2019 and made fewer key tackles as well that would benefit the defense. Certainly not what you want to see from a defense that impacted the field a lot in the previous season. That brings us to…

Who plays the “rover” role?

For those who don’t know, the “rover” role is the fifth defensive back that is really the signature of the 3-3-5 defense. It is essentially a more important nickelback, and Trill Williams has been impressive as SU’s nickelback. While his PFF grades, like virtually every SU defensive player, decreased in 2019, you cannot ignore the presence he holds on the field.

Just look at his 2018 season, where he was the only player to earn above an 85.0 grade in two of the defensive subcategories. In fact, he earned the highest grade in a defensive subcategory among all Syracuse players in 2018 with a 90.5 in tackling. The other standout grade was an 86.1 in run defense.

Why do I bring this up? When you take a look at the spring depth chart, Williams is listed as the primary cornerback. However, in recent press conferences, both Dino Babers and Tommy DeVito have mentioned that Williams currently doesn’t have a defined position and floats around the field. That might suggest that he could take many snaps during a game in that rover position where he’s made his mark for Syracuse over the past few seasons.

Even if Williams goes out to corner for a couple of plays, Syracuse still has an option in Eric Coley to fill in the rover role, and in fact he’s the one that was listed in that position on the spring depth chart. The tricky part of the position is that because of its uniqueness, it requires a player to be versatile, as Andre Cisco said in a recent press conference. SU needs a player that can drop back in coverage during some plays while blitz during other plays.

Coley fits those requirements with grades that were at least 65 or higher in all four defensive subcategories. While a 65 isn’t necessarily a high benchmark for a grade, it shows that Coley has the versatility that SU is looking for in a defensive back that can take the pressure of playing the important rover role.

Unfortunately for me, after looking at the PFF stats, someone that I would have been interested to see play the rover is Allen Stritzinger. While he probably doesn’t have the pass rushing grades to warrant a go at the position, he did have good grades in rush defense (79.2), tackling (74.8) and coverage (68.3). I think with a little bit of development, he could’ve been a great secondary option at rover. However, Stritzinger entered the transfer portal earlier this year.

While the rover role for me will be one of the most interesting positions to watch throughout the season, fans and opposing teams will most likely have their eyes on one player…

Let’s get this out of the way first — yes Cisco did have an injury that limited his explosiveness and influence on the field. The obvious number first – he recorded two less interceptions in 2019 than in 2018. He still is the active leader in the FBS in interceptions, but a closer look at the PFF stats goes to illustrate how much of a dip in form Cisco took from 2018 to 2019.

Also of note is that while receivers only caught 17 balls against Cisco in 2018, they grabbed 26 receptions in 2019. That’s a difference of 22.2% in reception percentage. Cisco also recorded three fewer pass break-ups in 2019 than in 2018. However, perhaps the biggest difference is the touchdowns Cisco allowed. He allowed two touchdowns in 2018, but gave up six touchdowns in 2019.

Cisco has the talent to be a first-round NFL Draft pick, that’s without question. However, if Cisco wants to earn that distinction, he’s got to perform closer to his 2018 numbers than his injury-hampered 2019 season.

That’s an extensive look at the defensive stats from PFF. What surprised you the most? What else would you like to know? Sound off in the comments below.