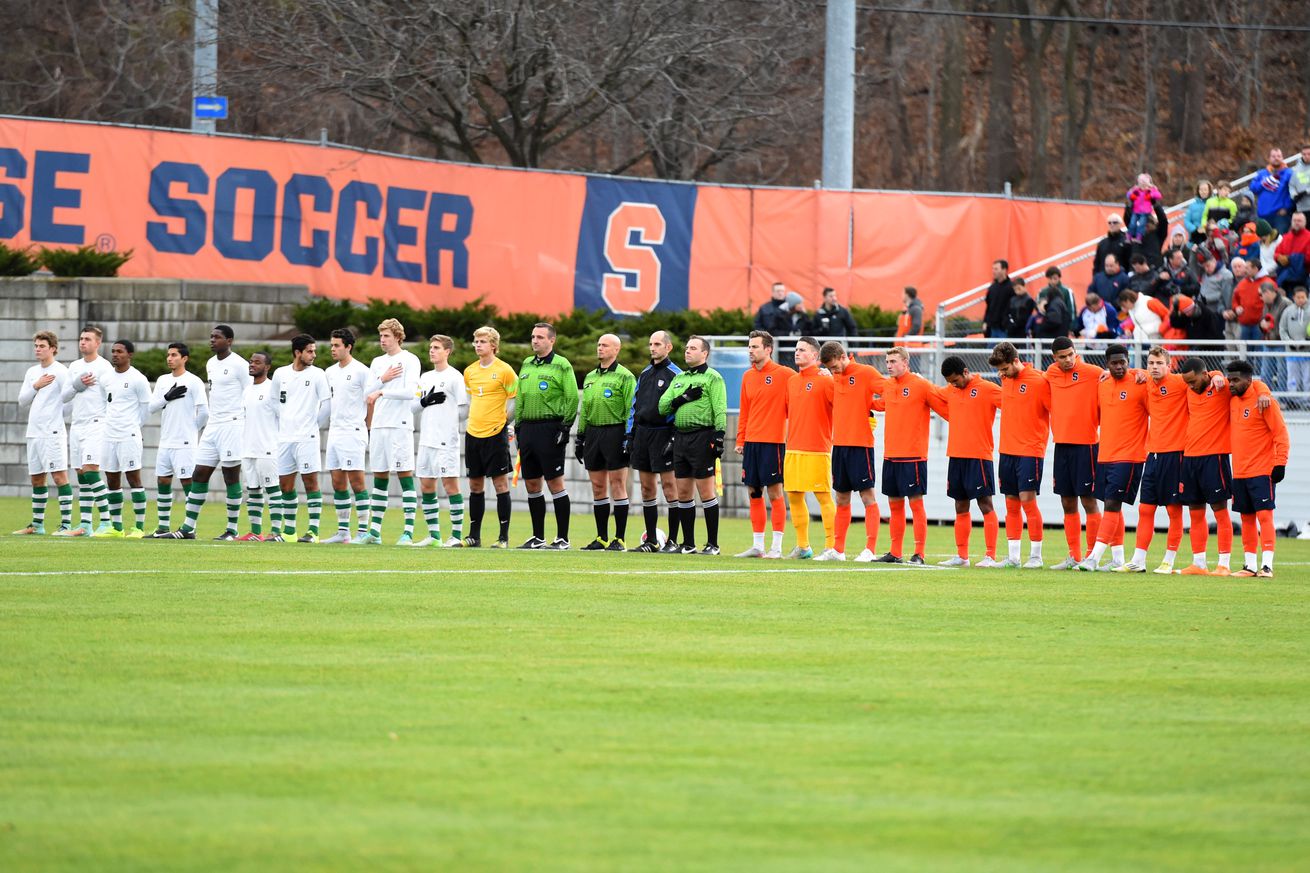 The Orange open the season tonight against Pitt.

Previously we took a look at the schedule and roster changes for the Syracuse Orange men’s soccer team. Looking forward, let’s take a look at how some of those pieces fit the Syracuse puzzle.

In recent history, Coach Ian McIntyre has utilized a preferred 3-5-2 / 3-4-3 with the personnel that he has had. The system utilizes three centerbacks, with two wingbacks that tend to err more offensive minded, but shuttle the flanks well, hoofing in crosses for the runner near the box. Both Simon Triantafillou and Noah Singelmann have played in that role over the years for Coach Mac. The addition of Pittsburgh transfer Tim Ekpone adds a third option at centerback with the departure of Nyal Higgins, so that’s a wash.

Holding midfielder Anferny Sinclair also returns, locking that spot down. A lot of the questions come in the attacking midfield and attack. Julio Fulcar returns ahead of Sinclair in the box to box role.

In front of that is where some of the questions arise. Luther Archimede will likely be leading the line, as he did last year and Hilli Goldhar needs to be on the pitch in some sort of facilitating role. He tends to operate more from a wide position, playing on the left, which seemingly makes this look more of a 3-4-3 with him in a wide forward role.

The last attacking midfield / forward role, currently shows Matt McDonnell, the Boston University transfer, who was All-Patriot League last year slotting into the rotation as the forward playing wide right. Some other likely options are Manuel Busquets, the Dusquene transfer or Roque Viegas, the Monroe Community College transfer, however, since I’ve never seen any of the new guys play, this is an educated guess based on what the system calls for.

With a schedule as tough as what is outlined for the Orange, with only two home matches, and the rest on the road, I wouldn’t bank on this being an absolutely stellar season in wins and losses. It could, however, be a great building year and Syracuse could get some great minutes for some folks that can have an impact on the program moving forward, while also sniping a few wins. With none of the eligibility limits of a normal year, if any seniors would want to return as grad-students, they have the option. Also, how the NCAA College Cup will play out in the spring remains to be seen, with limited out of conference games and an eight game schedule, the ACC is a bit hamstrung on how they compare to any other conference until they see how the spring runs out.

The Orange open their season tonight, October 6, at home against a good Pittsburgh Panthers squad. While traditionally not a power, Pitt is currently ranked second in the country. This is partly because of the fact that there are only two conferences (ACC and Sun Belt), but they did take out an always solid Notre Dame squad to open the season and there’s plenty of talent to go around on the roster. If you would like to get a good look at your Orange, the match kicks off at 7pm eastern on ACC Network.