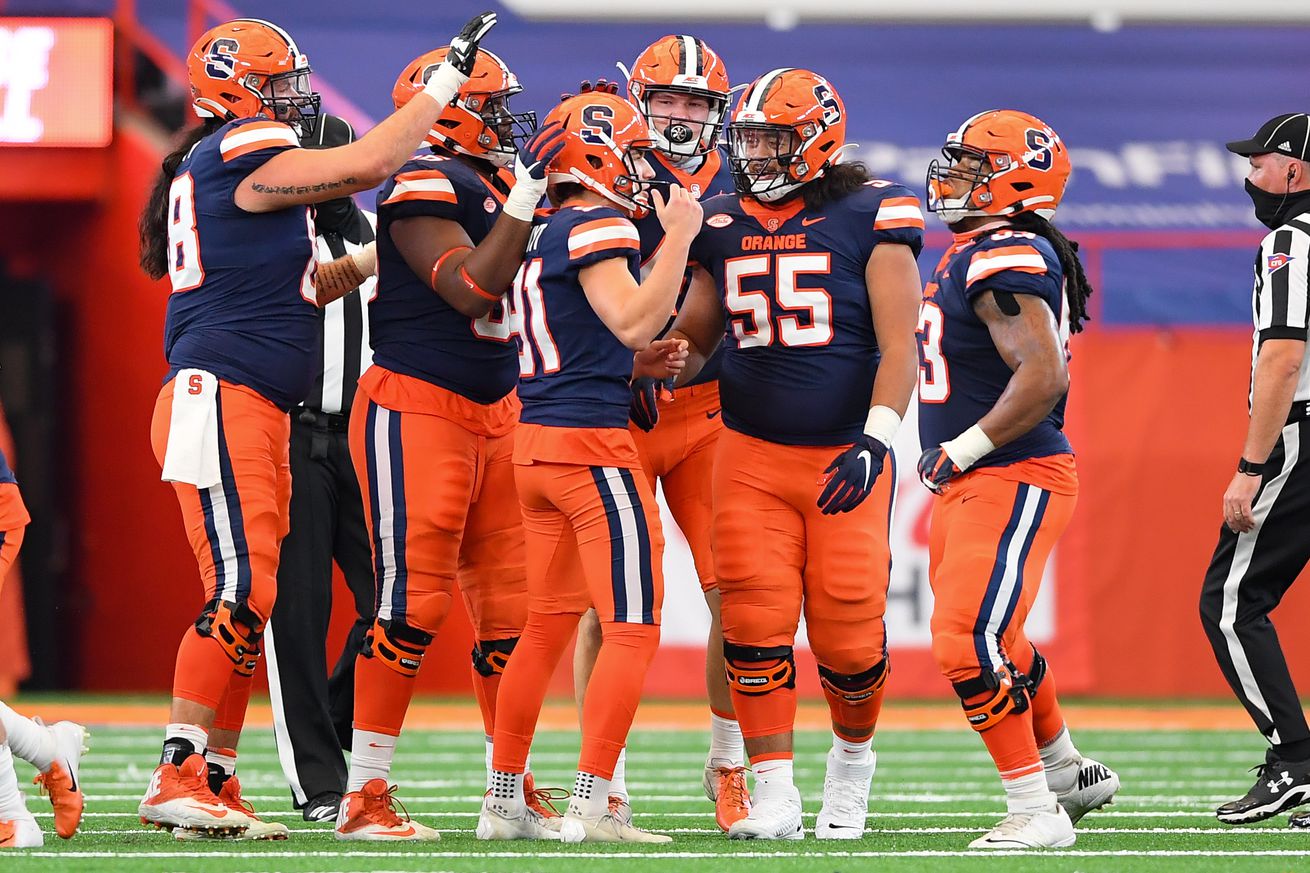 This is part of a weekly series in which I chart the line and rewatch the game with a focus on the big men on the offense for the Syracuse Orange. All of my game charts can be found here.

It’s amazing the difference that a week can make for a unit. To improve from 171 yards of total offense, last week against Pittsburgh, to 357 yards of production, more than doubling the output, it was a welcome change. While we can’t attribute all of that to the offensive line, Tommy DeVito stayed upright much more on the day and the run game opened up for 163 yards, including 112 of those from freshman Sean Tucker.

It seems a combination of scheme, personnel, decision making, and talent level, that led to the increased production from the trenches. This week, because of the telecast, I was unable to chart the second drive outside of Sean Tucker’s touchdown run from the replay, so that information is missing from the data.

Scheme wise, the Orange were in a set with their tight ends on the line of scrimmage or in a wingback position on over half of their open field packages. They shifted to open ends and just a fullback on another eight plays. That left only fifteen plays total that the Orange were in a full spread with four or five receivers lined up. The presence of the extra bodies, definitely provided extra blocking, especially in the run game, but also provided valuable outlets in the pass game. Right off the bat, Syracuse hit their tight ends on some quick leak pass routes. Having to keep linebackers honest on this, and establishing that the tight ends are a threat early forces them to read more instead of being able to cheat the run and not honor the delay routes. This helps to keep the line less overloaded and in general helped keep things in check until later in the contest when Georgia Tech started bringing more pressure while trying to get back in the game.

The addition of Tucker changed the look of the run game. While other running backs on the roster can run downhill, Tucker seems to be more of the mold of a one-cut runner, hitting the hole, choosing a read and selling out to it. He showed he was capable of bouncing things as well, but the decisiveness with which he runs will keep the line from having to peel open huge holes for him to get through and he’ll make some yardage on his own.

Decision wise, DeVito seemed to get the ball out much quicker and be more decisive in his throws. While there were a few times he was under pressure for coverage reasons or missed an open man that he didn’t see, in general he played a tighter game. This keeps the line from having to hold pass protections longer and allowed for a generally higher rated game than the past two weeks, and more importantly one sack.

I also don’t want to harp on it, but Georgia Tech’s defensive front, while not bad by any stretch, wasn’t as good as the group that the Orange saw the week prior. Antonneus Clayton, the five star transfer defensive end that was declared eligible prior to the game, still had a decent afternoon pressuring DeVito, but overall, the group was handled much better than Pittsburgh. Only allowing one sack after leaking like a sieve earlier in the year is a big feat against a Power 5 defense. It may be a function of seeing one of the best units they will all year, until Clemson, early in the season, without the name recognition that a Clemson has.

Individually, across the line, the looks improved, but a few things stood out. Chris Elmore is still learning how to handle twisting tackles or cross-stunts, with both Airon Servais and Carlos Vettorello. It’s something you saw the right side of the Tech defense dial up more, later in the game, and to a bit of effect. It also seems that the left side will need to work on double teams and who is coming off blocks. At various times on run plays, the two were running around each other more than working with each other to pass off defenders and seal the second level. Especially against the run, Servais and Elmore didn’t have a great day.

On the other side, Darius Tisdale, while he had a decent game between the whistles, also got called for at least three penalties, including a drive killing personal foul after the play was over. While his work was good, two holds and that personal foul are a bit worrying, though nothing that can’t be shaken off with a bye week. Outside of the sack, where Matthew Bergeron got his hands wiped again, which is becoming a recurring theme, he looked solid through the game.

Overall, the group still needs to work on picking up blitz assignments and working as a unit on the fly, as well as getting more to that second level in the run game, but you could probably say that about any offensive line in the country. While there are some things that need to be worked on, it was good to see the line get back into a bit of a rhythm. They can only be helped by the emergence of the run game and hopefully the bye week gives them some time to heal up.