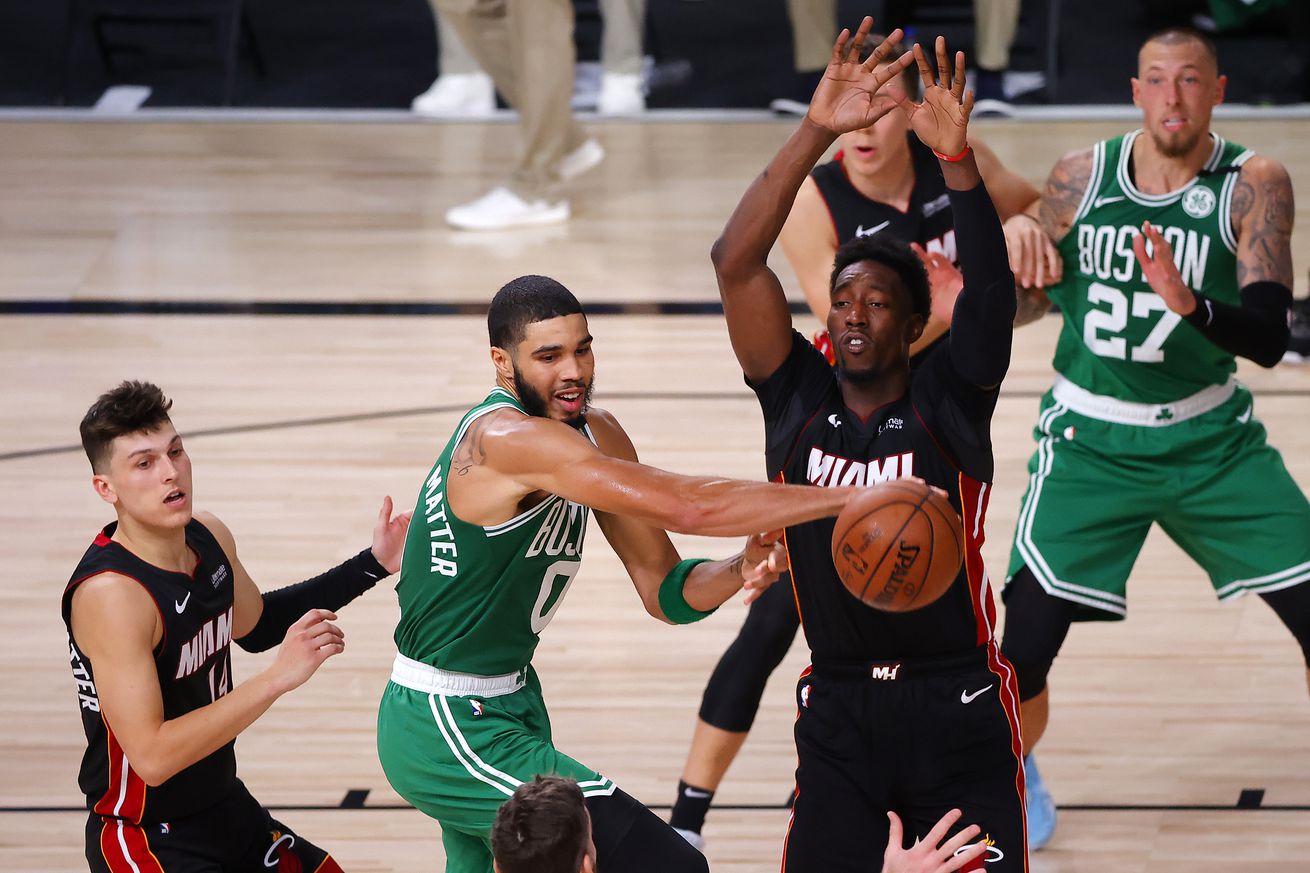 Listen up Syracuse Orange fans. Forget what you think you know about the NBA and how it has nothing to do with college basketball. If you spent anytime watching the Boston Celtics and Miami Heat you certainly saw a lot of familiar patterns on display.

Even if you haven’t been watching you might have heard that Miami ran a lot of zone defense at the Celtics and it’s likely they will employ the zone as they start the NBA Finals against the Los Angeles Lakers. A NBA team playing zone isn’t that unusual but if you take a closer look at how Miami is running the zone you might be intrigued.

All of us “experts” have answers for attacking the @MiamiHEAT zone. But there are not many zones in the world that have Jimmy Butler & Iggy at the top of it.

Instead of playing their guards up top, Heat HC Erik Spoelstra has been using taller more athletic players up top. Jimmy Butler, Jae Crowder, and Andre Iguodala have manned the top of the zone while Goran Dragic, Duncan Robinson and Tyler Herro have been playing the wings. It certainly helps when you have a rim protector like Bam Adebayo in the middle but Miami’s alignment prevented the Celtics perimeter players from isolating weaker defenders at the top of the key and it instead required Boston to spend more time searching for good shots.

We watched last season as Syracuse’s opponents were often able to get the ball to the foul line which forces the zone to collapse opening up opportunities for the offense. Despite certain individuals saying it was Bourama Sidibe’s fault that teams had an easy time scoring on the Orange it was an overall struggle that had Syracuse on the outside looking in when the season ended. Does this mean Jim Boeheim should swap his players like the Heat did? He could certainly do that but he’d probably be pretty disappointed in the rebounding if you had Buddy Boeheim and Joe Girard down low. However you could see games where Buddy or Joe moves to one wing while a better athlete like Allen Griffin or Kadary Richmond rotates up top.

The advantage here is that a longer, quicker player at the top can be more disruptive and since most college teams don’t utilize the corner 3 like the NBA you could play the guard on the strong side of the offense where their rebounding wouldn’t be exposed. In order to make this work the other two interior Orange players would need to be stronger rebounders and we’ll have to see if the 20-21 roster has improved in that area. Again this isn’t a full-time approach but a new wrinkle to deploy against certain opponents or to stop a team which has found success breaking down the defense.

Another wrinkle that Syracuse could pull from the Heat was the way they’ve attacked the opposing defense. Duncan Robinson’s threat from 3 has teams chasing him all over the court. Miami runs Robinson off multiple screens in a way that gets defenses switching until the Heat have isolated the opponent’s weakest defender on one of their scorers. With shooters all over the floor, Miami’s isolation has left their offensive player with plenty of room to attack.

This is an area where Syracuse found some success last year. It’s a similar strategy they employed at Virginia Tech when Buddy went off with Hunter Cahoot unable to stop him. We’ve talked before about using Marek Dolezaj to initiate the Orange offense from the top of the key. The Heat have used Adebayo in this role which pulls an opposing center away from the rim while allowing shooters to screen for each other off the ball. Last year Syracuse’s offense got bottled up when teams decided to trap the pick and roll. Since the Orange aren’t looking for Bourama Sidibe on the roll, it allows opponents to trap the offensive threat.

When you’re running players off multiple screens from the wings it’s harder to help so watch Robinson come off for these hand-offs and wing screens you can imagine the space that Boeheim and Girard could find in an off-ball role. With Dolezaj and Griffin likely starting they could keep the guards from being in situations where they are relying on their dribble to create shots. The last two seasons the Syracuse offense has had spells where the movement stopped and players were stationary on the perimeter watching a teammate attempt to create against a set defense.

Win or lose in the Finals, the Heat have overachieved in this post-season thanks to the adjustments they have made each round. The unselfish offense and unique defense they’ve exhibited could be a model for a Syracuse team which will enter the 2020-21 season without high expectations. It’s going to take a strong team effort for the Orange to return to the NCAA Tournament next March and borrowing from the Heat’s approach could be an