Syracuse’s linebacker core needed a change in persona if it wanted to become a threat after giving up the fifth-most rushing yards nationally in 2020. During the first spring practices of the season, the group landed on a name for this shift — they created a “mob mentality.”

“It was the mentality that we had all summer and all winter because of the season we had last year,” linebacker Geoff Cantin-Arku said. “We knew that we had to get our things together.”

This mindset made its way to the entire 3-3-5 defense, linebacker Marlowe Wax said. But like “The Sopranos,” there are only a few players at the forefront for the Orange. Mikel Jones and his eight armbands make him the unanimous Tony Soprano of the bunch, referred to by head coach Dino Babers as the defense’s “quarterback.” Cantin-Arku, Wax and Stefon Thompson make up Jones’ inner circle, following him on each snap or making plays on their own. After struggling last season, the four players have split up reps this year, combining for 142 tackles and 8.5 sacks through six games.

Defensive coordinator Tony White brought the 3-3-5 defense to Syracuse in 2020 after serving as the cornerbacks coach and defensive passing game coordinator at Arizona State for two years. In the 3-5-5 scheme, three linebackers are on the field, and they’re not required to drop into pass coverage as much as before with the presence of five defensive backs.

With the exclusion of Wax, the rest of the linebackers had experience with this setup in high school as the system has grown in popularity with the emergence of pass-heavy offenses around the country. Thompson said this introduction to the scheme was key to learning some of the fundamentals, like which gaps defensive linemen filled and where linebackers were supposed to be.

“In high school, I just ran the same defense but with different calls,” Thompson said. “When we got here it was really the fundamentals, like knowing who’s the key.”

Despite prior experience, the set didn’t get off to a good start in 2020. Syracuse’s defense allowed 209.1 yards per game and ranked 104th in the country. The linebacker core in general struggled with stopping the run, giving up a total of 2,300 rushing yards.

Defensive linemen Josh Black said the struggles were because of the lack of offseason preparation due to COVID-19,which canceled spring practices and shifted meetings to a virtual setting. It took the team three-quarters of the season to finally get comfortable in the setup, he said, but the Orange still allowed an average of 37 points in their final three games due to miscommunications between the defensive line and the linebackers.

“Last year we were not on the same page with the defensive linemen,” Cantin-Arku said. 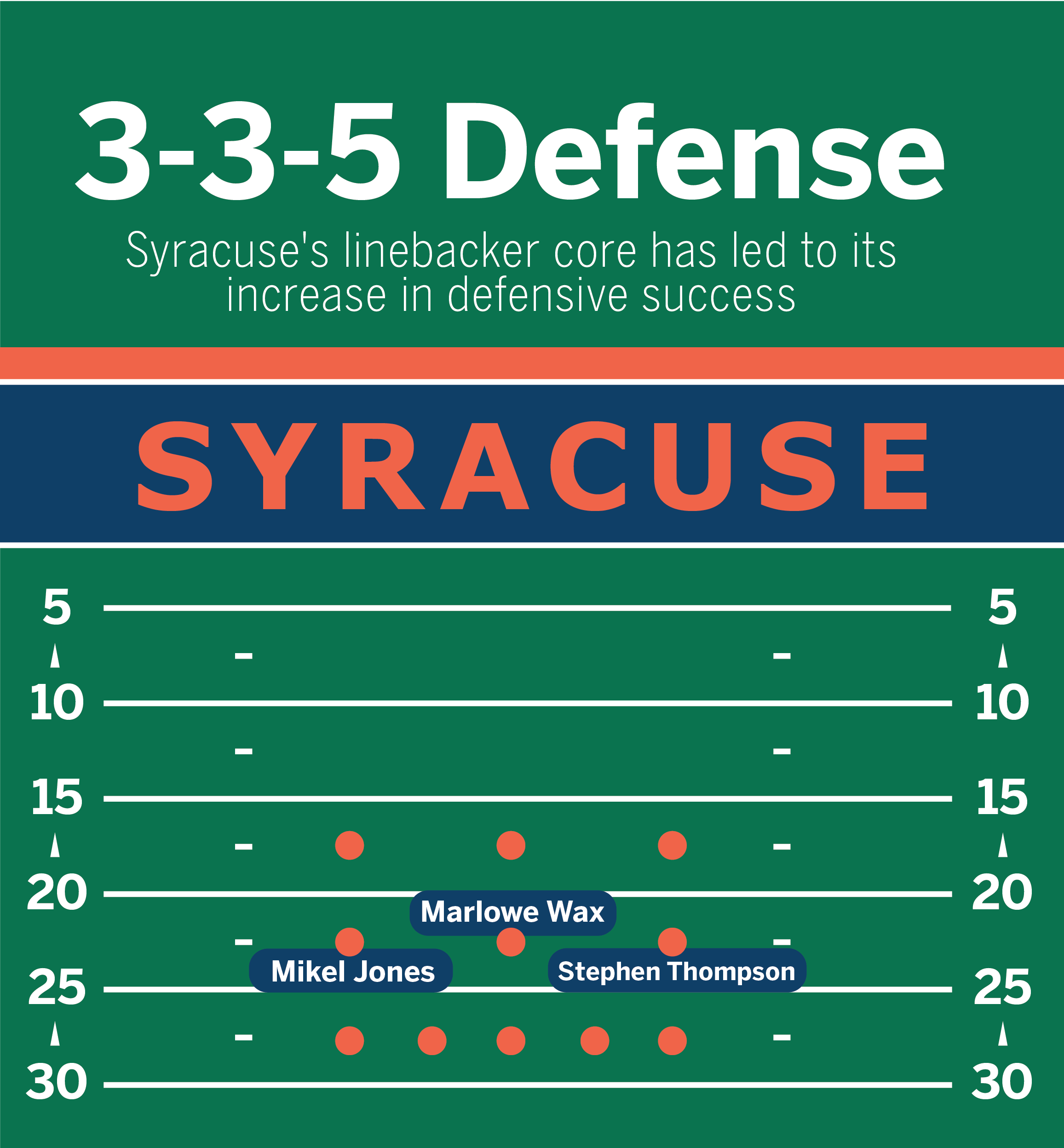 Since the team was still learning the intricacies of the system last year, Syracuse was unable to complicate or add different plays, Babers said. The Orange’s linebackers weren’t coming to the line and working with the defensive line and didn’t have time to build that understanding with each other, Cantin-Arku said.

With spring practices resuming this season, Wax said the linebacker core was “all in the books” during meetings. And Wax, who has been on par with Jones this year, was working “overtime” to make up for the lack of knowledge he had due to having no high school experience in the 3-3-5.

“He’s a real dog,” Jones said about Wax. “He knows exactly what he needs to do to get better, and he did it all offseason.”

With more time to work on plays with the defensive line, Syracuse added stunts or “twists” to its defensive playbook. In a “twist” play, if one of the linebackers is up at the line of scrimmage, they can go inside into a gap, while the defensive linemen they’re next to hits the outside gap. This ensures both gaps are still contained, but the lineman covering those gaps switched spots, confusing the offensive line.

Against Rutgers, defensive lineman McKinley Williams got two tackles, including a sack, with the play, switching places with Wax or Jones after snaps. But Syracuse’s next opponent — Liberty — required a different approach, and a better designed plan, to stop one of the best players in the country, quarterback Malik Willis.

Syracuse had to make a change on defense, adding Jones as a sort of “QB spy.” His purpose for the rest of the game was to stop Willis’ dual-threat abilities.

Dropping back on third-and-3 in the second quarter, the pocket completely broke down on Willis. He saw an opening down the left side of the field, unaware of Jones waiting in the middle of the field. As Syracuse’s other linebackers pushed Willis out of the pocket, Jones was there for the cleanup, wrapping up the quarterback’s legs 1 yard short of the first down marker. Willis finished with a season-low 49 rushing yards.

Cantin-Arku said that game was the best performance from the group that season, with Jones at the forefront of the team’s success. Last season, Jones started as the backup to Cantin-Arku, but at the middle of the second level this year, he leads the team in solo, assisted and total tackles.

“(Jones is) making plays so much that it’s easy for us to follow in his steps,” Cantin-Arku said. “He’s such a good player that he makes everybody around them better.”

With roughly a minute left and the game tied at 30-30, Travis took to the field for one final attempt to win the game in regulation. On second-and-5, Travis dropped back to a pass, causing Jones to hustle up to the line of scrimmage. Jones was expecting a deep throw and wanted to put more pressure on the quarterback, but after Jones abandoned his position, Travis took advantage.

Travis scrambled for 33 yards, tiptoeing down the sidelines to move the Seminoles closer to field goal range. Later in the drive, Jones and Wax both went to the line to apply pressure, successfully getting past the offensive line. But as Travis scrambled again, Wax was held, unable to get at the quarterback. No flag was thrown, and the defense was unable to contain Travis.

“All that moving around and disguising, it’s doing that to make sure that we can distract the quarterback, and they don’t know what coverage we’re in,” Wax said. “We still have to contain whoever we’re playing.”

Against Wake Forest, the Orange fixed their issues, containing quarterback Sam Hartman in the pocket and stopping the rushing attack. The Demon Deacons only recorded 96 rushing yards but torched Syracuse’s defensive backs in man-to-man looks, and Hartman finished with 330 passing yards in the 40-37 overtime win.

The linebacker core has come together at certain times this year, but its most complete game was against UAlbany, Cantin-Arku said. At the beginning of the second quarter, the Great Danes were trying to recover from a 24-10 deficit.

On first down, UAlbany quarterback Jeff Undercuffler dropped back to pass, sending Jones and Wax into pass coverage. Thompson stayed at the line of scrimmage, performing the role of a defensive end, and hit Undercuffler’s hand before he could properly release the ball. On second down, Wax joined Thompson at the line, instead on the right end. After the snap, running back Lavarey Banton took the handoff and was met by Wax a few yards in the backfield.

With a third-and-16, Undercuffler took off on a designed quarterback cut to the left side of the field, trying to get a few yards before sending out the punting unit. But Undercuffler only gained 1 yard. The captain of the unit, Jones, drove Undercuffler to the ground with his left shoulder. Jones bear crawled on the Carrier Dome turf celebrating as SU held UAlbany to negative 5 yards on the drive.

“They’re an amazing group, and Mikel’s the leader of those guys,” Babers said. “They’re part of the spokes that make that wheel go over there.”