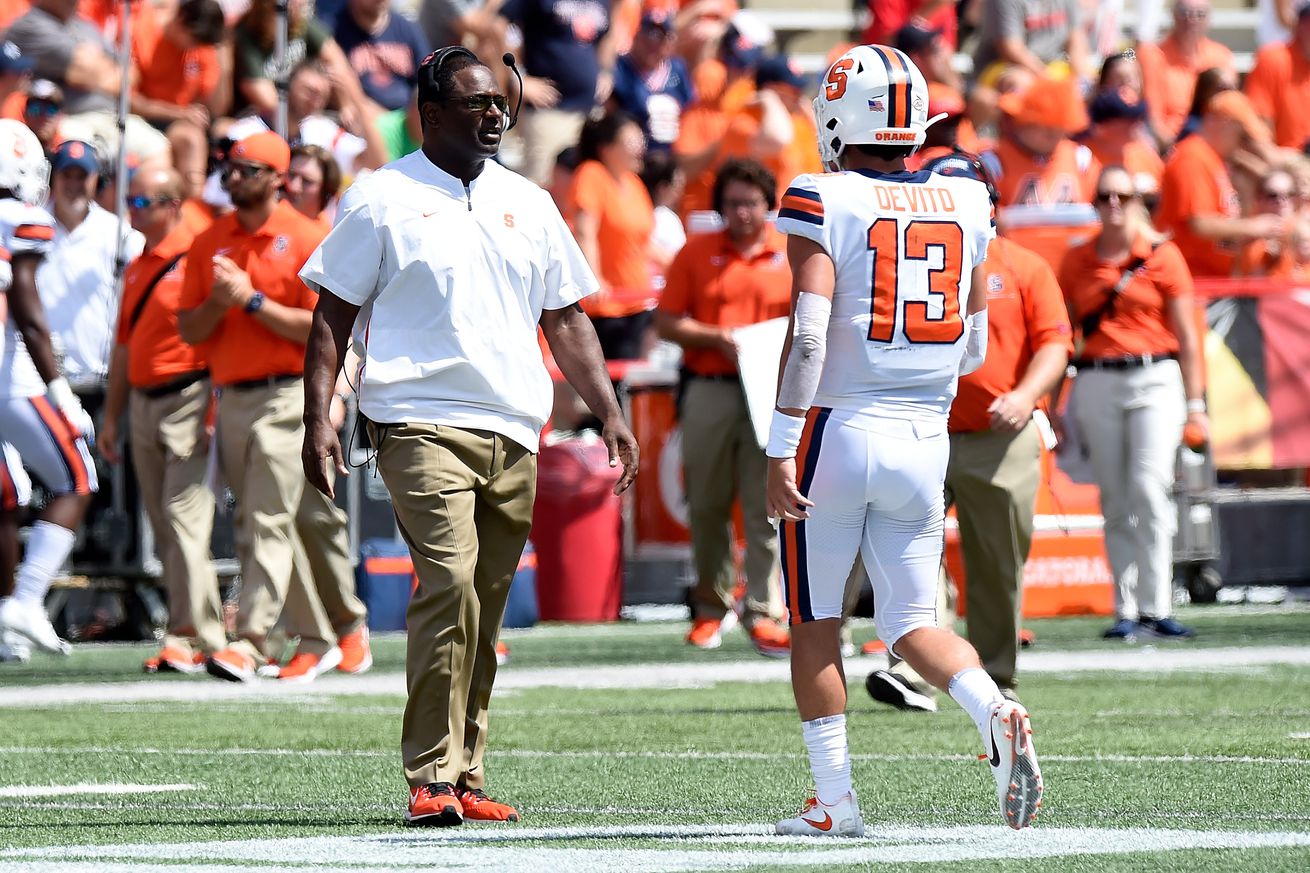 Welp, can’t say anyone envisioned this after the 2018 Camping World Bowl

Following the Syracuse Orange’s second straight loss to a ranked team to start this season, I couldn’t help but feel hopeless about the current predicament.

Just 14 games ago, Syracuse was ranked 15th in the country after winning the Camping World Bowl. The offense was humming, recruiting looked like it was picking up, and we’d seemingly pulled off a coup in hiring Dino Babers when we did. Having Eric Dungey’s “heir apparent” at quarterback — Tommy DeVito — seemingly assured that the good times would continue to roll.

How much we all quickly forgot that this is Syracuse football, and keeping Syracuse football competitive in the sport’s current landscape is challenging. We just thought Dino Babers would be an exception to this rule. He may still be. But through two weeks of the 2020 season, confidence is shaken a bit, even among those of us who are very much in favor of giving Dino as much time as he needs.

When Babers was hired, we figured the one thing that would always be fine was the offense. We’d sat through the defense-first Scott Shafer years, knew they weren’t for us in the long-term, and turned the page to something exciting. The defense had a chance to be problematic at times (and it was at various points), but we’d rather go down in a shootout than a slugfest.

Over the last 14 games, Syracuse has averaged 25.4 points per game. Just 21.6 against Power Five foes.

That dissonance — between expectation and our 2016-18 reality, versus what we’ve seen for a little over a season now — is probably what’s driving fans over the edge most. The play-calling since Dungey graduated has been questionable at best. And with Sterlin Gilbert, who was added this offseason, we’ve even seen a regression from what was on display in 2019.

If you’re searching for reasons (“excuses” as detractors will certainly call them) this is happening, you do have your fair share of options. Last year’s offensive line was a problem, and this year’s is an even bigger one due to injuries. While Babers made the smart move by switching offensive coordinators this offseason, Gilbert didn’t have time to do a whole lot of in-person instruction. Syracuse’s top two running backs opted out, and there was virtually no experience behind them. The Orange’s top receiver from last year, Trishton Jackson, declared early for the draft and that left a major hole in the passing game that depth had yet to be developed to address. SU’s original schedule, once set up for a rebuilding team to squeak into a bowl, was upended on the fly.

The problem unmentioned above is, of course, quarterback play.

Dino’s noted that the QB position is the “straw that stirs the drink” in his offense, and Tommy DeVito’s struggles can’t be ignored when looking at what’s gone wrong. Our first glimpses of DeVito in action were a potential result of Babers’s wavering confidence in Dungey. Not his play-making ability, mind you. But his ability to protect himself and take calculated risks. That risk assessment was at the core of why Babers went with DeVito in some key moments. And addressing those issues to some extent was why Dungey wound up back on the field pretty quickly.

But now, DeVito’s shown himself to be incredibly risk-averse. A broken-down line in front of him has left him shell-shocked, to an extent. He still has a good arm, but he appears hesitant to use it. His decision-making ability, when coupled with poor play-calling, is leading to this offense cratering under literal and figurative pressure.

By his own admittance, Babers has never been to this part of the rebuild before. Before last year, he said he was excited to see this side of it; the part where you build on your success and building something long-term. Things didn’t go as planned in 2019 there. And through two games, the endeavor seems off the rails.

This doesn’t mean it can’t get back on, and that Babers can’t restore faith. He’s created belief without evidence once before, and he’ll need to engineer some more evidence now to show many that the continued belief is warranted.

He should get that opportunity because he’s clearly earned it. That said, a crisis can only last so long before something has to break (or improve).