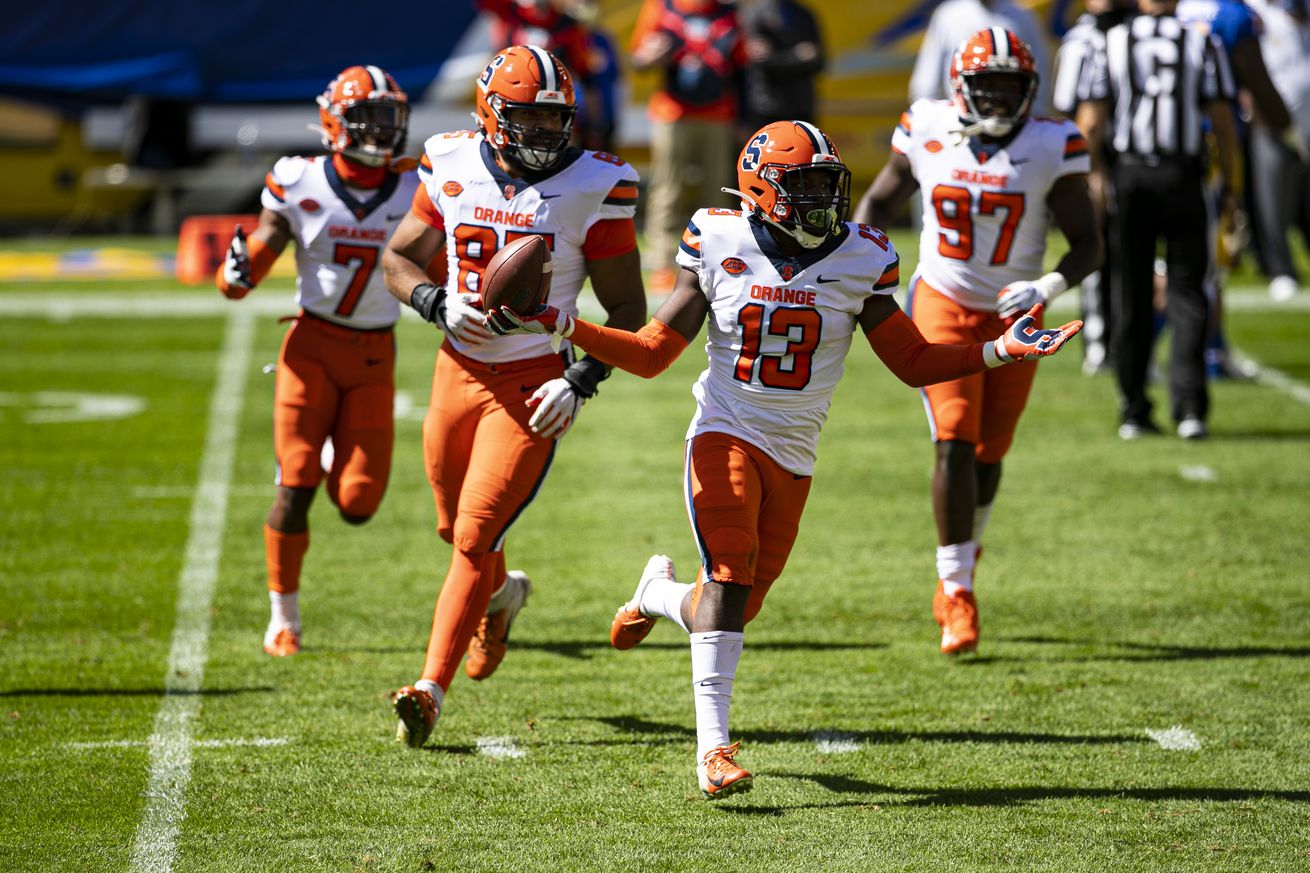 Christian: Containing the run – not just from the running backs

One of the reasons that UNC gained momentum and tired out the Syracuse defense in the fourth quarter of that game was the rushing attack. Pitt doesn’t have the same running prowess that the Tar Heels do, which allowed the Syracuse defense to keep the game much closer in the fourth quarter. And even though Georgia Tech is not the same option running offense from the past few years, they still are a threat on the ground.

Their freshman running back, Jahmyr Gibbs, led the Yellow Jackets in all-purpose yards against UCF last week and was named ACC rookie of the week. Quarterback Jeff Sims is a dual-threat signal caller, which means the Syracuse linebackers will have their hands full once again to nullify the rushing attack. If the Orange can stop the run as effectively as they did against Pitt, they’ll once again give the SU offense all the opportunities they need to get the win.

Syracuse has five takeaways through two games, while Tech is tied for the most giveaways in the nation at seven. Freshman Jeff Sims, while looking like a quality QB, has also thrown four picks. For the Orange’s aggressive, ball-hawking defense, this is a potential smorgasbord… if the offense actually finds a way to convert these turnovers into points.

SU has scored just nine points on those five opportunities, with the other drives ending in a punt and an interception, respectively. We know this offense isn’t suddenly going to improve by leaps and bounds after two straight rough games. But taking advantage of potential short fields handed over by the defense could be the kick start they need.

Kevin- A new wrinkle on offense

Last week I talked about finding the tight ends and they were ignored so I’ll expand my thought beyond one position. Whether this is some plays for Rex Culpepper or a gadget play I want to see Syracuse give us a new look early in the game. Even if a play or two fails it will at least provide something else for the defense to consider.

With two games of film we can expect Georgia Tech will be looking for the four wide-receiver sets and will dare the Orange to attack them downfield. Syracuse can’t be afraid to try and hit something early because even without fans, Tommy DeVito needs one good thing to click to get him going.

Andy: How does Tony White utilize the Rover

As Christian mentions above, stopping the running game from the quarterback position becomes a priority this week, and is something Syracuse has struggled with immensely under all of their previous regimes. Unlike before, the Orange are employing a more flexible defensive system that seems to matchup better against dual threat offenses. The first two weeks, Andre Cisco has been the “Rover” in the secondary, allowing the All-American to go where his instincts take him and create misreads by the opposing quarterback. However, while Cisco can lay down a big hit, it may make more sense for Trill Williams to be in that position. Cisco is better in coverage, and Trill is better in pursuit and tackling that are necessary when spying a mobile quarterback. With the return of Tyrell Richards, there’s even an opportunity to bring either Williams or Cisco on a pure blitz and have Richards be mid rover in shorter passing situations. No matter what, White has several different options at his disposal.

Steve: Can the Orange take advantage of matchups?

It has to be about the lines, right? It’s always about the lines. I’ll let the rest of them talk about the “skilled positions” and I’ll talk about the important ones. Heading into the season, the Georgia Tech offensive line wasn’t supposed to be anything that was special, in fact, they’re pretty pedestrian compared to the rest of the league. With that in mind, they do have some dynamic talent behind them in Sims, Gibbs and the rest. One thing to look at is whether McKenzie Williams, Josh Black and Kingsley Jonathan can occupy the Tech front five, letting the Orange match that backfield talent with the skill of their linebackers.

On the other side of the ball, the defensive front from the Ramblin’ Wreck won’t be as good as what we saw against Pitt, so there’s a chance that Tommy DeVito has a little more time to get the ball off. Watch pressure on the outside, as the GT first unit defensive line actually had a decent pass rush against USF last week.