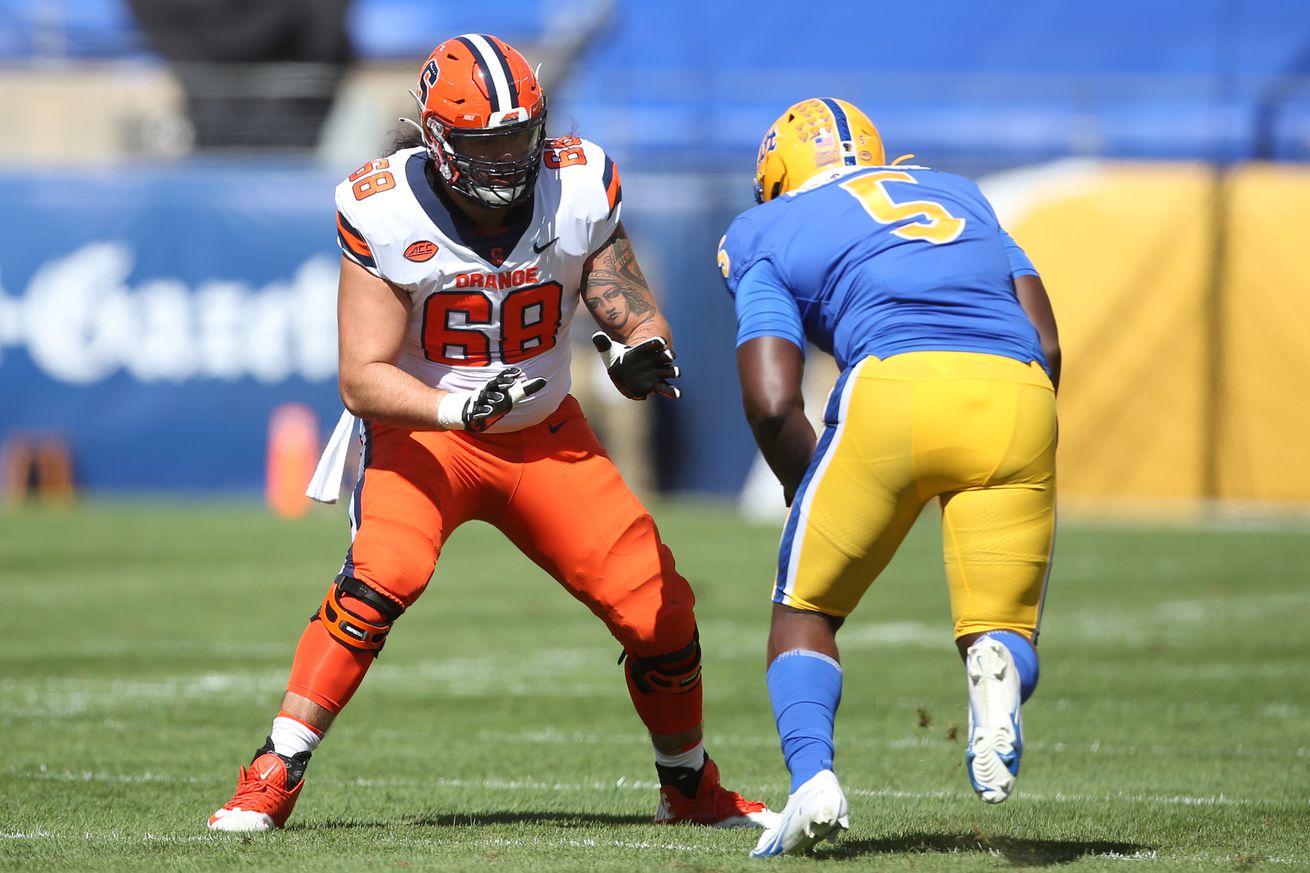 This played out very strangely on the line.

This will be part of a weekly series in which I chart the line and rewatch the game with a focus on the big men on the offense. All of my game charts can be found here.

To put it bluntly this week, the offensive production for the Syracuse Orange, especially from the passing game, was anemic. Only amassing 171 yards of total offense, one of which was a 69-yard touchdown pass, leaves a lot of questions for what’s going wrong. There were 92-yards more punting the football than there were from the offense. I expanded my chart a bit to include the formation type and the play run out of that formation. Not sure if this will help understand things more, but it’s worth a look.

The first drive out of the gates, the Orange looked more poised than the prior week. They were able to give Tommy DeVito some time in the pocket on the plays he needed it, and overall it was a fine set. As Dino Babers mentioned in his press conference, and sounded like coach-speak at the time, but came to fruition on a rewatch, the little things killed the Orange. The fifth play of the drive, a designed QB draw, Jawhar Jordan misses an assignment on his linebacker and he is the only player that makes a play, keeping DeVito from another first down.

One thing of note, is that Jordan is a young back and not used to protection schemes. Over time his reads on blocks coming out of the backfield should improve, including those on stunting linebackers or inside-out pass protection. It’s something that will need more game-speed reps in order to get the new backfield up to snuff.

Pitt over the course of the game decided to bring pressure and stunt the line quite a bit. To start the second series, they guessed right and stunted a linebacker right into the trap-hole that Matthew Bergeron was pulling to. Normally this is a clean turn and kick out, but because of the stunt, Bergeron picks up the second man instead of the first. It’s unfortunate, but a bit of bad luck on the right defense being dialed up there. The first sack of the game comes on a third and manageable. DeVito may have been able to get a throw off, even as the pocket collapsed up the middle slightly, as Jordan does pick up Darius Tisdale’s lineman.

Until midway through the fourth drive, much of the issues are solely indivdual plays being made by good Pitt defenders. A lot of that is due to scheme and the ability of Pitt to bring pressure, between four and six guys every play, which is predicated on the air not being as much of a threat. At this point in the drive, the Orange collapse, with Airon Servais being beat on an outside-in rush for a second down sack. It’s immediately followed by Pitt bringing six men, and Chris Elmore and Carlos Vettorello missing some communication. That comes down to experience together, which these guys just don’t have at this point, through no fault of their own.

Later in the game the Orange seemed to find a way to run through the blitzing which opened the offense a little and showed some promise. Sacks negated 40 yards worth of rushing offense, which means designed runs averaged 2.7 yards-per-carry compared to 1.5, which still isn’t good by any stretch, but looks much worse based on the sack total.

This defensive front for Pittsburgh, even without Jaylen Twyman, is still extremely solid. With defensive ends Rashad Weaver and Patrick Jones II, defensive tackle Keyshon Camp likely in the 2021 draft pool, and the other DT, Calijah Kancey being an impressive (redshirt) freshman, it’s one of the toughest fronts the Orange are likely to face this year, especially out of peer program and not a Clemson or Notre Dame. That said, some of those names got handled better than others.

Bergeron had quite a day, holding Jones in check and looked to be one of the more stalwart pass blockers on the team. Carlos Vettorello also looked improved over his effort last week against Raymond Volasek and North Carolina. Elmore was tasked with holding Camp in check, and for the most part was fine on passing downs, but couldn’t get much movement on him, which I guess is why Camp is on prospect lists for the draft.

Tisdale had an alright day against Kancey, with a few noted miscues in the chart. A lot of it was due to lunging or getting wiped. Keep an eye on him not re-setting his hands well, or being overly reliant on pressure and leaning into a block. Without keeping your weight back until fully engaged, you’re succeptible to wipe and rip techniques pretty readily. The matchup seemed binary. Either Tisdale handled him, or he contributed to a sack.

Unfortunately for Airon Servais, most of the pressure came off his side, with Weaver managing three sacks and at least five pressures off his side. Some odd, inexperience type displays from the senior, including following his man down on a block while the end came free, and not even checking his outside, blind-side for the quarterback and releasing the end free on him. The outside speed rush seemed to get to him, especially later in the game. The lack of kick step and his hips opening up repeatedly make it seem like Weaver was just a very bad matchup on that side. Some things to work on, but I’d like to think the veteran will bounce back to form.

On the week, there’s now a bit of a blueprint to cause havoc on the Orange offense, by bringing pressure. Thankfully some of the rest of the teams on the schedule won’t have the defensive front that Pitt does to occupy a lot of the gap assignments for those extra rushers to take advantage of.