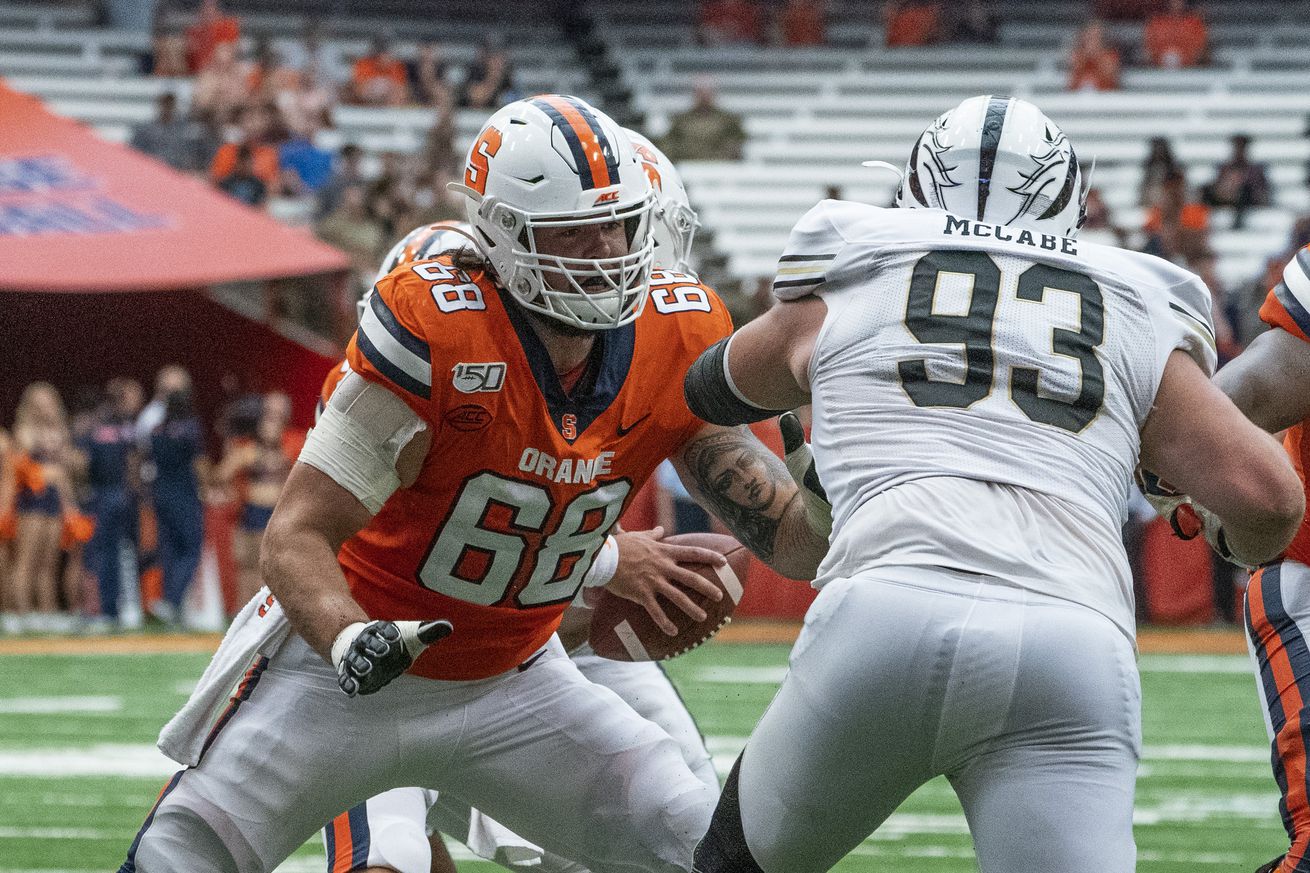 Because we all know the issues usually start between the tackles…

The Syracuse Orange had a rough go on the offensive side of the ball against North Carolina in their season opener. Since there wasn’t really much of an offense from either the pass or the run game, against an average-ish defense, that leads to the question “what went wrong?” The answer to said question, as with many questions that arise in the game of football, lies between the left and right tackle. This will be part of a weekly series where I decide to chart out the line and rewatch the game with a focus on the big men on the offense. All of my game charts can be found here.

Going into camp this year, there was a bit of hope for the line. A returning core of four starters, and the addition of potentially available transfer Chris Bleich from Florida provided a sense of stability we haven’t seen in the offensive line at Syracuse in a few years. Then camp happened. Dakota Davis is unavailable, still recovering from an injury, Bleich had his waiver denied, who knows what’s happening with the rest of the line but there’s a fullback/tight end/defensive tackle starting at left guard (and he did a pretty bang-up job).

Starting the game, the unit in general looked organized. Chris Elmore, the aforementioned utility man had some jitters in the first drive, whiffing on his first play, but settled in well after that. Carlos Vettorello right off the bat got a face full of Raymond Vohasek who drove him back on play one, behind the line of scrimmage. It didn’t have an impact on the read option that was called, but it portends things that happened later in the game.

By the time we reach the third drive, some points start to emerge. As you can expect, Elmore is more comfortable blocking on the move. He has a great release to the second level on the first play of the drive, sealing a linebacker. The third play of the drive is a Vettorello false start, and subsequently he follows the tackle twisting away from him instead of passing him off to Elmore, then being knocked off his block by Pat Davis, in for Darius Tisdale, and Matthew Bergeron getting beat by a wipe move, all on the same play. If you can imagine, Tommy DeVito ended up on the ground after this one.

That drive was a microcosm of a lot of the issues that arose through the game. There were a multitude of communication issues, though that is expected with a young line. But more importantly, there was a good bit of pressure up the middle of the line over Vettorello. He had some moments, yet overall, Vohasek had his way with him for a good chunk of the plays.

A lot of what was blown up on runs up the middle can stem from Vettorello having issues handling Vohasek man-up while run blocking. Numerous times, it caused Jawhar Jordan or Markenzy Pierre to have to adjust their runs on the fly as the lane wasn’t open and he couldn’t dig the nose tackle off the line of scrimmage. I’m not sure what we’ll see from Vohasek for the rest of the year, but he looked very good bull-rushing the Syracuse center.

The running backs had a rough go in pass protection as well, which bodes the question of whether it’s worth pushing them into protection more, as this offense normally does, or allowing them to delayed release as a check down which could work dual purpose. It would both allow DeVito a release valve that he could check to whenever needed and also keep the linebackers honest in coverage, forcing them to come up on the releasing running back. This pulls them out of the center of the field and could hypothetically open some cross-field throws up in DeVito goes through his progressions.

One of the other big question marks on the day was how Elmore would perform in his fourth position in four years. He put in a shift and ended up quite high on my list. There were some of the little things that someone who hasn’t played on the line since junior high school will need to adjust to over time, and a familiarity with his fellow lineman’s tendencies that only develop over time, but his technique and ability were definitely both up to the job.

Of the seven sacks on the day, I would attribute probably three to the offensive line (including RB blocking), three to coverage and one to poor decision making on the quarterback’s part. That number looks worse than it is, though most of those were right over the middle with the nose tackle flushing DeVito into someone outside.

All in all, there’s some work to do before the Orange face a solid Pittsburgh squad on Saturday at noon. Another road game that is going to be tough to win for the Orange against a defensive coach.