But on April 29, the 2020 prospect committed to Syracuse.

College football recruiting has taken a virtual form since the NCAA on March 13 implemented a dead period for recruiting, preventing in-person contact between coaches and prospects until at least Sept. 30. Virtual tours, routine FaceTime calls and pitches over Zoom have replaced campus visits and flights across the country to meet coaches and parents.

Following Gov. Andrew Cuomo’s stay-at-home order in March, SU recruits walked through the Hall of Languages, Bird Library and the university’s Quad from the comfort of their living room. Nineteen players have committed to the Orange since virtual recruiting began, including Sparrow and 2021 commits Duce Chestnut and Austyn Kauhi.

“It kind of goes back to old school where you have to watch tape, call high school coaches, call people in areas that may have seen these young men play to get the best evaluation of them that you can,” Babers said. “You’re not getting the opportunity to see them in camps, in combines, to make the best decision that you can.”

Before the pandemic, Division I schools hadn’t contacted Kauhi. The rising senior feared in March that he may never have the opportunity to impress college coaches. So, he took initiative.

Kauhi knew Syracuse offensive line coach Mike Cavanaugh worked at Hawaii in the early 2000s and discovered that his son, Blair, had his direct messages open on Twitter. He wrote a quick note and sent his highlight tape. A few days later, the 6-foot-5, 260-pound. tackle was on FaceTime with Cavanaugh.

The two talked about a mutual interest in fishing, the difficulties of living through a Syracuse winter and how Kauhi would fit into the up-tempo offense. By early April, Kauhi had his first Division I offer.

“No one from Syracuse ever saw me play other than through the internet,” Kauhi said. “I guess I had a really different recruitment than most people.”

Kauhi was impressed during his virtual tour by the weight lifting facility, locker rooms and practice field at Manley Field House. The campus felt “comfortable,” the offensive lineman said.

For the two months after his offer, he spoke with Cavanuagh or Babers at least once a week. Babers, a native of Hawaii, connected with Kauhi, and Kauhi valued SU’s appreciation of Ohana, the concept of family in Hawaiian culture. After fielding offers from Navy, Hawaii and others, he committed to Syracuse on June 13. 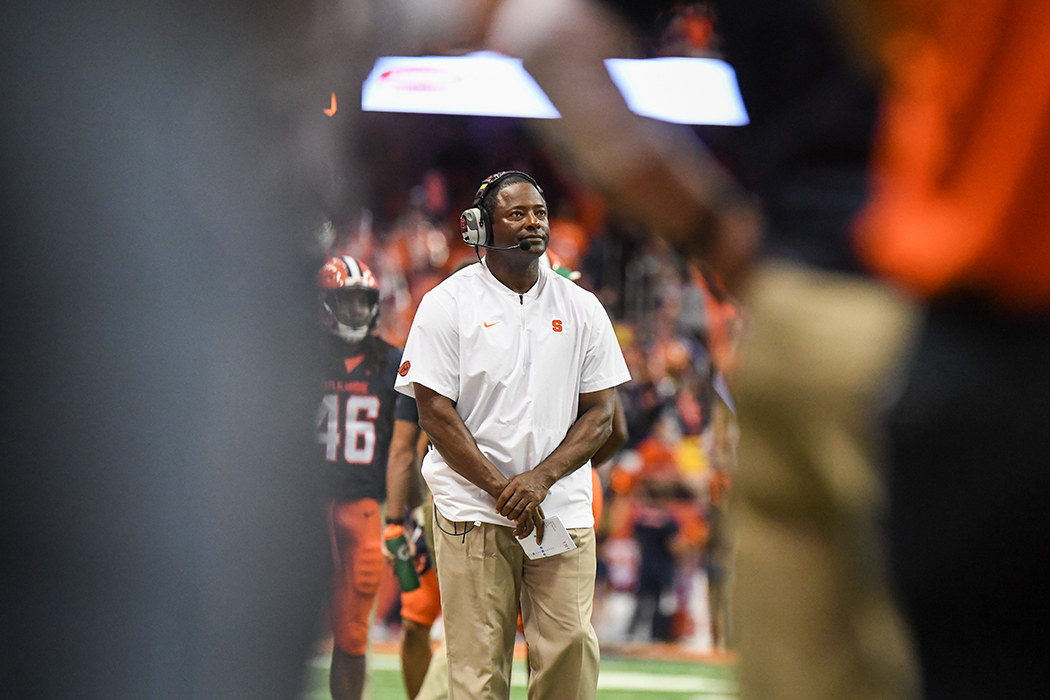 Despite recruiting through Zoom, Babers and SU have had success attracting recruits. Max Freund | Staff Photographer

Sparrow, who SU didn’t recruit until post-lockdown, didn’t have the option to wait out the decision-making process. The 2020 recruit wanted to enroll in a school by June to take part in summer classes and play in the fall.

The three-star linebacker was initially targeted by Louisville, Wake Forest and East Carolina during the first half of his senior year, but academic issues left him heading into 2020 without an offer. He was set to attend Georgia Military Academy until his grades improved in the spring and Division I schools returned.

Cornerbacks coach Chip West was the first from SU to contact him in April. West, an experienced recruiter of the Tidewater area, grew up a few miles away from Sparrow.

Sparrow received calls from Appalachian State and Norfolk State, both located closer to home. But he prioritized playing at an Atlantic Coast Conference school. He felt a connection with West because of their common hometowns, and Sparrow was confident that he would receive playing time even with more experienced linebackers in front of him on the depth chart.

Sparrow participated in SU’s virtual tour and researched Falk College to learn more about the university. He walked down the hallways and glanced around a classroom in one of the college’s buildings. The building impressed him, and he envisioned himself majoring in the sport management program.

While difficult, visiting campus virtually is the only feasible way to differentiate a program, Babers said.

“We’re showing them a tour of the stadium, the health center and our buildings,” Babers said. “I think the kids have loved it.”

Babers has consistently reiterated his distaste for Zoom recruiting visits, preferring face-to-face interaction where he can shake people’s hands. But with the NCAA’s extension of the recruiting dead period until Sept. 30, Babers will have to continue the adjustments.

“This may be one of our best recruiting periods ever, and it was done on Zoom,” he said.