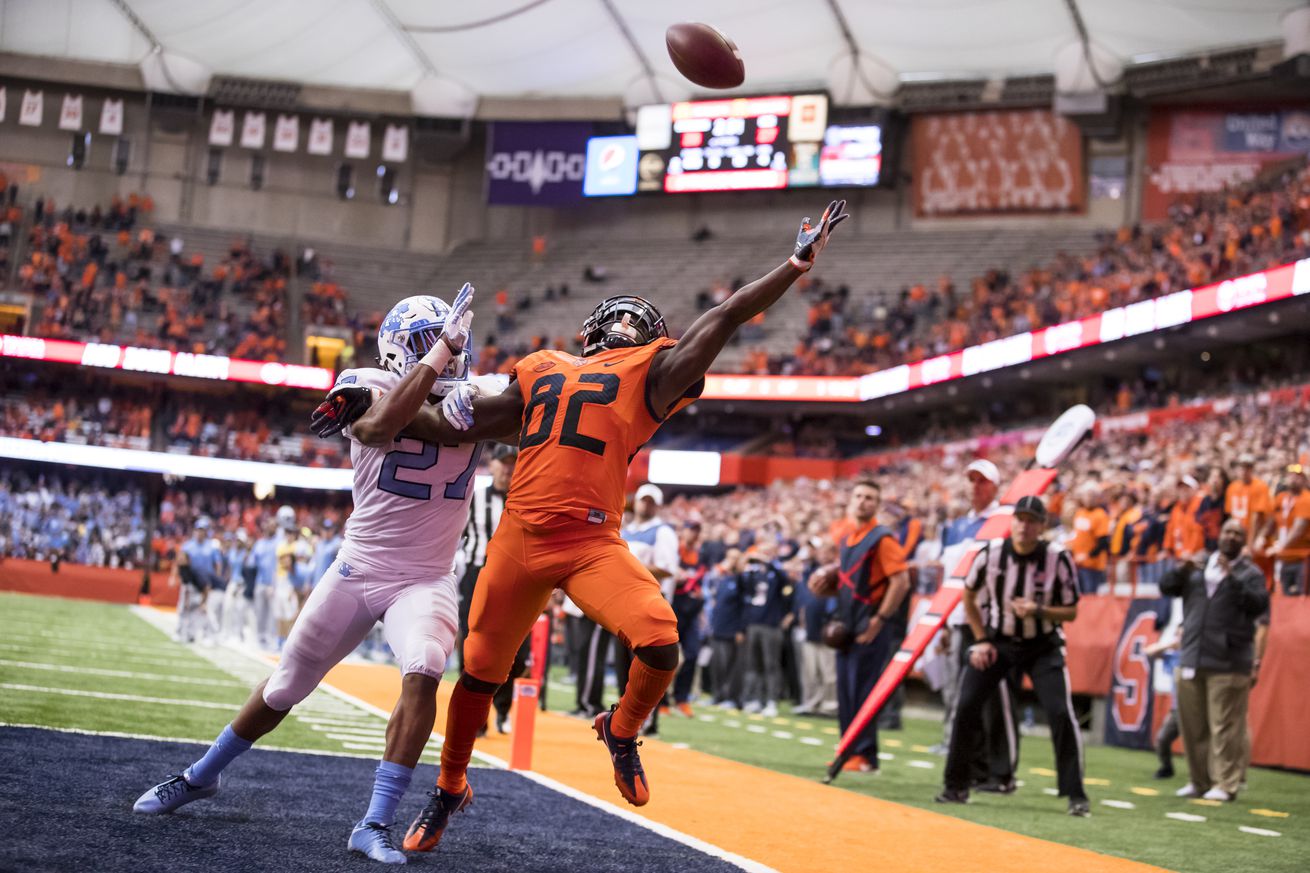 It’s finally here. After a weird offseason and a schedule change, the Syracuse Orange are ready to open the season against the North Carolina Tar Heels in Chapel Hill, N.C.

The last time these two schools faced off, Tommy DeVito showcased some serious skills and the Orange eked out a win in the Carrier Dome. Since then, UNC turned over the program to Mack Brown (again) and are a top 25 team. Who said the Orange were going to have an easy 2020? What will the TNIAAM staff be watching for this season opener? Read on to find out!

Andy: How does Tony White use Trill Williams, Eric Coley, and Andre Cisco?

I have been fascinated with the idea of a flexible secondary since Steve floated the possibility last week. The secondary is the strength of the defense, and being able to use a more flexible 3-3-5 scheme to allow these three playmakers to assist in run support and shorter passing situations makes a ton of sense, but I want to know if White is ready to take this to next level. It’s rare that a coach breaks out all their tricks in week 1, but not every team has to face Sam Howell. I want to see how these three are rotated, and how often their flexibility is used to create confusion, as well as supporting other units.

Christian: How will Jawhar Jordan perform as RB1?

Most of us had high hopes about Jordan’s sophomore season given the explosiveness he showed in four games last season. I doubt many saw him listed as the first choice running back to start the season, but Abdul Adams and Jarveon Howard opting-out has called for drastic measures. Jordan has certainly convinced people of his talent, but he’s getting thrown into a tough situation. Dino’s offenses rely on the running back a lot, and not just for rushing. The RBs are often the main communicator in the no-huddle offense as they share plays and adjustments from the sidelines. Of course, we’ll be looking with great interest at his offensive numbers, and if he can perform well, Syracuse might have options to increase its versatility on offense.

Kevin: What is the new game plan for the tight ends?

Aaron Hackett hinted last week that Sterling Gilbert added a couple of new wrinkles to the offense. With uncertainty on the offensive line and running back, the Orange could look to utilize the weapons they have at the tight end position. Both Hackett and Luke Benson can provide Tommy DeVito with reliable options and forcing the defense to focus on them could open up big plays on the outside. I’ll be curious to see if Gilbert lines these guys up in multiple positions like we’ve seen NFL teams doing with their tight ends.

Steve: Can Rhino fill in gaps on the offensive line?

With the news that Chris Elmore is LG1 on the new depth chart, going into week one, there are a lot of questions around a unit that had its share of criticism last year. The fact that injuries are bad enough that Syracuse moved their utility man to guard seems to not bode well, however, there are some solid upsides to his move. Elmore is used to down blocking as a tight end, as well as blocking on the move as a fullback. In the trap-heavy run game of this offense, he should be able to use some of that skill set. He also has returning starters around both him and new right guard Darius Tisdale. This will be the first test for what can only be described as a makeshift unit at present, so we’ll see where this goes.

Howell’s an excellent quarterback, but Syracuse also has a pretty good secondary. And as such, I think they’ll be able to throw enough at Howell to keep things interesting for at least a little while — also, some pressure wouldn’t hurt either, since he completed just 42.4% of his throws while facing any, according to PFF. But even if that happens, the Orange still need to find a way to slow down UNC’s capable rushing attack led by Michael Carter and Javonte Williams. Given how green these linebackers are and how much SU’s struggled to stop opposing ground games in recent years, I’m at least a little skeptical, especially in the opener.

How about you? What are you looking out for most this weekend?