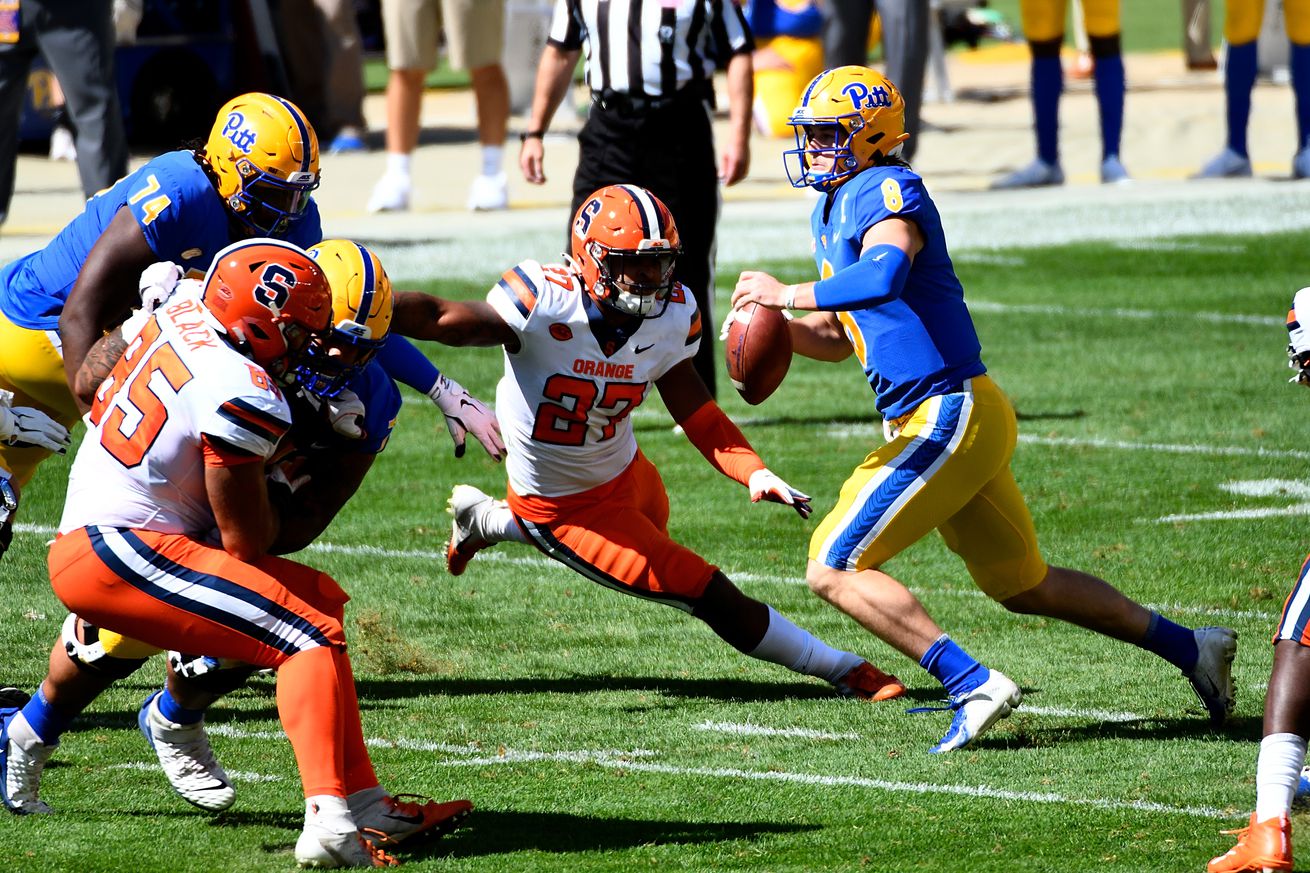 Hey a unit got an A!

It feels like the Syracuse Orange took one step forward before getting bounced backwards by a Fortnite bounce trap. For a brief moment it seemed like ‘Cuse found some of the necessary steps to improve from its UNC performance in Saturday’s game at Pittsburgh. However as the game slogged on, the same prevailing issues that ultimately led to SU’s demise against the Tar Heels showed up again against the Panthers.

That won’t stop me from breaking out my report card and dishing out some grades to the Syracuse units. Again, we’re working off a strict A to F scale with no plus or minus grades. Who’s getting what for their performance against Pitt?

If I could, I would do my best to defend the quarterbacks during any given week. There’s so much going on that I think offensive struggles won’t necessarily be on them week after week. However, against Pitt the quarterback play did not help the SU offense establish.

You expect a lot more from Tommy DeVito than what he showed against the Panthers. He went 9-15 with 32 yards and one interception. There were a lot of designed runs and options used during the game as well that DeVito did not execute cleanly with consistency. Rex Culpepper didn’t fare much better. Take away his 69-yard touchdown to Taj Harris and Culpepper went 3-8 for 19 yards.

There’s not a lot that Syracuse can blame their receivers for also. Almost every incompletion from the quarterbacks were the result of a bad throw. DeVito sticks to his first read for too long and Culpepper’s accuracy leaves a lot to be desired. Not a good day for the Orange signal callers.

This was a much better showing from the Syracuse running game than what the unit showed against UNC. That partially has to do with Pitt’s linebackers not being as strong as UNC’s linebackers but you can’t take away that the running game wasn’t the main focus of the offensive problems.

When the offensive line actually gave Jawhar Jordan a hole, he attacked that space well and gained decent yardage. The same can be said for Sean Tucker, who looked impressive in limited action. 63 yards on 17 carries isn’t going to overwhelm opponents any time soon, but there was at least something that looked like a rushing attack.

The biggest knock on this group is that Harris didn’t look in tune with DeVito for the second week in a row. However, without a full 22 camera, it’s hard to tell whether Syracuse receivers were well covered or just running bad routes. That being said, when the quarterbacks actually threw catchable balls, for the most part those balls were corralled in.

Harris himself also showed that he continues to be a hard tackle for any defense to make, but we expect more from a supposed number one receiver. Take away his touchdown and he had two receptions for three yards.

What also brings this grade down is that Syracuse tried something different with its playbook, bringing back the beloved bubble screen. However, those screens only work if the other wideouts can block effectively. That didn’t happen against the Panthers.

A stat I saw on twitter says that Sterlin Gilbert’s tight ends at McNeese State only earned six receptions for 35 yards in 2019. That cannot be the numbers that the Syracuse tight ends put up in 2020. Once again, Aaron Hackett and Luke Benson were not used at all in the receiving game against Pitt.

I know that a lack of spring ball and a new offense doesn’t help, but to ignore two of your top three pass catchers from last year is not on the quarterbacks. That falls squarely on whoever is designing the plays. Syracuse has electric options at its disposal with the tight ends. If neither are used in the same capacity as the other wideouts in the passing game against Georgia Tech, something needs to change to the game plan.

The offensive line opened up a couple of good running holes, but the group struggled to protect DeVito all game long. Yes, Pitt’s defensive line is one of the best in the ACC, but that can’t be an excuse for the pocket collapsing when the defense rushes four or five guys.

We saw multiple times offensive linemen get beat one-on-one. DeVito didn’t nearly have the same amount of time that Kenny Pickett had to throw. The SU running backs also showed that they can run up the middle as long as the offensive linemen get out of the way. This wasn’t a good follow up performance after a slightly rough week one.

An average performance from the defensive line gets them an average grade. The stats weren’t world beating from this unit, but as I’ve said with the 3-3-5, they don’t need to be. If the defensive line just earns a C from me from the rest of the year, then they’ve done what they needed to do.

The reason that the defensive line doesn’t get a higher grade is because they didn’t provide the same pressure that made Sam Howell uncomfortable last week against UNC. Nonetheless, everyone did their job. Josh Black and Cody Roscoe picked up a tackle for loss each, and Black picked up a sack as well. But to be honest, I don’t have too much bad to say about these guys. They don’t need to be incredible for the 3-3-5 to be effective.

What a performance from these guys. Last week, Steve Linton showed what he could do in terms of providing pressure, and this week it was time for Geoff Cantin-Arku and Stefon Thompson to show how well they could put pressure on the quarterback. Thompson picked up a sack and a tackle for loss while Cantin-Arku earned two tackles for loss and a QB hit. Mikel Jones picked up two QB hits and added his second interception of the season as well.

Tyrell Richards also returned to action after being injured in game one and also picked up a sack and tackle for loss. Marlowe Wax also had a tackle for loss. Going into the 2020 season, the linebacker unit of Syracuse was heavily questioned due to its youth and inexperience. The 3-3-5 has allowed the linebackers to flourish. They even did a better job this week in containing the run. An impressive game from pretty much everyone that played in the linebacker roles against Pitt.

I don’t necessarily think these guys played a bad game, but I cannot give the defensive backs an equal or a higher grade than what they received last week, which was a B against UNC. I think they played worse against the Panthers than what they showed against the Tar Heels, but that’s not to say they played bad in general. There were two main issues that I saw. The first was that the middle of the field was left a little more wide open than what I saw last week, especially in zone coverage. Pickett found his way through the zone multiple times to earn a 10-20 yard gain.

The other issue I saw was the play of Ja’Had Carter. I don’t think we saw much, if any of Eric Coley, and it showed against the Panthers. Both UNC and Pitt have made it a priority to target the inexperienced players of the Syracuse defense, and the Panthers picked on Carter with great success the entire game. Receivers that Carter was covering were usually four or five yards away from him when catching the ball. He did not look good in marking his guys. We saw against UNC how important the safety play is to the success of the 3-3-5, and it wasn’t as sharp against Pitt.

Just to reiterate, this wasn’t necessarily a bad performance from the secondary. It just wasn’t as good as what was shown against the Tar Heels.

After an inconsistent week against UNC, Nolan Cooney looked much more comfortable against the Panthers punting. Pitt didn’t have an opportunity to get anything going in the return game and often started their possessions deep in their own territory. Andre Szmyt hit his only field goal attempt of the game as well. Nykeim Johnson had a couple of questionable returns from kickoffs as well but field position was the least of Syracuse’s offensive worries.

The one thing that will derail Syracuse’s strong special teams is penalties. Drew Tuazama got away with a roughing the kicker penalty and an illegal block in the back was offset by another penalty. A bit more discipline there will only improve one of SU’s strengths.

What were some of those redzone and third down calls? Running the ball on third and long will continue to confuse me to no end. There were too many third and longs to count as well, although to be fair that’s not all on the play calling. Not getting Hackett and Benson involved as well is frustrating for fans to see. The less said about this probably the better.

So was I too harsh? Too lenient? Give your grades out in the comments below.