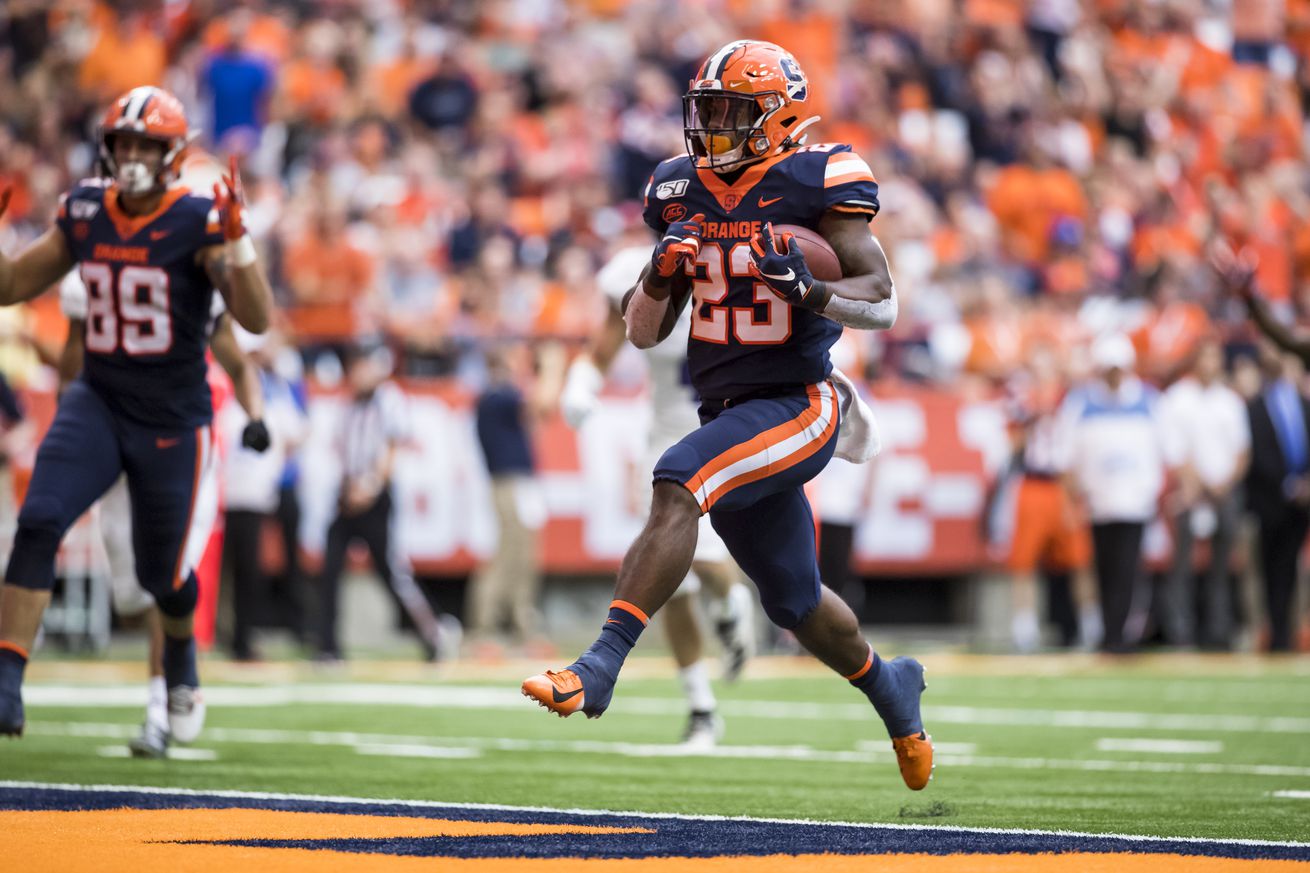 Given his recent comments, Dino Babers has raised some eyebrows…

Dino Babers held his final preseason press conference on Monday before the regular season kicks off for the Syracuse Orange on September 12. As you’d expect, Coach says plenty of interesting and thoughtful things during these pressers, but he doesn’t often raise eyebrows. However, this week something the SU head coach said has caught our attention here at TNIAAM.

Syracuse.com’s Stephen Bailey asked Babers for an update regarding the competition in the running back and linebacker groups for SU. Babers responded by saying he’s still trying to work out some situations in those positions. He mentioned injuries as one of the situations that they were dealing with and couldn’t give a clear picture of what was going on until those situations settled down.

Bailey then followed up by asking a question Abdul Adams and Jarveon Howard, who he noticed hadn’t appeared on any of the pictures and videos provided on social media or to the media in general. Bailey asked if those guys were practicing. Babers responded rather oddly:

“I think that you’ve got both of those guys telephone numbers, emails and twitter accounts that you can talk to them directly and find out exactly what’s going on.”

Now that’s rather strange. If there was no problem with either of those guys, you’d expect Babers to respond in a way that would say that both guys are practicing and that they’ll be ready for Syracuse’s week one matchup at North Carolina. The fact that he didn’t give a status update on either of those guys — and basically encouraged media to ask them — is at least a little concerning.

We don’t know if Adams and Howard have injuries to deal with or if they are dealing with other off-the-field situations. For all we know, they could have opted out of the season along with Orange defensive tackle Cooper Dawson (the only SU player to formally announce he’s sitting out this year so far). As of right now, however, we don’t know if they’re playing or not. And that’s concerning for Syracuse.

Experienced running back depth behind Adams and Howard isn’t exactly fruitful. Of course there’s Jawhar Jordan, but past him, Markenzy Pierre is the only other scholarship running back with college carries. Cooper Lutz hasn’t played in any games and recently switched positions, Garrison Johnson entered the transfer portal, and Sean Tucker’s a true freshman (we could also see a position switch back for Marlowe Wax if Adams and Howard are both out).

Babers likes to use a lot of running backs due to his high-tempo offense, and it is often the running back that will help Tommy DeVito communicate plays and adjustments from the sidelines. This group becomes extremely green without Adams and Howard, and that could severely hamper Syracuse if the duo is out for any period of time.

Speaking of lack of experience, Babers also mentioned that the linebackers were dealing with the same issues as the running backs. He also mentioned in last week’s press conference that the offensive line was dealing with some injuries and said that they could see O-line reinforcements coming four weeks into the season.

It’s no secret that the linebacker corps are reloading once again with the only player with significant game experience currently listed as a starter being Tyrell Richards. With a new defensive scheme as well, inexperience in the middle of the field could be a big problem as well that the Orange must deal with, especially if that linebacker corps has also been hit with injuries or other situations.

Clearly, injuries or other issues are stunting Syracuse’s development as they look to improve on their 5-7 from 2019. These recent comments don’t inspire much hope either as it looks like the Orange have a massive hill to climb in order to play at their full potential. We should know more about the state of SU when the two-deep depth chart is released next week in preparation for the season opener at North Carolina. That should come out on Monday, September 7, so keep your eyes peeled for any changes on that date.