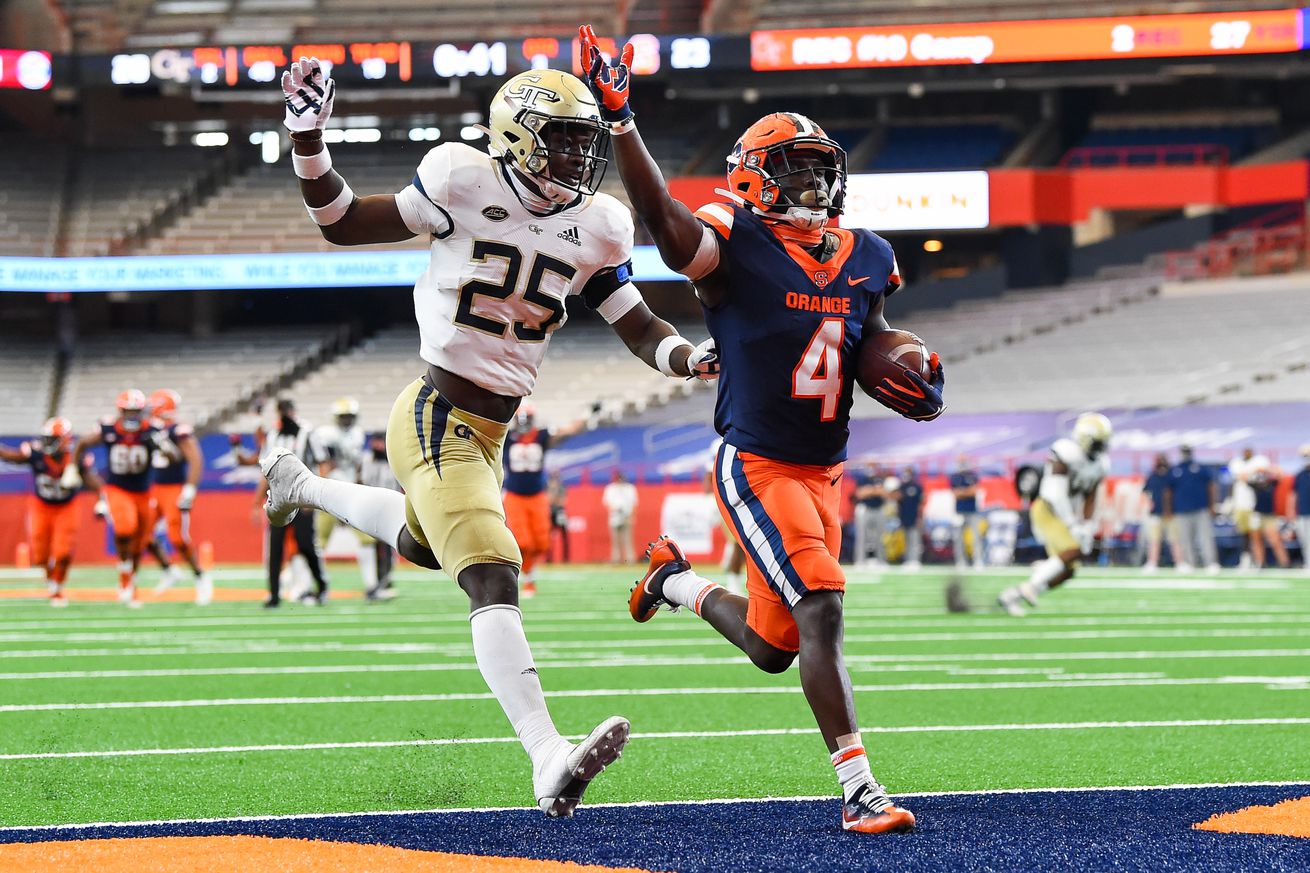 No one failed this week, so progress?

Alright everyone, class is back in session. I understand that you, Syracuse Orange football team, may have needed some time after coming back from the summer break slowly. You haven’t received the best marks on your first homework assignments but I’m glad to report that you graded well on your first test in the new classroom. I guess we know you’re excited about the new space because you kept on changing the color of the lights every time that you got an answer correct.

Also, due to popular demand, I’ll be adding plus and minus grades to your test scores. Just don’t get complacent when you go on fall break next week. You have an in-person homework assignment due in two weeks that we expect you to produce similar grades on, especially after the difficulty of the assignment was reduced today.

Ok now that all of that is out of the way, here are my grades for Syracuse’s game against Georgia Tech.

TD airs it out for a TD

That was a lot better from Tommy DeVito. 13 for 24 on pass attempts is not the best stat line, but he did throw for 194 yards and two touchdowns. Dino Babers said in his press conference that DeVito’s lone interception was more so on Taj Harris than the quarterback so I’ll give DeVito some slack there.

I like to do this because big plays can often skew numbers, but if you take away both of DeVito’s long touchdown throws – which were great throws, I’m not taking anything away from that – he still completed 11 passes for 105 yards, which is still a massive improvement from his previous two stat lines.

DeVito seemed more in tune with his receivers and hit his guys for medium yardage more often. He also demonstrated good pocket awareness on when to scramble upfield versus when to roll left or right. Overall, a great bounce back performance from him.

After seeing a Syracuse rushing attack average less than two yards per carry in its first two games, it’s a welcome change to see Sean Tucker come in off the bench for a banged-up Jawhar Jordan and average 4.7 yards per carry. The freshman running back impressed last week in limited action against Pitt, and he rode that momentum into an extended role against Georgia Tech.

112 yards on 24 carries are great numbers to see for an area of the Syracuse offense that failed to generate any vertical movement in the first two games of the season. Tucker also seemed to do a better job than Jordan and Markenzy Pierre on fighting for extra yards after contact. Two touchdowns from Tucker was the icing on the cake to a great game. It may appear that Babers has a new running back at the top of his depth chart for Syracuse’s fourth game of the season in two weeks’ time.

Remember I am grading these guys as a unit and the rest of the running back group needs to be addressed here. Jordan didn’t produce much in his only series of the game and Pierre didn’t get into the end zone from the one-yard line. But otherwise, a great performance from the Syracuse rushing game.

DeVito certainly has his favorites, and for the most part, they did a good job making themselves available. Harris and Nykeim Johnson found themselves open multiple times on streaks for the touchdown passes, but all Syracuse receivers found themselves open over the middle of the field on slant and in routes. Even if Georgia Tech’s secondary is a little weaker, Syracuse wideouts found success, even if not consistency.

There were a couple of drops and a couple of times when guys were asked to burn secondary players with speed and that didn’t happen, but for the most part there weren’t any other big errors that I noticed from the wide receivers. Beyond some miscommunication with DeVito on one or two routes, those small mistakes were the only reason that the wideouts get a slightly lower grade than they would probably like.

First the positives: the line kept DeVito clean for the most part. He was only sacked once and only took two quarterback hits. It seemed that there were some good holes for Tucker to run into and the tackles did well to keep edge rushers contained while he ran to the outside for decent yardage.

I have two big things that bring this grade down. The first is that the pocket still collapsed fairly quickly, even against a depleted Georgia Tech defensive line. While DeVito on average had more time to throw, there were still plenty of plays where he was forced to escape from the pocket fairly quickly, not because receivers couldn’t get open.

The second is penalties, including three for Darius Tisdale. Those stunted Syracuse offensive momentum, and clean games are needed to continue pushing the line on an upward trend.

A quieter but effective game from the defensive line. Some of the blame for the rushing yards allowed are on this group, but not entirely. The tackle numbers weren’t highly impressive either, but the individual efforts were great in terms of pressuring Jeff Sims into mistakes. Cody Roscoe impressed off the edge throughout the game and we saw contributions from the normal starters on the line.

Josh Black got a pick because of interference from Kingsley Jonathan and McKinley Williams found nice penetration on one play for a tackle for loss. Brownie points to Black and Williams as well for adding some blocking on Tucker’s second touchdown run. If these guys can help a little more on containing the run and providing just a tiny more pressure as a unit, that would round out the defense nicely.

We saw a very nice game from Mikel Jones, but other than that we didn’t see the same kind of pressure from the linebackers against Sims than what we saw against Pitt last week. That’s partially due to his mobility as a quarterback, but the main thing that brings this grade down is the run defense.

The linebackers are responsible for containing the rusher to no more than five or so yards. We saw multiple times Jahmyr Gibbs, Dontae Smith, and Jamious Griffin find seams and break tackles to rushes of more than seven yards and in some cases more than 10 yards. The linebackers have to be the biggest line of defense that stops the rush from gaining momentum, which is what happened in the third quarter.

The biggest knock on these guys are multiple missed tackles, especially against the rush. Yes the linebackers missed some tackles, but some of the safeties completely whiffed on some tackles as well, which allowed some of the longer rushes to develop for Georgia Tech.

If those were better contained, this would be an A performance from the DBs. You cannot ignore three interceptions from this group and the young guys continue to develop well for the Orange. Garrett Williams had another great game at cornerback as he’s developed into part of a nice duo with Ifeatu Melifonwu. The biggest surprise came from backup safeties Rob Hanna and Ja’Had Carter, who each had a pick. While Carter struggled against Pitt, he went largely unnoticed against Georgia Tech, which is a good thing. Hanna did a decent job as well as he played in Trill Williams’s position, who was filling in at the rover for the injured Andre Cisco.

The other knock on these guys is that Georgia Tech had some wide open receivers in the middle of zone coverage, which was an issue against Pittsburgh last week as well. While we have yet to see a team fully exploit that problem, the zone coverage issue might be the only crack in Tony White’s 3-3-5 armor that has turned heads through the first three games of the season.

Poor Nolan Cooney. I actually thought he did a decent job on his punts, but he was overshadowed by Pressley Harvin III on the other sideline. Andre Szmyt did miss another field goal and that wasn’t the best attempt I’ve seen from him. It initially looked like Georgia Tech got a hand to his attempt but on second review I don’t think anyone touched it.

Punt coverage could’ve been a little better as well but we saw two nice plays on the defensive side of special teams that helped a lot. We saw Tyrell Richards block a field goal attempt and Melifonwu denied Harvin a two-point conversion on a fake extra point. Another solid day from Justin Lustig’s guys.

For the first time this season, there weren’t too many head scratching issues on the play calls, which is a great sign of progress. We saw a lot more variety in terms of Tucker’s runs and routes run by the wideouts, which seemingly allowed the ball to flow more freely around the field. There definitely seemed to be more tempo generated by different ways to move the ball, a stark contrast to the limited playbook that seemed to be in effect for the first two games of the season.

The main issue comes from Syracuse’s third down conversions. We saw Syracuse find itself in more third and manageable situations but some of the plays had DeVito hunt for the long ball. Five conversions on 15 third downs is better than what was seen before, but you’d like to see that ratio go up in the future.

Your turn guys. What are you grading Syracuse this week? Sound off in the comments below.