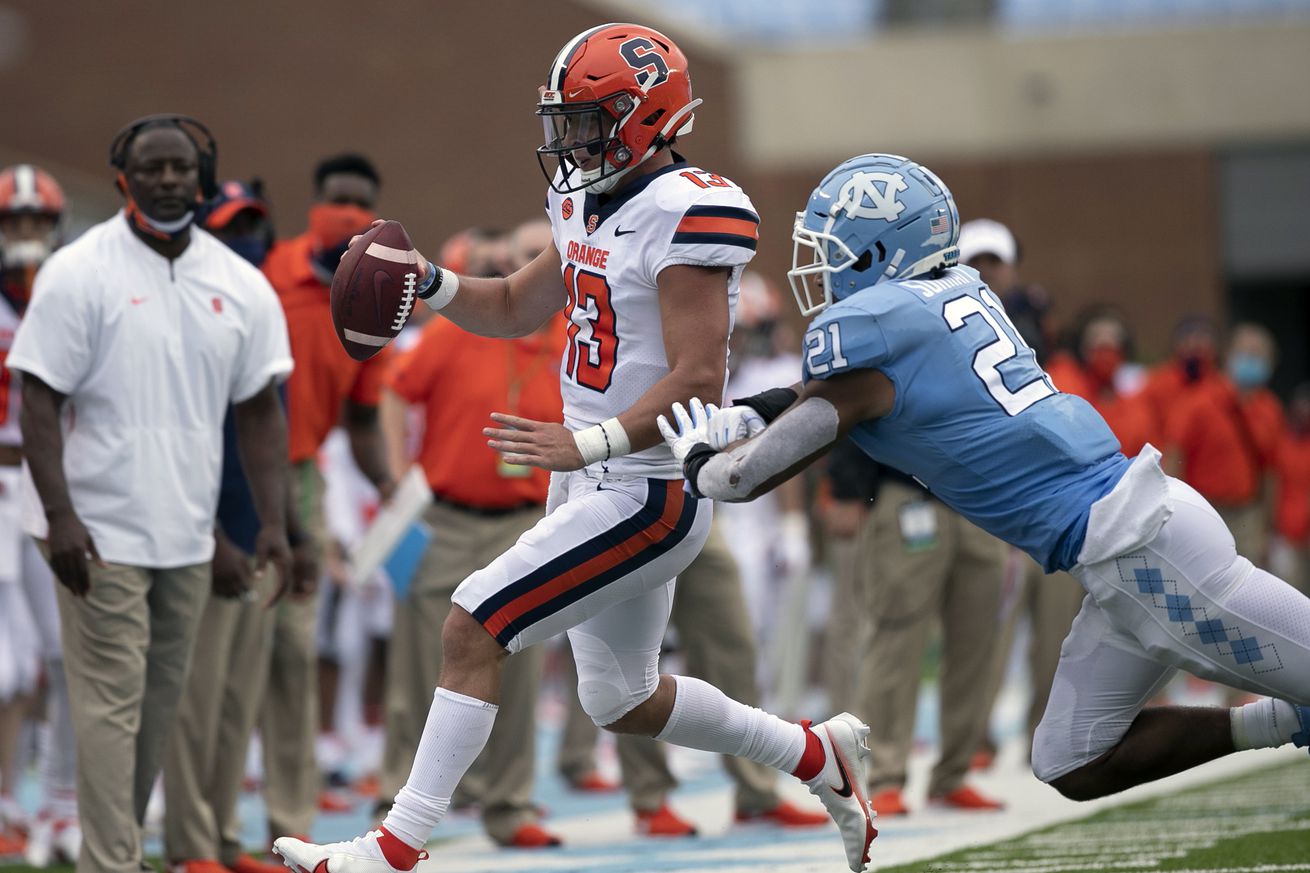 Spoiler alert: Not an A was given.

Well it wasn’t exactly the greatest performance from the Syracuse Orange against North Carolina on Saturday. A 31-6 score doesn’t exactly reflect the positives that can be taken away from this game. But as most of you pointed out, there’s plenty of things that need to be worked on in order for Syracuse to instill some hope in its fanbase.

So how do we quantify that? Well let’s give out some grades to the Syracuse units based on their performance against the Tar Heels. I’ll be going on a strict A to F scale – no plus or minus grades as well. Let’s get started…

A lot of you want to put blame on Tommy DeVito for the lack of offense on Sunday. I’ll issue some blame, in particular his connection with his number one receiver, Taj Harris. For 80% of his targets on Saturday, it seemed like the duo was on the wrong page on how the play was going to develop. In the end, DeVito went 13-of-31 with 112 yards and no touchdowns. He didn’t throw any picks, which was nice to see.

Something that was evident was that DeVito had options outside of Harris in the receiving game. For whatever reason, DeVito still kept firing the ball to Harris. I’d like to see a bit more variety in DeVito’s receiver selection in the future. That could help in setting some offensive tempo that was missing against UNC.

I want to be clear on this also — I’m not all out on DeVito. I think that many of the “mistakes” that we saw on Saturday can be corrected in due time for the 50-50 games SU faces in the dome later this year. But if DeVito doesn’t fix some of those errors, the Orange offense will continue to look lackluster.

I’m resisting the temptation to give these guys an F because I don’t think the running problems were entirely their fault. One, they’re running behind an offensive line that is replacing two starters. Two, the run designs the entire game were atrocious, especially in the red zone. That’s not entirely their fault.

However, we saw UNC also run the ball multiple up the middle and gain more consistent yardage than the ‘Cuse duo of Jawhar Jordan and Markenzy Pierre. Yes, Michael Carter and Javonte Williams have significantly more experience than the Orange rushing attack, but SU couldn’t establish anything on the ground. When your QB is your leading rusher and the majority of his yards come off (not designed) scrambles, something needs to be looked at.

These guys needed to help DeVito, especially in the first half. As I mentioned, Harris was not nearly in-sync with DeVito as we expected and multiple guys had key drops throughout the first half — the big one being Sharod Johnson’s dropped touchdown. The depth of this group was expected to be a weakness even before camp started, and some of that showed.

There were some positives as it looked like at times the middle of the field opened up a bit for some decent yardage. Anthony Queeley looked alright as well, showcasing why he beat out Ed Hendrix for depth chart positioning heading into camp. But these guys couldn’t get open, which led to multiple coverage sacks throughout the day.

I can’t give these guys a grade because they didn’t show up for class. Where were Aaron Hackett and Luke Benson on Saturday? Did the SU coaching staff forget about them? Did DeVito not notice them? Did the UNC defense take away those options in the middle of the field?

Hackett and Benson were the second and third returning players in receiving yards for the Orange. It would behoove the Orange to find a way to get them involved for the rest of the season.

Perhaps Steve could touch on this better, but it seemed like to me that the pocket collapsed a little too quickly on some plays which led to DeVito escaping the pocket more times than was comfortable. While seven sacks looks bad, not many of those were because of the offensive line, which is why they don’t get the F most of you are expecting.

I really want to give this unit an A, but there’s maybe more they could have done to nullify the run game of UNC. McKinley Williams didn’t do much at nose tackle, which is slightly worrying, but he’s not the main reason for this grade.

Kingsley Jonathan and Josh Black were exceptional throughout the game. It was clear from the beginning of the game that they’re plan was to make Sam Howell uncomfortable in as many unique ways as possible. They got a bit of help from the linebackers in that regard, but each defensive end picked up a sack and the duo combined for three tackles for a loss of yards.

I’ll put my hands up and be the first to admit that I didn’t think that the defensive line would necessarily see that much influence during a game due to the 3-3-5. But the unit was a key factor in limiting Howell’s effectiveness in the first half. That gives a lot of hope for the upcoming games.

Overall, not a bad showing from the young group, but not necessarily a great one either. The linebackers were pretty good in pass rushing scenarios to aid the defensive line in causing chaos for Howell. The linebackers that stayed back in pass coverage did ok, but nothing too noticeable save for one or two miss coverage opportunities.

The main downgrade on the side of the linebackers however is the failure to contain the UNC running game. That mainly falls on this unit, especially since there’s only so much the defensive line can do. The two units need to work together on preventing extra yardage after contact. The linebackers in particular didn’t plug as many holes as necessary to prevent an extra three or four yards per rush that accelerated the UNC rushing attack. Fixing the rush defense issues for the linebacker should greatly increase the influence of the unit during a game.

This was arguably the best unit in the game and another unit that I wanted to give an A to. The majority of Howell’s 295 passing yards came in the second half when the defense as a whole was gassed and tired, so the blame is not entirely on them. But the secondary has been seen as the strength of not just the 3-3-5, but of Syracuse in general, and they proved that today.

Andre Cisco looked to be in prime form, almost negating the need for Eric Coley and Trill Williams’ help in the safety position. Ifeatu Melifonwu seemed to scare Howell so much that he avoided him for the majority of the game. That left young players like Garrett Williams and Neil Nunn in one-on-one matchups which Howell attacked relentlessly. While there were some mistakes from the young players in these matchups, both performed above expectations and laid a strong foundation for Syracuse to build upon.

This is usually a place of strength for Syracuse, but multiple things went wrong. First, a Drew Tuazama penalty negated a Nykeim Johnson touchdown, who looked pretty good in the return opportunities he got. Andre Szmyt missed a chip shot that was from a tight angle but a kicker of his caliber should be converting those.

Nolan Cooney had an inconsistent afternoon as well. His first couple of punts were not that long. His punts in the second half went far, but didn’t have enough hangtime which allowed Dazz Newsome to gain a lot of return yardage. All in all, not the best showing from the special teams unit.

Now I was going to end here, but I have to bring this part up. If this part of Syracuse stabilizes throughout the season, I might stop mentioning it. But right now, it needs to be discussed.

This was painful to watch throughout the game. Almost nothing but runs up the middle, especially in the red zone. Plays that didn’t put Syracuse in short yardage situations to move the chains. Red zone play calling that didn’t advance the ball. Plays that didn’t utilize the talents of Syracuse’s playmakers.

What we got instead didn’t show any of the “wrinkles” that Sterlin Gilbert supposedly put into the offense. The play calling needs to get better or the Syracuse offense won’t unlock the explosive potential that it has.

Now it’s your turn. What grades would you dish out to the Syracuse units? Sound off in the comments below.