TOWSON, Md. — When the final pass on the final possession of the 2021 women’s lacrosse season sailed through the air, a crossfield heave that had no impact on a final outcome sealed long before, Charlotte North started to jump. First to her right. Then back to her left. She whipped her mask off and threw her stick as her 5-foot-7 frame — the same one that had lifted Boston College’s season to this point, built it a lead in the national championship game, and sunk Syracuse’s year with one final dagger — bobbed around until she blended in with the rest of her teammates racing toward their goal.

At the other end, the Orange also descended on their goal, just at a slower rate. Heads dropped. Knees bent. The jubilation that had engulfed their postgame huddle just two days prior had evaporated. North’s dagger, a free-position goal with 16 minutes left in the second half, put the Eagles up four. Thus, BC set the NCAA’s single-season record for goals in a season at 101 goals — each goal defining the rise of Boston College’s year and the final five signaling the fall of Syracuse’s — inching them closer to a point that the Orange couldn’t come back from.

All the pieces that Boston College needed for a chance at its first national title meshed together, bringing them to this point. These pieces included holding Meaghan Tyrrell, the centerpiece of the SU’s offense after its two best players tore their ACLs, to a scoreless first half and a two-point performance. It included holding Syracuse to more turnovers (five) than shots and goals combined (one) in the 10 minutes after halftime and just two goals in the final 30 minutes. And it included flipping a tie game into a blowout, turning three-straight title game losses into the one elusive national title, and ending Syracuse’s season one win short of lacrosse lore with a 16-10 loss — sending the Orange toward a season-ending fate similar to the 23 seasons before. Despite a run to the title game without its two top scorers, Syracuse once again came up short of its first national championship in program history.

“We tried to change our defense to match up better, match up differently and give them a different look,” goalie Asa Goldstock said postgame. “And we’re getting some stops. But we really could never piece it together as a team.”

Early-season injuries sent Syracuse’s offense searching for answers days after winning its opener. And instead of finding solutions to help them scrape by, the Orange concocted an offensive mixture that soaked up personnel losses and double-teams and still found a way toward championship weekend. Freshman Emma Ward scored four goals two weeks after Emily Hawryschuk’s injury. Sophomore Emma Tyrrell scored six goals the game after Megan Carney went down in late April. And Emma’s older sister, Meaghan, stepped into the offense’s feature role and tallied seven goals in mid-April and another seven weeks later against Loyola in the NCAA Tournament.

That balance strengthened SU’s foundation and opened a window for future national championships — which opened a tad further once Hawryschuk announced she’d return next season. And it nearly helped the Orange earn their first one on Sunday at Towson University, when Boston College shadowed Meaghan Tyrrell with two defenders off-ball at times. The Eagles never left her with open shooting lanes inside the 8-meter — holding her to a scoreless half for the first time since the Atlantic Coast Conference championship game — and forced others, like Sam Swart and Sierra Cockerille and Emily Ehle, into critical roles.

Emma Tyrrell scored the Orange’s second goal of the game in transition after BC’s Cara Urbank missed an open net and hit the post. But then Emma Tyrrell picked up two yellow cards in two minutes, was disqualified, and watched as Jenny Markey and Maddy Baxter took her spot at attack.

“Emma, the way she’s been playing, she was tough to replace,” Gary Gait said postgame. “And a little bit too much to replace, obviously.” 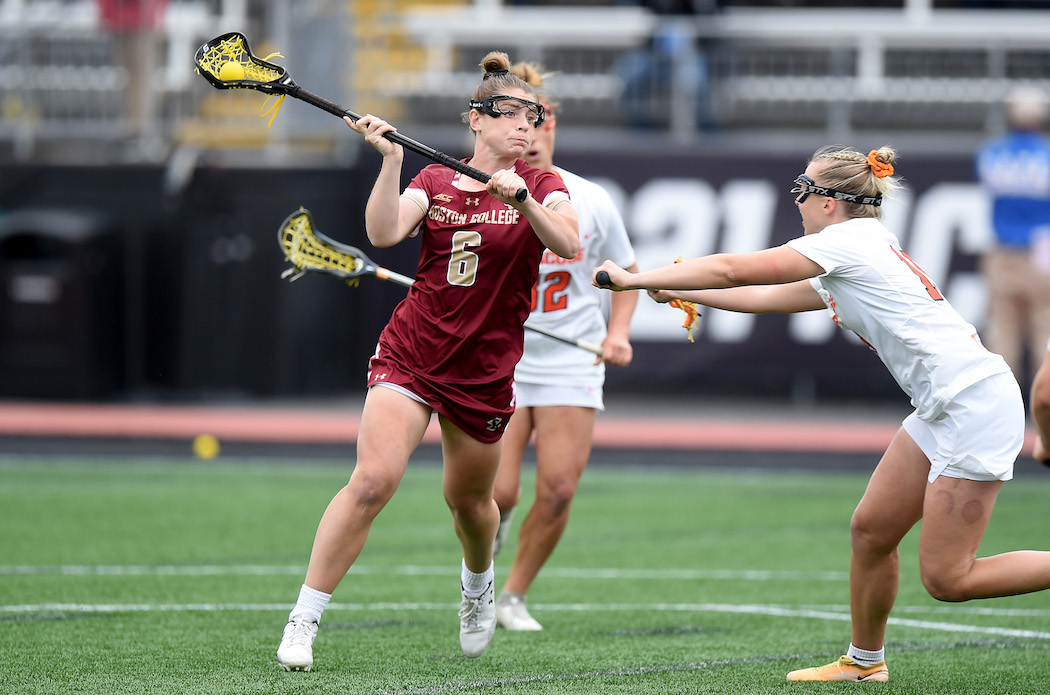 Boston College scored two goals on Emma Tyrrell’s two penalties, though Markey assisted on the first SU goal after the ejection to tie the game at 5-5. North’s third goal of the half put BC up minutes later — with Syracuse deflecting a pass yet leaving North wide open by the left post, allowing her to easily beat Goldstock one-on-one — and Ward pulled Syracuse within one point heading into halftime.

Then the run from Boston College came, continually bending the Orange until they reached a breaking point. They could’ve broken sooner, after either of the ACL tears or close losses, but instead they took a 7-2 run that stretched across the final 30 minutes — one filled with passes that ended up on the ground or in BC sticks, with dropped passes near the crease, with errors that, when combined, caused SU’s deficit to compound. The Eagles kept feeding the ball toward the middle and piercing SU’s defense, Goldstock said. Emma Ward brought her defender behind the cage before drawing a slide and losing possession. Then SU couldn’t take advantage of a no-goal call and create a two-goal swing in transition.

“We unfortunately got a little bit in the situation where we’re pressing it and trying to score,” Gait said, “and unfortunately that meant taking some bad decisions on their feeding and shooting.”

At 3:02 p.m., as Gait shuffled in place behind a computer screen tucked away from the Johnny Unitas Stadium turf, Boston College players broke from a group photo and strolled back toward the center of the field to find their sticks. The sticks rested in a pile by where the makeshift trophy table had stood, equidistant from the two nets which now had giant chunks of mesh cut out and missing. While the Eagles celebrated, Gait fielded questions at his postgame press conference, touching on the obstacles, the injuries to Hawryschuk and Carney, the missed opportunities against the Eagles that had the potential to erase all of the program’s national title “what-ifs” and turn them into one new reality.

The stars were supposed to align for SU this year, and they nearly did — just in a way the Orange never imagined. They lost the big games in the regular season and ACC Tournament, lost their two best players to injuries, then took those new expectations and nearly defied them across 240 minutes of game time.

But the last 60 minutes finished the chapter of the women’s lacrosse history book titled 2021, the same one with subsections about COVID-19 protocols and torn ACLs and two undefeated teams losing in the Final Four, and its final image will look like this: 33 pairs of Boston College-branded helmets and face-guards flying through the air simultaneously and the Johnny Unitas Stadium scoreboard flashing zeros.

There’s the burgundy and white confetti and BC’s Jillian Reilly sprinting across the field before thrusting the trophy toward the fans standing in the bleachers. There’s Asa Goldstock’s final stroll off the field where she turned around twice to wave, the gray t-shirts that the Eagles pulled over their jerseys as Syracuse dragged equipment bags toward the locker room, the pictures that’ll appear in locker rooms and frames for decades.

And, when all that added up, there’s the reminder of the legacy the Orange almost created for themselves before falling short.

The post Syracuse falls short of 1st-ever NCAA title in 16-10 loss to Boston College appeared first on The Daily Orange.