SOUTH BEND, Ind. — In the middle of the third quarter, Megan Carney broke a 10-10 tie with multiple moves that helped her get ahead of Virginia defender Ellena Schildmeyer and easily score. But exactly a minute later, the Cavaliers responded.

Virginia’s Megan Gordon won the ensuing draw, and the Cavaliers began their attack. Morgan Schwab held the ball behind the net and faced aggressive pressure from Bianca Chevarie. But Schwab was able to maintain possession and move in front of the goal, drawing Hallie Simkins away from Ashlyn McGovern, who received the ball.

McGovern weaved past SU backup goalie Delaney Sweitzer to tie the game at 11, kick-starting a 5-0 run for the Cavaliers that extended into the fourth quarter, ultimately cementing their win. While the Orange continued to score in the final quarter, they couldn’t keep up with UVA’s attack, only getting as close as three goals.

The final 21 minutes of the Atlantic Coast Conference quarterfinals highlighted Syracuse’s (13-5, 6-2 ACC) inability to respond to and, more importantly, stop Virginia’s (9-8, 3-5) dominant attack in a 18-14 upset loss on Friday. The Cavaliers missed only one shot on goal as they tied their most goals against an ACC opponent all season, outdueling a likewise successful SU attack.

“They played really efficient. They finished their shots, and they were ready to play,” SU head coach Kayla Treanor said.

Virginia’s attack was nearly perfect early on, scoring 14 goals through three quarters. After Olivia Adamson opened the scoring less than a minute into the game, the Cavaliers scored three straight goals. Mackenzie Hoeg and Rachel Clark both scored before Morgan Schwab shot from the center of the arc and beat Hower to make the score 3-1.

Then, following Meaghan’s score, Schwab took advantage of a busted coverage. Sam Swart turned the ball over near the midline, and Hoeg picked it up, firing a long pass to Schwab, who was all alone with no SU defenders near her. Hower came up high in the crease to try to stop Schwab but wasn’t successful, and the Cavaliers went back up 5-4.

The Virginia duo of McGovern and Clark dominated throughout the game. McGovern had a hat trick just on free-position goals, and she, combined with Clark and Schwab, finished with 13 goals, one fewer than Syracuse’s entire team.

“(McGovern and Clark) were finishing their shots,” ‘Meaghan said. “They also got their free-position opportunities, and they were putting them away today.”

The Cavaliers ended the first half with a connection from Schwab to Clark, who scored on a hard shot to record her fourth goal of the day as the shot clock expired.

But the Orange didn’t let the lead grow out of control. Meaghan flipped the ball to Natalie Smith, who got hit in the face by Hoeg and was awarded a free position. Smith’s free-position shot went wide, but Adamson picked it up and eventually found Carney. Carney paused before passing to a streaking Meaghan, who scored on the right side of the net.

Meaghan excelled with a team-best four goals and scored a game-tying goal in the third quarter. After Maggie Bostain hit Smith, giving SU a free position, Smith’s attempt went over the net. But the ball remained with Syracuse, and Meaghan scored after some reset dodges. While Carney’s goal gave SU the lead for the last time, no one on Syracuse could stop Virginia’s ensuing run. 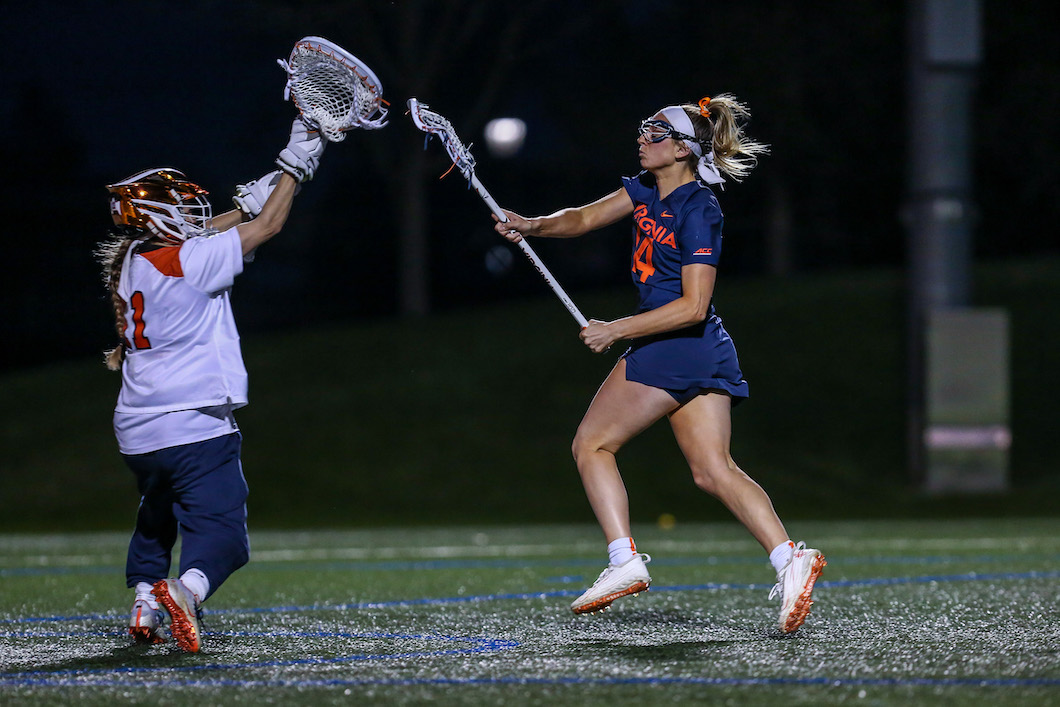 UVA’s offense notched one of its most efficient games of the season in the four-goal win. Courtesy of Rachel Pincus | TheACC.com

Three minutes following McGovern’s second score of the night that broke the 11-11 tie, the Cavaliers were on the woman-up after Maddy Baxter picked up a yellow card for knocking Myla Grace Barnett over. Clark took advantage of multiple Syracuse defensive lapses to give Virginia a lead that it held for the remainder of the game. Clark finished with six goals, tying a career high.

Toward the end of the quarter, the Orange had three players in the box with three different yellow cards. McGovern took advantage, scoring consecutive free-position goals while not moving a step closer to the net on either of them. Treanor was visibly furious at the multiple cards but said postgame she was mostly unsure of what happened on the plays.

After the dominant 5-0 run, Virginia received contributions from other players. Braeden Dial made a spin move past Sarah Cooper, and despite significant congestion in the 8-meter, Kate Miller had an opening to score and move UVA’s lead to 16-12.

Syracuse’s starting three attackers tried, unsuccessfully, to create a comeback in the final 15 minutes. Meaghan connected with a curling Adamson to score. Hawryschuk and Carney scored as well in the waning minutes.

But the Orange, playing with a desperate press, failed to even things up. Kiki Shaw connected on a high pass to Dial to seal the final score, cementing SU’s first two-game losing streak since 2018.

“It’s hard to lose when you shoot like that,” Treanor said. “I don’t think we played our best, and I think Virginia played a great game.”

The post Syracuse fails to keep up with Virginia’s dominant attack in 18-14 ACC quarterfinals upset appeared first on The Daily Orange.