Virginia’s men’s soccer team boarded the bus and departed for its Sept. 19 exhibition against Syracuse. But instead of the first on-field action for both sides this season — beyond intrasquad scrimmages — a positive COVID-19 test within SU’s program forced the UVA bus to turn around and head back to Charlottesville.

The positive case, which also resulted in the cancellation of SU’s Sept. 25 opener against Navy, occurred on Sept. 13, and pushed back the Pitt game from Saturday to Tuesday. Now, the Orange are set to take the field in Syracuse against the Panthers, marking a return to play 17 days later than anticipated. Instead of typical preseason games and a non-conference schedule, the Orange will be forced to jump right into Atlantic Coast Conference action.

“They’ve been resilient, they’ve pivoted when they’ve needed to and we’re excited to have the opportunity to welcome a terrific Pitt team,” head coach Ian McIntyre said during a Zoom press conference Friday. “Probably not the way I’d had written it for your first game of the season, but it’ll be fun.”

A full two-week quarantine period relegated Syracuse back to Zoom meetings and virtual training sessions with only a couple of days back together before its opener. Despite being unable to take the field, the Orange have tried to make the best of it. McIntyre said he enjoyed seeing his players’ various Zoom backgrounds and finding out who keeps the messiest apartment.

Players used couches and chairs instead of gym equipment when lifting weights, and followed the TeamBuildr app for workout routines. McIntyre credits strength and conditioning coach Corey Parker for effectively engaging and challenging the team to stay fit.

Still, there are player availability questions heading into Tuesday’s game. The player who tested positive for COVID-19 has since cleared protocols and is back with the team, McIntyre said, though he is unsure if the individual will play. He added the coaching staff will “make sure we make good decisions on all our players,” regarding who’s physically ready to play after such a long layoff, noting junior midfielder Julio Fulcar as one player nursing an injury.

Despite the added challenges of these circumstances, McIntyre said he’s not taking anything for granted.

“Right now there’s probably about another 170-180 programs that would love to be in our situation right now of having a chance to compete,” McIntyre said. “And we’re going to take advantage and I’d certainly rather be playing right now than not playing.” 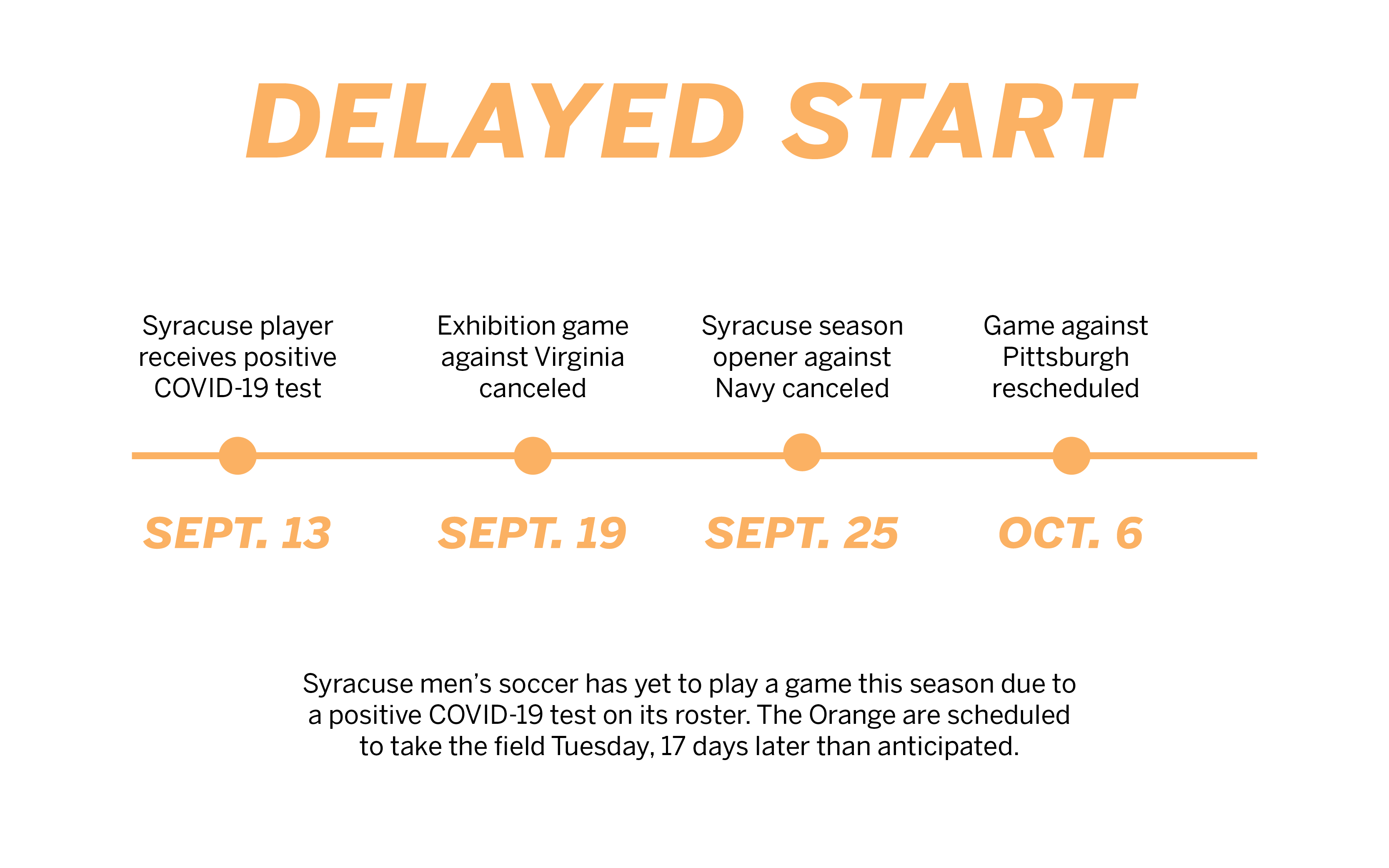 With the loss of last season’s top two goal scorers, Ryan Raposo and Massimo Ferrin, McIntyre emphasized that the Orange will need production from returning players. Hilli Goldhar and Luther Archimede will see a potential increase in on-field responsibilities, and some of Syracuse’s 14 new players will also get opportunities. Specifically, McIntyre mentioned freshmen DeAndre Kerr and Jack Coleman as well as transfer forwards Roque Viegas Jr. and Manel Busquets as players who might play key roles.

With considerable roster turnover, McIntyre also hinted at a potential change from his standard 3-5-2 formation at some point in the season, saying his players will dictate the team’s style of play.

“Our DNA will be the same: Us being brave and aggressive and being on the front foot,” McIntyre said. “We’re gonna play against a Pitt team that if we give them a lot of time on the ball, they’ll pick us apart. They’ve got some extremely talented players and if Pitt are allowed to get into a rhythm then it’s going to be a long night.”

The Panthers will arrive in Syracuse coming off a 3-1 win over Notre Dame in their opener — in addition to two full ACC exhibition games against Wake Forest and Louisville. The Orange haven’t played a game since November.

“We had (virtual) trivia nights and pizza parties and ice cream parties,” McIntyre said. “Now is that 101 coaching in preparation for an ACC opener? Perhaps not, but that’s the 2020 version and we’ll see. If we win on Tuesday night, it’ll be down to OIP and Häagen-Dazs ice cream.”