Syracuse grabbed its first win of the season on Saturday against Georgia Tech, heading into the bye week at 1-2. Given this season’s expectations, SU’s offense has struggled while its defense has shined, forcing nine turnovers and keeping the Orange in games against nationally-ranked opponents in their first two games.

The Orange will play Duke and Liberty as they come out of the bye. Here are some key numbers that could predict some bright spots and trouble areas ahead:

Syracuse is one of the nation’s worst offenses

Even with the offensive improvements against Georgia Tech, only Charlotte has a lower predicted points added per play in the NCAA. This means that, on a per-play basis, only one offense has been less efficient than Syracuse.

SU has struggled in just about every phase. Even when facing a Georgia Tech defensive line that allowed lots of defensive line yards, Syracuse’s line wasn’t able to generate much of a push, accounting for 2.4 total line yards.

Tommy DeVito has regressed from 2019 on a predicted points added per play basis. Despite the offense’s issues in 2019, DeVito was consistently positive on cumulative PPA average. This year, his rolling average places him at the bottom of the ACC and in the negatives.

His rolling average did make a small uptick last week, but as shown in the graph below on collegefootballdata.com, he remains below zero. 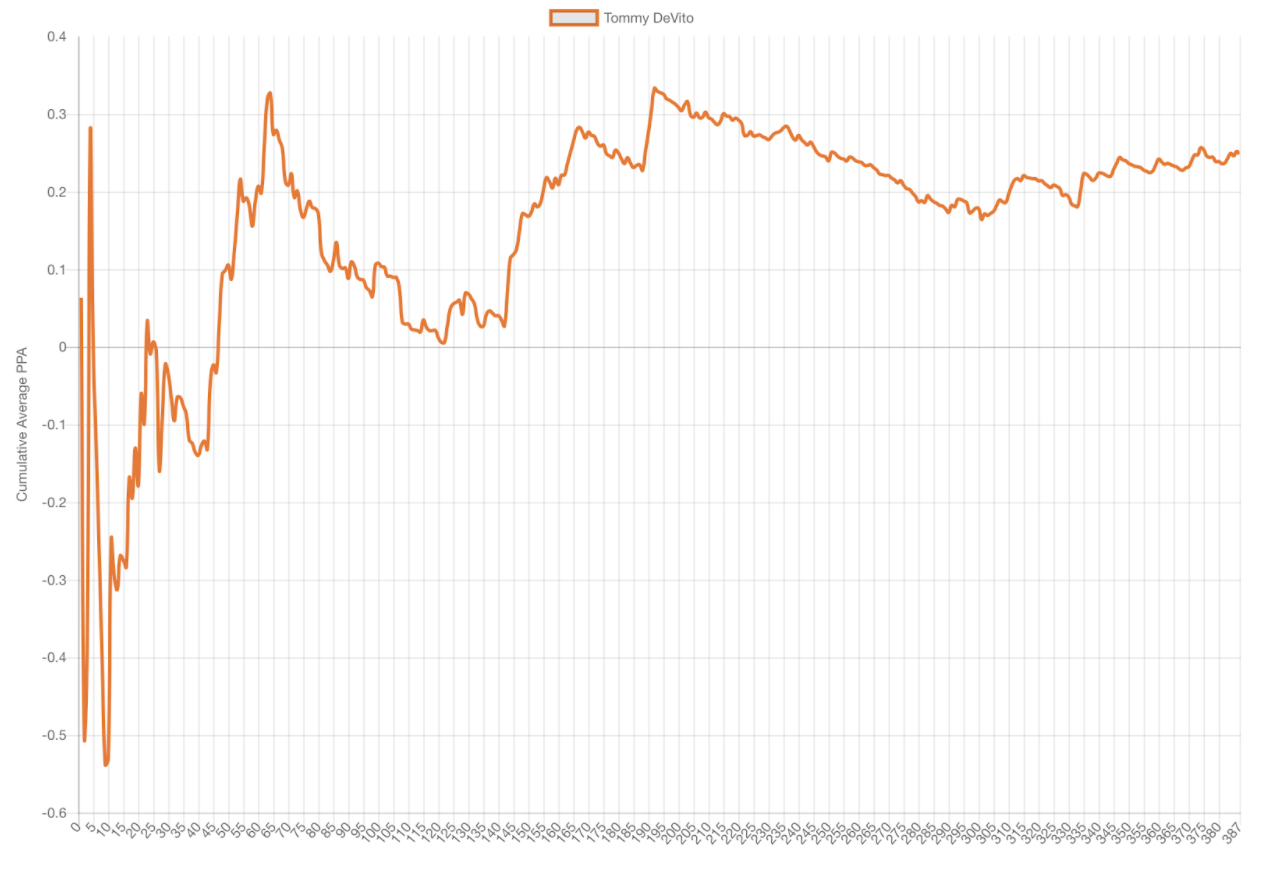 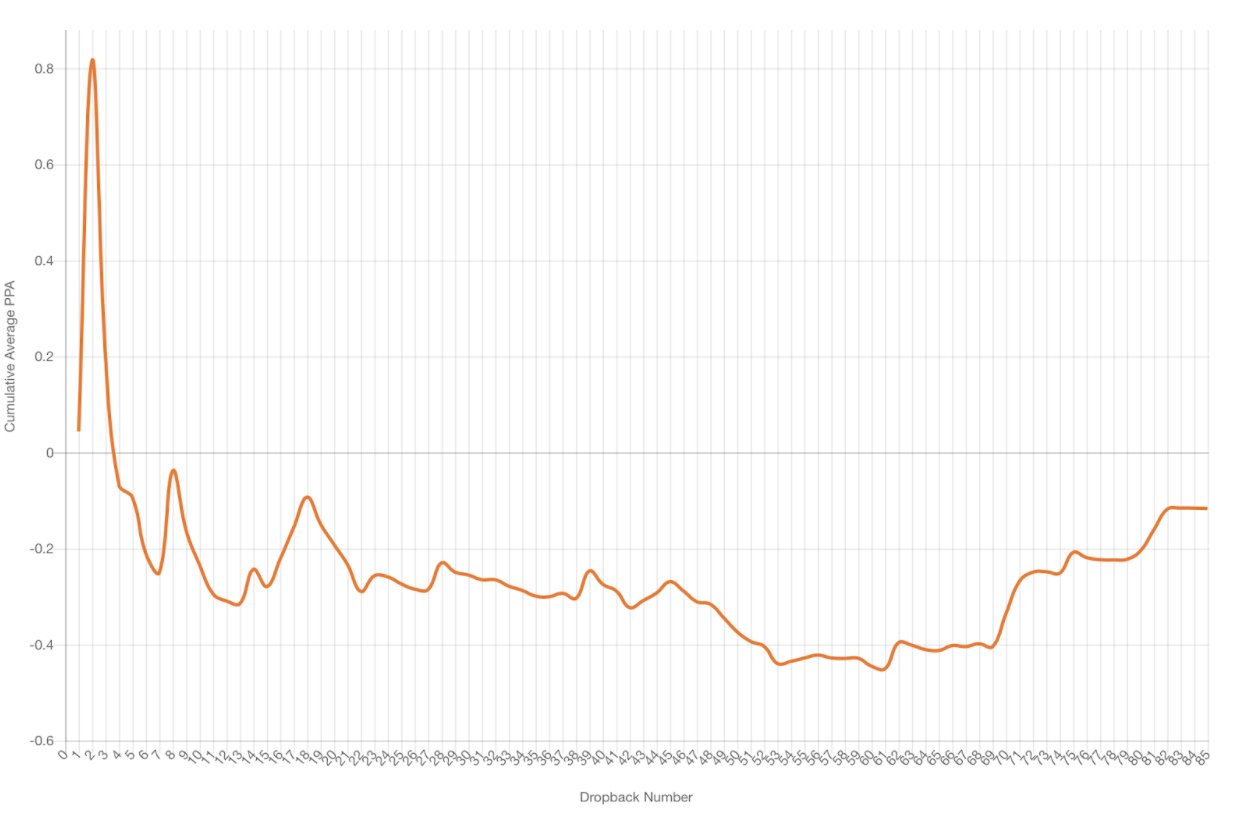 While Syracuse’s offense ranks at the bottom of the ACC in success rate, the Orange are up to seventh in explosiveness following two big plays in Saturday’s win. DeVito’s long touchdowns to Taj Harris and Nykeim Johnson were critical, not just because of the points, but because they helped SU avoid the red zone, where it has struggled all year.

Syracuse entered the game against Georgia Tech as the nation’s second-worst team in finishing drives. The Orange were much better at converting drives inside the Yellow Jacket’s 20-yard line into points on Saturday, but through three weeks, the aggregate numbers are still less than ideal.

The Orange improved from second-worst nationally to fifth-worst, passing Arkansas, Missouri, Tulsa and Vanderbilt, all four of which played their first game last weekend. Syracuse’s 1.625 points per scoring opportunity is still the worst in the Atlantic Coast Conference, but SU did play two ranked opponents in its first two games.

Against lesser competition, Syracuse was able to execute better. They had 2.83 points per scoring opportunity in Saturday’s win after failing to eclipse one in the first two games.

Defensively, the Orange’s have been much more effective at preventing opponents from finishing drives. They’ve allowed three points per scoring opportunity, which is lower than the national average, and tied for 5th in the conference. Part of that efficiency is due to some opponents’ missing field goals and the Orange blocking a few on special teams. Syracuse’s special teams unit has helped make its defensive numbers look better than they should.

With the noted caveat of the opposing defenses’ being much tougher in the first two games, Sean Tucker was a much more effective runner at both the second level and in the open field than Jawhar Jordan and Markenzy Pierre were in SU’s first two games. Syracuse ranked dead last in the ACC in open field yards and third-to-last in second-level yards in the opening two contests.

Those two games almost exclusively featured Pierre and Jordan. Before game three, Babers suggested some changes could be coming, and Tucker carved out his spot for some touches when Jordan was hurt early. The rushing numbers didn’t jump off the charts with Tucker, but there were marginal improvements across the board that pushed SU into the middle of the ACC pack in both categories based on week three numbers alone.

The defense is wreaking havoc, despite modest per play numbers

Syracuse’s defensive metrics don’t necessarily stand out on a play-by-play basis. The Orange are middle of the pack in the ACC in success rate and near the top in explosiveness allowed. Where Syracuse’s defense has made its impact, though, is in the metric called havoc.

Havoc is a stat that measures how many negative plays, sacks, tackles for loss and turnovers that a defense has been able to create. Through three games, SU has turned its opponent over 10 times. Led by its ball-hawking secondary, the Orange helped their offense on Saturday by giving good field position and scoring points of their own on a pick-six.

Because of the defense’s havoc, Syracuse has consistently won the field position battle starting with better average field position than its opponents in all three games.

On a per-play basis, SU is ninth in defensive passing success rate in the ACC, but when looking at overall predicted points added, the Orange are top-five in efficiency. Against Georgia Tech, the Orange led the ACC in havoc created by defensive backs, explained by all four of the interceptions.

Special teams is as good as ever

The departure of Sterling Hofrichter left questions at punter entering 2020, and Nolan Cooney has answered them. Cooney has been called on to punt more than every player in the country except one, has punted more times per game than anyone and he still ranks seventh in yards per punt.

Andre Szmyt has missed a couple kicks and hasn’t been able to replicate his Lou Groza award-winning year from 2018, but the Orange have also had improved play out of the kick and punt return units. Johnson returned a kick into GT territory last week and ranks fourth in the nation in average punt return yards.

Through three weeks of the season, the Orange are excelling in two of the three phases of the game, and that may be enough to win them some games approaching on the schedule. But its offense remains statistically the worst it has ever been under head coach Dino Babers.