CHESTNUT HILL, Mass. — Kiara Lewis came off a Kamilla Cardoso ball screen at the top of the key and created separation from her defender, trying to hedge Cardoso’s roll to the basket that repeatedly punished Boston College in the first half.

The move gave SU’s All-ACC guard space to hoist a 3-pointer. She’d already done so 29 times this season, though she’d converted only five. Instead, Lewis found Emily Engstler on the wing. Right as the defense converged on the forward, she floated a pass to a now-wide open Cardoso in the paint for the easy finish.

No. 18 Syracuse (5-1, 2-1 Atlantic Coast) made the extra pass for a better shot numerous times in its 83-70 win over Boston College (4-3, 0-3). Cardoso had a game-high 24 points and shot 90.9% from the field, the second-highest single-game percentage in SU history. The Orange notched 16 assists, the most SU’s had against a Division I team this year, and bounced back from a 92-68 loss to North Carolina that featured a season-low five assists. With Tiana Mangakahia, the program’s all-time assist leader, sidelined with a foot injury, Lewis led the way with a season-high eight assists.

“Kiki’s more comfortable with the ball in her hands,” Syracuse assistant coach Vonn Read said. “She knew the ball was going to be in her hands, so she could kind of pick and choose how to direct the offense.”

In the beginning of the game, that meant feeds inside to Cardoso. The freshman scored the Orange’s first seven points, which came either right below the basket or from the charity stripe because of a shooting foul underneath.

On one possession, Engstler drove from the right wing toward the paint and dumped it off to Cardoso. In one step, the 6-foot-7 center sent Boston College’s Cameron Swartz flying from the left block to the other side of the paint. Cardoso pivoted toward the basket and finished the layup, uncontested.

Another time, Engstler grabbed the offensive rebound and reversed the ball to the right wing, where Lewis ducked it back inside to a cutting Cardoso for another finish and the foul.

“That kid inside, she played out of her mind today, so kudos to Cardoso,” Boston College head coach Joanna Bernabei-McNamee said. “I thought they did just a brilliant job finding her, so great job on Syracuse’s end.” 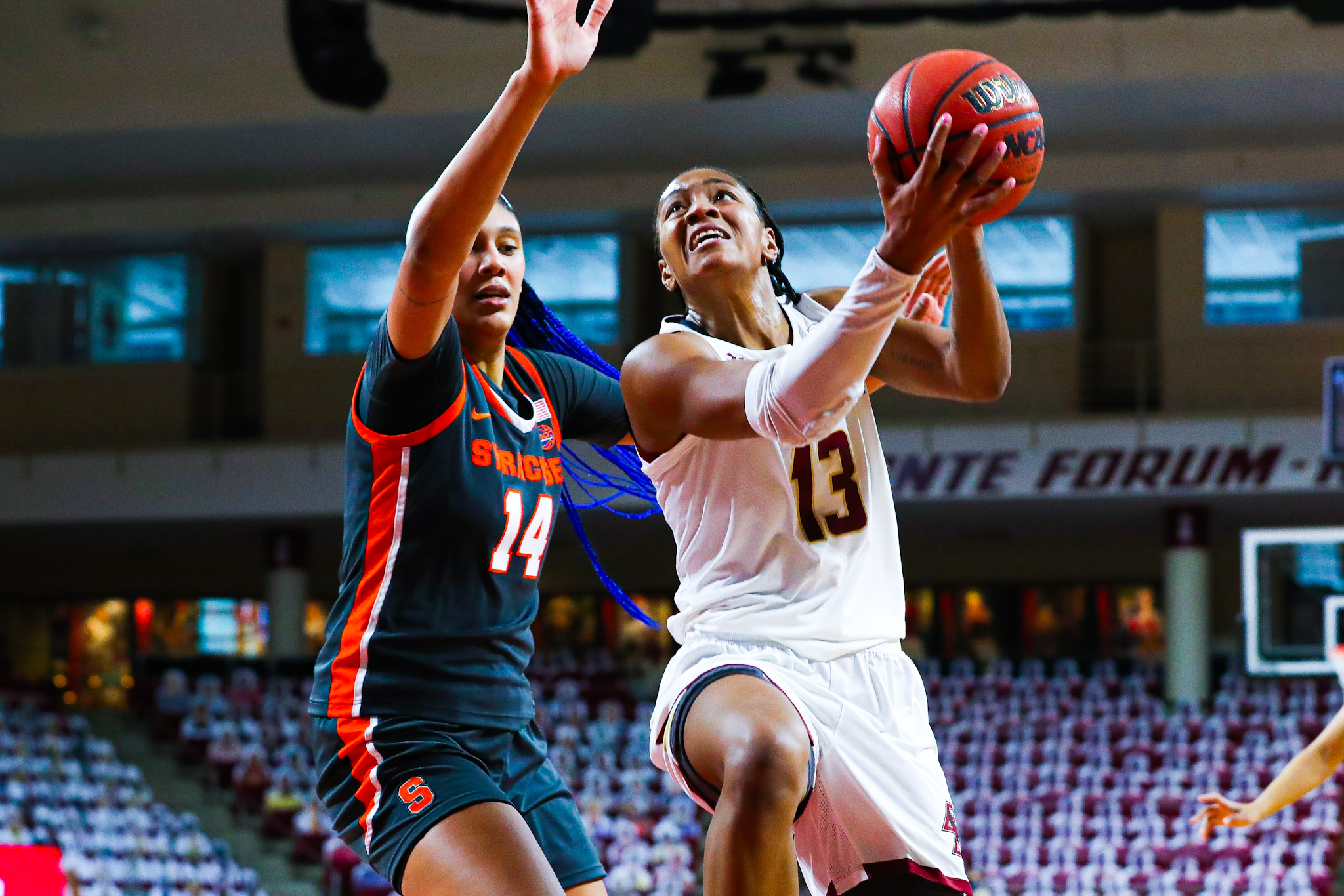 Kamilla Cardoso had a game-high 24 points and shot over 90% from the field. Courtesy of the ACC

Once the Eagles began to overcompensate for Cardoso down low or rolling off screens, others could drive. On two consecutive inbound plays in the first quarter, Lewis lofted it up to Cardoso and wrapped around her teammate for a dribble hand-off. Lewis knifed right to the basket since both defenders remained on Cardoso’s hip. Another time, Taleah Washington caught on the right wing and took two dribbles into open space before shooting an uncontested floater from 10 feet away.

The Orange only shot eight 3-pointers the entire first half and 14 for the game. Heading into Sunday’s matchup, they averaged 24.6 attempts per game and ranked 14th of 15 ACC teams in 3-point shooting percentage. In turn, Syracuse generated high-percentage looks and widened its lead to 16 points by the end of the first quarter and 19 points halfway through the second quarter.

“I thought they did to us what we usually did to them,” Read said. “Turnover margin, and then they got us on offensive rebound margin.”

The Eagles continued to chip away at SU’s second-half lead, making it a nine-point game in the third quarter. They forced 23 Orange turnovers and only gave away the ball 10 times. But time and again, veterans Lewis and Engstler stabilized the Orange and facilitated good scores that kept SU’s lead no fewer than six points since the midway through the first quarter.

Lewis added 20 points to her eight assists, her second game with over 20 points this season.

Engstler played 32 minutes and pulled down a team-high 11 rebounds while dishing out four assists, all season-highs for the junior. She left the game with an injury that occurred away from the play late in the fourth quarter, but she looked “fine,” in the locker room, Read said.