Less than two hours before the 8 p.m. scheduled tipoff, Syracuse Athletics announced a member of the SU men’s basketball program had a positive test for the virus last week. The game went on without sharpshooter Buddy Boeheim, one of the five who was exposed to the virus. Buddy’s quarantine lasts for another seven days, Boeheim said, sidelining him for Syracuse’s next two contests against Rider and Rutgers.

“We have to live with it,” Boeheim said. “We have to get ready each game with whoever’s here.”

Greg Paulus, Niagara’s head coach, said he found out about Syracuse’s positive test moments before the game, when the starting lineups were announced and Buddy was nowhere to be found.

“In this case, Buddy suffers,” Boeheim said. “And I’m not talking as his coach, but I’m his father. He’s home, broken-hearted, because he’s worked his tail off everyday since last season ended, to be on the court. And he hasn’t done anything wrong. He hasn’t tested positive. Yet. He could, but he hasn’t.”

Even without Buddy, Syracuse had no problem handling Niagara. The Purple Eagles, a MAAC team with one of the worst Division I defenses last year, just resumed practice Monday after its own two-week pause. They entered with a 4% win probability, per KenPom.

Despite practicing only three times in the last 20 days because of COVID issues within the program, SU (2-0) never trailed, out-rebounded Niagara by 19 and held the Purple Eagles to 16.7% from 3. Quincy Guerrier dominated, scoring a career-high 23 points on 9-for-10 shooting to go along with a game-high 13 boards in 26 minutes. On the court, it was simple: Syracuse was just bigger, stronger and better than the Purple Eagles (0-1). The circumstances surrounding Syracuse’s 75-45 win, though, are complicated.

There will be basketball tonight in the Carrier Dome. Less than two hours before tipoff vs Niagara, SU announced a member of the team tested positive for COVID-19 from a test last week.

Syracuse has tested players 600 times, which has led to two positives, Boeheim said. The last positive case within the team triggered a two-week pause for the program. After SU’s season-opener, a narrow win over Bryant it played after one day of practice, Boeheim railed against the mandatory 14-day pause regulated by the NCAA. He said something needs to change with the protocol, or “the season will be destroyed.” He reiterated the same sentiment post-Niagara too, citing the CDC’s new changes to quarantine length and a lack of governmental cohesiveness.

But for Syracuse, the difference between that case and this one, Boeheim explained, was that for the first one, the infected player was scrimmaging with other players. This time, the player was standing on the sidelines, and the four players idling near him were his contact-traced group. The Onondaga County medical experts deemed it safe to play this time around due to the nature of the exposure.

For Buddy, it was a matter of minutes on that sideline. Boeheim said the contact tracing technology Syracuse uses logged Buddy at 14 minutes of exposure — one minute fewer than the Atlantic Coast Conference and the NCAA’s limit, but over New York’s guideline of 10 minutes.

Syracuse practiced the day after the Bryant win, then sat out the next three — Sunday, Monday and Tuesday. Though Boeheim said SU’s shooters remain out of rhythm, Syracuse still had plenty of talent to control the game from the opening tip. On one play in the first half, Joe Girard III calmly brought the ball over half court and lofted a pass to a streaking Kadary Richmond, who soared in for an alley-oop layup over a Niagara defender.

Later in the first half, Syracuse went on a 15-0 surge led by Richmond and Guerrier. After Girard missed a transition 3, Guerrier high-pointed a rebound in traffic, took one power dribble with three Niagara defenders draped over him and exploded for an easy bucket.

Guerrier, who said he’s about 90% healthy after offseason groin surgery, was the biggest beneficiary of Bourama Sidibe’s (torn meniscus) absence. The sophomore started at power forward — a more natural position for him at the moment — and was a monster on the boards at both ends.

Syracuse led 42-28 at halftime, and a 12-2 run to open the second half removed any residual doubt. SU turned up the defense with its lead, holding Niagara to 17 second half points on 1-for-12 from beyond the arc. 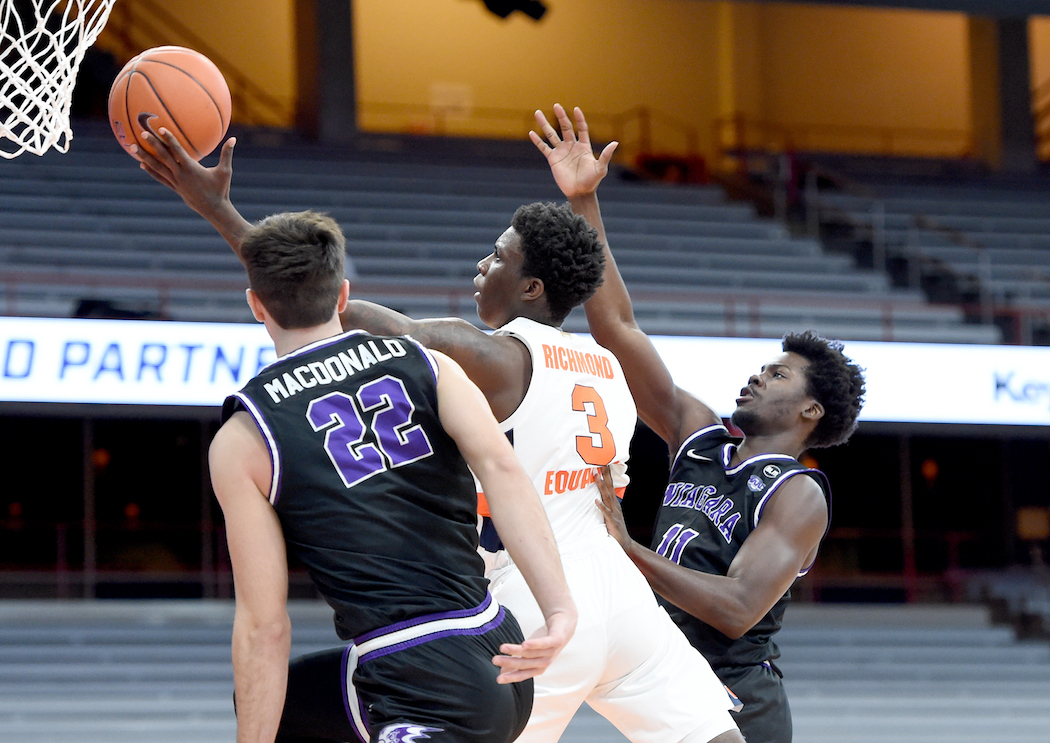 Every Syracuse player present touched the court. Richmond was extremely solid, playing under control in his first career start. Freshman Woody Newton got his first career points at SU, a catch-and-shoot 3 from the right wing. To push Syracuse’s lead to 30 points late in the game, Richmond picked up a loose ball and found Newton for an alley-oop slam.

Robert Braswell struggled at forward, Jesse Edwards was the first true center off the bench and John Bol Ajak got some run in the second half. But it was far from the whole roster.

Only 10 SU players warmed up and attended Thursday’s game. Buddy and Chaz Owens were the only scholarship players out, but Arthur Cordes, Shane Feldman, Jaylen Bartley, Nick Giancola and Chris LaValle were also all missing.

The ACC’s coronavirus policy requires anyone identified through contact tracing to quarantine for 14 days. It defines tracing as contact within six feet of an infected person for at least 15 minutes. It’s likely Syracuse’s wearable contact tracing technology that played a role in determining who was or wasn’t exposed. The goal is to avoid a teamwide shutdown, and the technology the team wears from the moment they step into practice until they exit the facility could’ve been the difference.

“These chips tell you exactly how many minutes at the end of practice you were next to someone,” Boeheim said. “You could be 10-15 minutes, but you might be four or five. At least it gives us an opportunity, like tonight, to play. You don’t just blanket say the whole team’s out for 14 days.”

As the time ran out on the game clock in Thursday’s 30-point blowout, Syracuse closed with a lineup of Richmond, Newton, Braswell, Bol Ajak and Frank Anselem. The walk-ons who normally would’ve dribbled out the clock weren’t in the building.

“It doesn’t matter what happens in life, you’ve got to get ready for the next day,” Boeheim said. “Simple as that. Whether we have more tests or don’t, we just have to get ready and go play.”

The post Syracuse coasts to 75-45 win over Niagara after walk-on gets COVID-19 appeared first on The Daily Orange.