Joseph Girard III stepped into a feed from Kadary Richmond after racing toward the top of the key, up past a Jesse Edwards screen and near the spot he’d previously hit so many 3-pointers from. It was the 2:09 mark in the first half, and Syracuse’s lead over Rider was already at 20 and threatening to expand when Girard flicked his right hand after elevating.

Through the Orange’s opening two games, he’d scored just 14 points and hit just three 3-pointers. It was a stark difference from the freshman season in which he earned the starting point guard role after one game. But his fourth 3-pointer in Saturday’s first half — where he rediscovered his stroke — gave the Orange their 12th make of the game from long range, a number they reached just 11 times the past two seasons.

Syracuse (3-0) torched Rider (0-1) from beyond the arc and from inside it while en route to an 87-52 win on Saturday, shooting 54.9% and tying a program record for made 3-pointers (15). Alan Griffin led SU with 23 points, Girard added 21 and the Orange cruised past the Broncs, just like they were supposed to, to secure their first 3-0 start since 2017.

Winning their first three games this year, something the Orange have done 33 times under head coach Jim Boeheim, might’ve been tougher for SU than the previous 32. There were still the lowly nonconference opponents, the Riders and the Niagaras, that faded away early-season scares, such as Nov. 27 at Bryant. But everything else — the bizarre twists and turns that come with playing college basketball during a pandemic — provided the obstacles.

Syracuse paused from Nov. 15 to Nov. 26 after Boeheim and a player tested positive for COVID-19. The team then started back up and lost its center, Bourama Sidibe, five minutes into the opener. Another positive test within the program followed, this time from a walk-on, forcing starting shooting guard Buddy Boeheim into quarantine.

The Orange had two starting spots open and only four practice days completed. Somebody had to plug those gaps against Niagara, and over the course of the 40-minute blowout, solutions surfaced: Richmond started his first collegiate game and scored 16 points. Marek Dolezaj slid to center, a spot he’ll fill at least until Sidibe can return from a torn meniscus. And Woody Newton provided a spark off the bench in his 14 minutes.

“It can happen to anyone, and everyone has to be ready,” Quincy Guerrier said after the Niagara win. “It’s probably going to be like that the whole season.”

Still, Rider wasn’t and shouldn’t have been the challenge for Syracuse. That’ll come in three days, when the Orange travel to Piscataway, New Jersey and face No. 24 Rutgers. After a Richmond 3-pointer on the first possession was followed by a Griffin catch-and-shoot 3 on the next offensive sequence, SU started making shots at a pace the Broncs couldn’t match.

The Broncs have graduated their top five scorers, who made up 87.6% of their scoring. Christian Ings, their leading returning scorer, averaged just 4.9 points per game last year. A pause due to COVID-19 also eliminated valuable practice time before the season, and the team’s mistakes throughout Saturday reflected that it was the season-opener for a rebuilding program.

Syracuse’s zone defense trapped the Broncs in the corners, with Richmond sliding down often to take away the first pass out of those traps. Even when they broke the press — like Ajiri Ogemuno-Johnson did when he cut through the paint in the first half — they missed open layups that led to SU opportunities in transition. 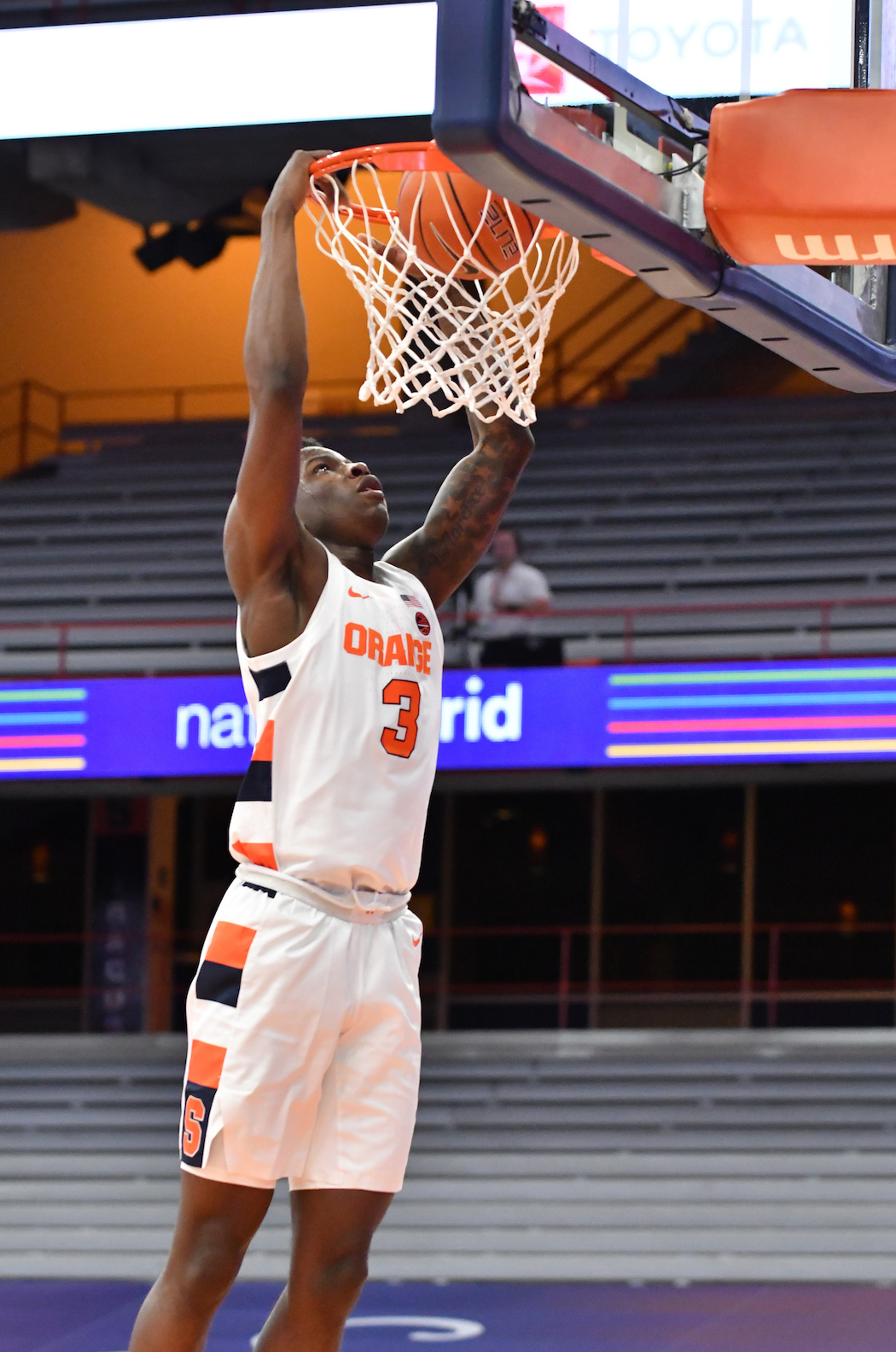 On offense, Richmond helped facilitate 3s in addition to his make on the first possession. Four minutes before Girard hit Syracuse’s final 3-pointer of the first half, Richmond raced in transition but started to lose control as he reached Rider’s paint. Newton stood open on the opposite wing, and Richmond recovered enough against the porous Rider defense to kick it out. Newton sank the 3-pointer.

As the second half opened, the Orange started 0-5 from behind the arc and reverted to its traditional methods of scoring: 2s from Dolezaj near the basket, a layup from Griffin, drives from Girard that resulted in fouls and made free throws. They slowed the pace down, finished possessions in the paint and didn’t push the transition-3 as much. But Girard’s two makes, including one wide-open look out on the break, inched it closer to the program’s all-time record.

Through three games, the puzzle pieces Syracuse has to work with in the most obscure and most complicated of seasons have slowly started to emerge, and the rotation options have slowly started to take shape. It found different options to score, different methods to manufacture points and win. The first one was the comeback against Bryant. Then, Guerrier paced the offense behind his 16.3 points per game average.

Saturday’s barrage of 3-pointers came without Buddy, SU’s best shooter beyond the arc. And with it came the emergence, and re-emergence, of key ingredients the Orange need going forward.