Behind the bar counter at Middle Ages Brewing Company, owner Isaac Rubenstein walked by a line of 23 beer taps. Attached to 22 are wooden handles, engraved at the top with the Middle Ages logo and a unique emblem, along with the name of each craft. But about two-thirds of the way down is a larger, orange handle with “Syracuse” spelled out vertically, distinguishing it from the rest.

That tap pours Syracuse Pale Ale, Middle Ages’ top seller. The English-style pale ale is accessible to everyone, Rubenstein said, because it’s not too “hoppy” — hops are one of the main ingredients that give beer a bitter taste. Middle Ages’ created the ale in 1998 as a “Syracuse team beer” for SU fans.

The orange handles are also recognizable two miles away, at the Carrier Dome. Syracuse Pale Ale is available on-tap at more than a third of the Dome’s concession stands and draws both avid beer drinkers and those new to craft beer, Rubenstein said.

“People see the bright orange Syracuse tap handle, and they like the beer, (so) they seek us out,” Rubenstein said.

Without fans in the Dome this football season, and potentially this basketball season, local breweries such as Middle Ages and Buried Acorn Brewing Company are among the many local businesses losing game day revenue. For Rubenstein and Tim Shore, co-founder of Buried Acorn, the Dome is only responsible for less than 5% of sales. But game day is still very significant for business.

The Dome provides product exposure unlike any venue, Shore and Rubenstein said. Hundreds of thousands of people attend games every year, so it’s not just about the sales from that specific game day. Fans try the beer in the Dome, “and then they get excited for the brand,” Shore said. That leads to future sales.

“We have that exposure in the Dome, and that’s awesome, but right now, I can’t think of any way to make up for that,” Rubenstein said. 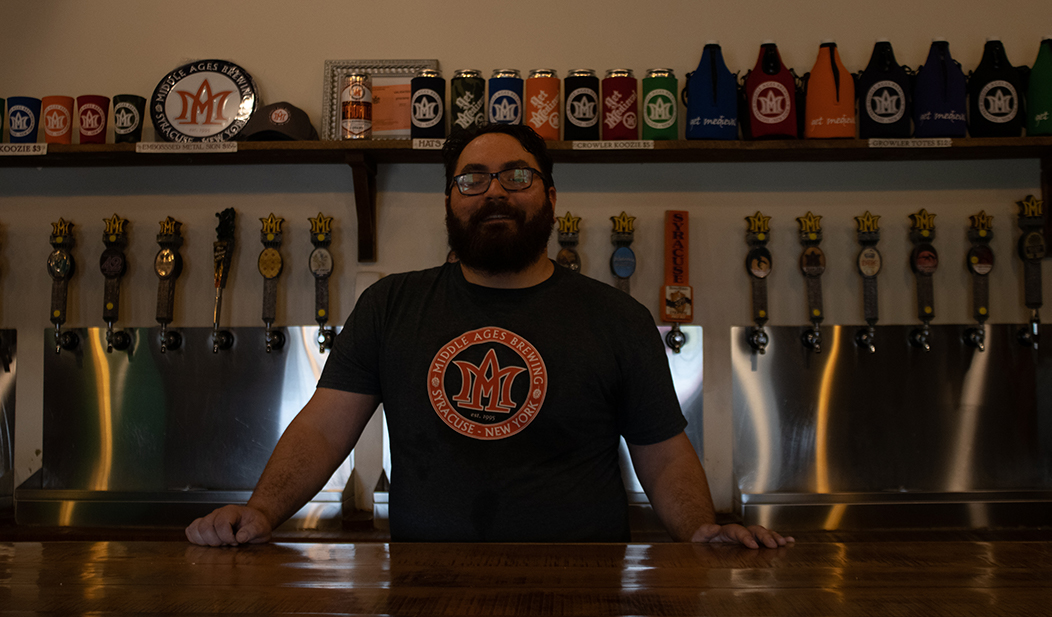 For Isaac Rubenstein, an owner of Middle Ages Brewing Company, beer sales in the Carrier Dome generate tens of thousands of dollars worth of revenue. Anya Wijeweera | Staff Photographer

A brewery closed its doors in the United States almost everyday in 2019, according to the Brewers Association, a U.S. trade organization for brewery companies and employees. Despite a record 8,000-plus craft breweries in business last year and a boom in the industry over recent years, the coronavirus will exacerbate the number of breweries closing, said Torrey Grant, a professor in Falk College who teaches SU’s wine and beer appreciation course.

Middle Ages’ sales are down — the Dome accounted for tens of thousands of dollars — but the brewery is surviving, Rubenstein said. So is Buried Acorn, founded two years ago. Still, the exposure from swaths of fans who come to Syracuse for sports games is a challenge to replicate.

Founded in 1995, Middle Ages is Syracuse’s first ever standalone brewery, and a place that away fans or those new in town used to seek out. Off-site events like the New York State Fair and the Inner Harbor Wing Fest were also good for business, Rubenstein and Shore said.

But during the height of New York state’s lockdown, those events were canceled. Buried Acorn shifted its focus toward delivery and pickup without the usual volume of wholesale orders it normally depends on for revenue. That change required increased advertising — through Facebook, Syracuse’s 95X FM radio station and television commercials — to inform customers of those changes.

“People don’t know that you can deliver beer,” Shore said.

Innovative marketing will help draw in both new and returning customers and inform them of new seating plans, he said. Breweries could even market a 2020-coronavirus-year barrel using unsold beer, one aged for a longer period of time, Grant said.

“(Breweries) are going to have to get really creative with how they market themselves after this,” Grant said.

For Middle Ages, the lockdown also meant three months of home deliveries and pickups. The process “blew my mind how much beer we were going through,” Rubenstein said. That didn’t make up for the beer typically sold by-glass in the taproom — the highest profit margin for a brewery — but the success was likely because customers felt safer buying from Middle Ages than at a crowded grocery store like Wegmans, Rubenstein said.

Middle Ages produces 5,000 to 6,000 barrels during a normal year. Rubenstein estimates the number might be closer to 4,500 this year, but he admitted he doesn’t want to look closely at the numbers. Buried Acorn also makes a couple thousand barrels per year.

“Beer is kind of recession-proof,” Rubenstein said. “(If) somebody can’t afford to buy a new car or the renovations on their house, cause they lost their job, they’re still going to spend a couple extra bucks to buy the beer they like instead of switching to the cheap brands. It’s something that makes them feel normal… In that way, we have that going for us.” 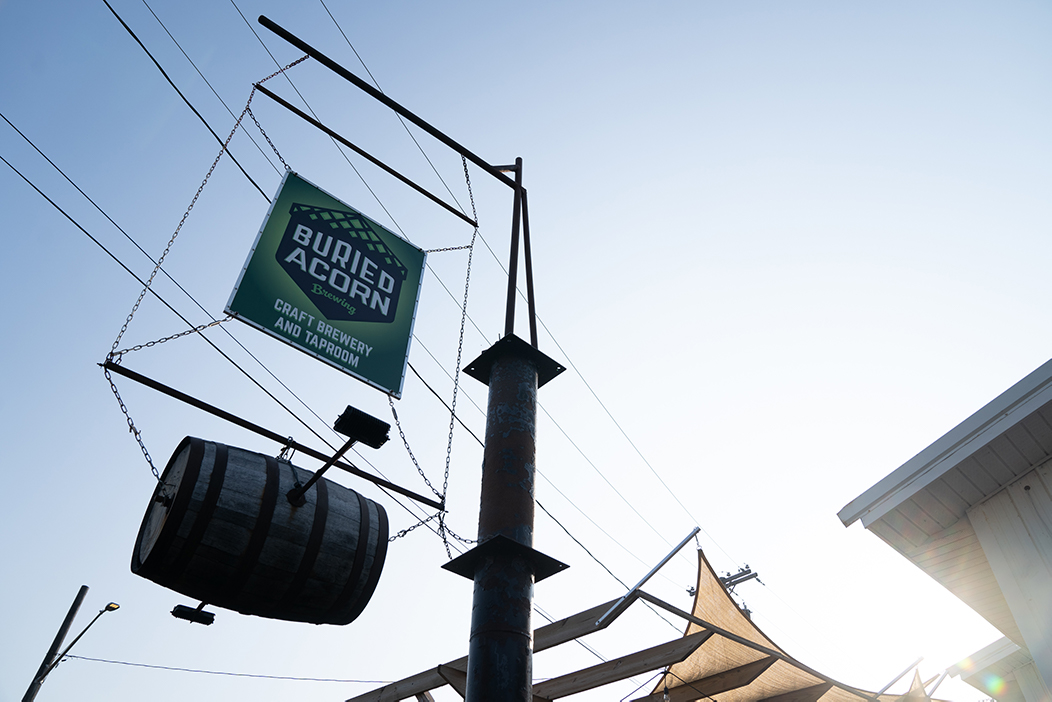 Buried Acorn Brewing Company shifted toward deliveries and shipments during the height of the pandemic. Now, they have outdoor seating and will open a limited indoor seating section within a few weeks. Emily Steinberger | Photo Editor

Months without business from restaurants and bars forced Buried Acorn and Middle Ages to convert nearly all their draft beer to cans and bottles. The problem is that cans and bottles require brewers to cover costs for packaging, labeling and transportation, all of which are more expensive than kegs. Consumers aren’t willing to pay $8 for a can of beer when they can get a pint on draft for $5, forcing brewers to cover those additional costs.

“Not only do I make less money, everybody makes less money,” Rubenstein said of cans.

The industry’s aluminum can shortage also doesn’t help, Grant, Shore and Rubenstein said. Middle Ages does both canning and bottling, and the brewery was forced to convert only its draft beer —  50% of its total — to a packaged product, Rubenstein said. But for Shore and Buried Acorn, who now almost exclusively do cans, far more beer that previously went out in kegs now has to be canned.

Getting cans is a week-to-week process, Shore said. Every week he asks for three pallets of cans, which amounts to about 26,000, but that’s not enough. The manufacturers simply can’t make them faster, he said, because breweries and other beverage makers across the country are running into the same issue.

As Syracuse kicked off its home-opener against Georgia Tech on Sept. 26, Rubenstein strolled through the back door of the Middle Ages’, past the fermentation vessels and into the refrigerated storage space. He dragged open the sliding doors, revealing the orange, red and yellow cases of beer stacked on pallets and piled up to the ceiling and shiny metal kegs stacked one on top of another. There was room to walk in — Rubenstein estimated the space was about a little more than half full.

“Our sales are down overall, due to COVID, (but) they’re not as down as they could be in dire situations,” Rubenstein said. 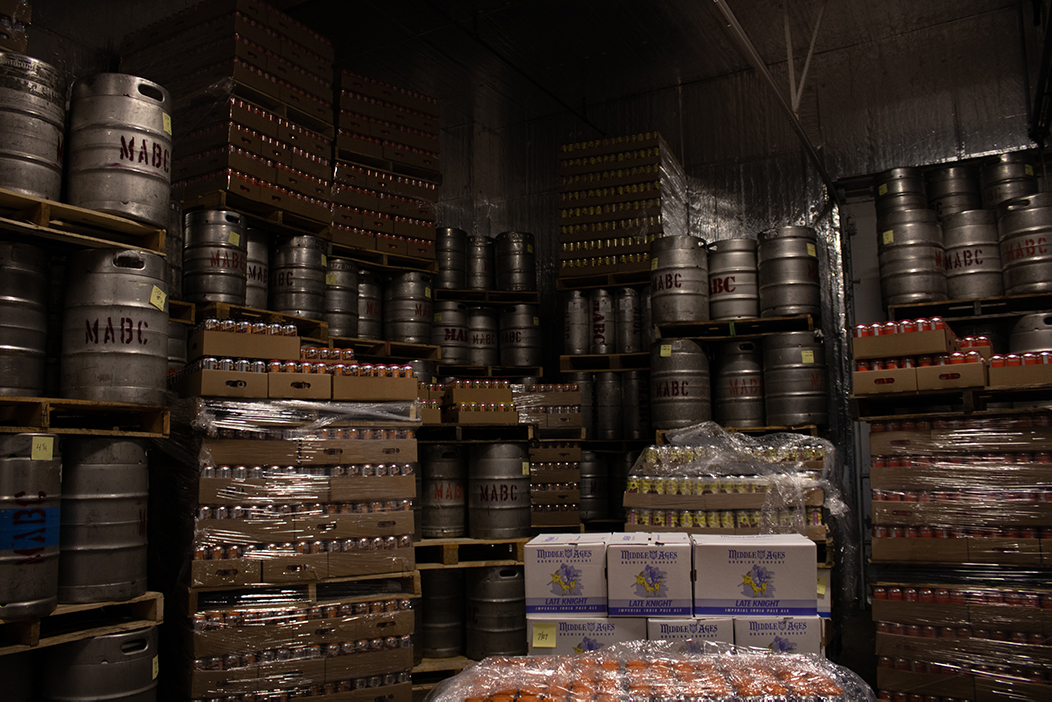 The day before, five minutes down the road, Shore walked through his brewroom to open the back garage door. He knew a pallet of cans was arriving later that afternoon, and he wanted to make sure there wasn’t any confusion. His current inventory of cans was growing low, the pallet reaching waist height as opposed to its usual nine feet.

The room smelled bad to Shore — a result of the previous day’s fermentation — as he searched for a burner to use for a batch of inverse sugar for that day’s Belgian beer. Outdoor seating had been open for weeks, and indoor seating will open to a limited number of customers within a few weeks. Buried Acorn produced 1,000 barrels in September, Shore said.

There’s still a chance fans can fill the Carrier Dome in some capacity this fall. Still a chance that current customers, or maybe new ones, will see the orange handle representing Middle Ages’ Syracuse Pale Ale behind the concession stand counter.

But right now, for both Rubenstein and Shore, there isn’t a whole lot to complain about.