On the possession after Syracuse’s 11th missed 3-pointer of the game, Clemson’s Gabby Elliott missed a 3-pointer of her own, and Christianna Carr collected the rebound off the front of the rim. She immediately launched a pass to Chrislyn Carr, igniting the fast break. Chrislyn carried the ball into the right corner and fed it out to the top of the arc for Najé Murray, who hit her first 3 of the game at the halfway point of the second quarter, pulling the Orange within one point of Clemson.

Twenty seconds later, Murray hit another 3-pointer from the top left side of the arc on a similar pass from Chrislyn. Then Chrislyn sunk a 3 of her own, capping off a crucial 9-0 run in just a 61 second span. Her shot was taken from the same spot as Murray’s, but Chrislyn lined up hers and faked her defender out of the way with an abrupt pause before firing.

“They were playing hard (but) we were just kind of forcing it and not necessarily sharing the ball,” acting head coach Vonn Read said. “From the second quarter on we started sharing the ball.”

Syracuse missed 10 of its 11 3-pointers in the first quarter, uncharacteristic for an Orange team that entered the game shooting 35.1% from beyond the arc, the 55th-best mark in the country, per Her Hoop Stats. Luckily for SU, though, Clemson ranked 347th in that category and made only one 3 pointer in the opening 10 minutes, shooting 27.8% from the field. SU led by one after the first ten minutes.

Ten of Syracuse’s 13 missed shots were 3-pointers, many of them forced, Read said. On Syracuse’s fifth and sixth misses from deep in the first quarter, Murray and Christianna launched consecutive air balls.

But in the second quarter, the Orange settled down, reverting to their successful shot variety that has aided them to a strong stretch of wins since the Battle 4 Atlantis Tournament. They only attempted seven 3s, but this time four went in to close out the quarter. 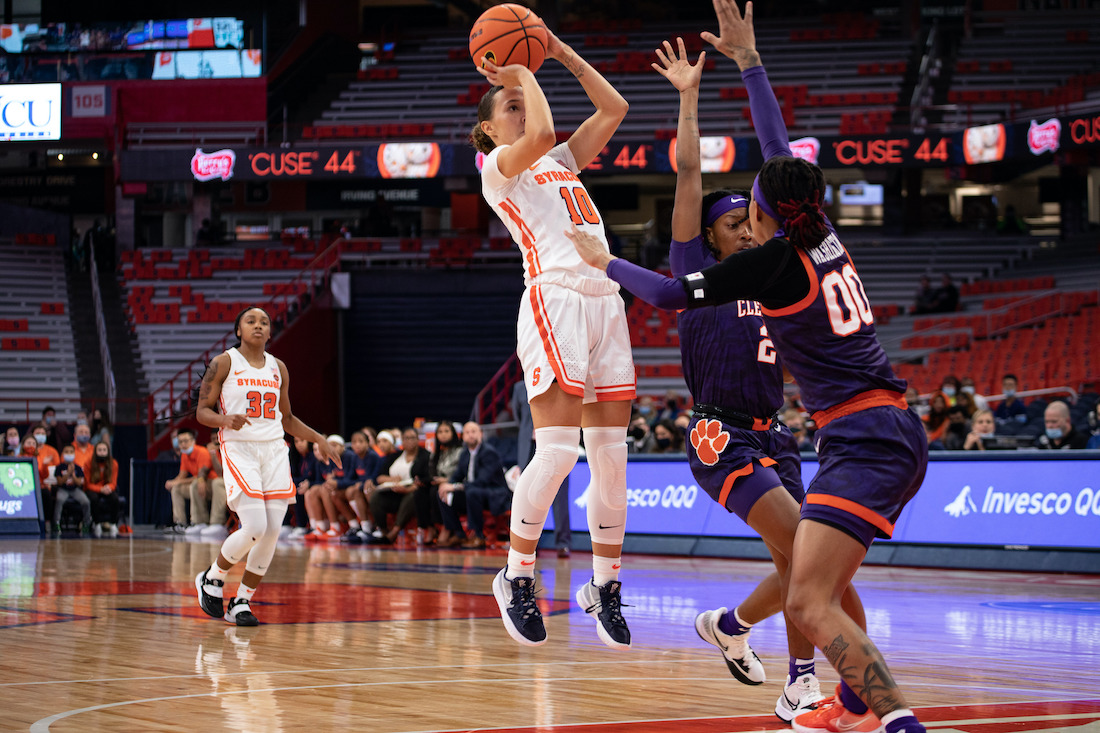 “(Read’s) talk at halftime was more like ‘Hey these shots are going to come, we’re going to make them,’” Christianna said. “That was the talk on the court, too. Our main focus was being able to come out in the third quarter and punch first.”

And that’s exactly the kind of pressure SU brought out of the break. Syracuse went 6-for-6 from the field and led 40-27 at the half. The Orange continued that success into the third quarter as they made five of their first six field goal attempts. Murray picked up where she left off before the break, shooting 4-for-7 from the field and ending the quarter with a team-high 21 points after just one point in the first quarter.

Murray was routinely posted up along the top of the arc, where she sunk her third 3 of the game late in the third quarter. The ball was quickly worked around from the right corner to Murray at the top of the left side of the arc, and she extended SU’s lead to 16 points.

But what spared Syracuse early on was Clemson’s 15 first-half turnovers, more than the Orange had generated in seven full games this season. The Tigers conceded 23 turnovers, which led to 31 Syracuse points.

After Delicia Washington’s long outlet pass was batted away late in the first quarter, it rolled right to Chrsitianna, who sat deep in the zone. She slowly dribbled the ball out of Syracuse’s end and made her way up to the top of the zone before passing the ball to Teisha Hyman in the right corner. Hyman passed it back to her as she sunk a stepback 3 pointer — Syracuse’s first — to give the Orange a five-point lead.

Going into ACC play, Syracuse’s depth off the bench was going to be one of its main concerns. After Priscilla Williams announced she would redshirt the rest of the season, the Orange were left with just 11 active players. And for the past three games, SU has been forced to rotate nine players with Jayla Thornton and Eboni Walker sidelined with injuries.

Read said SU can’t beat ACC teams with limited options off the bench, but having each of his available players contribute during the bulk of Syracuse’s schedule is just what the team needs, he said.

It was an important win for the Orange, who are now 1-1 in ACC play after a blowout loss against No. 22 Notre Dame in their second game of the season. Syracuse’s 40-point win over Clemson cemented a five-game win-streak, showcasing what Read said he believes has been a dramatic improvement since its loss to the Fighting Irish.

“Totally different team. Same players, but just a connection,” Read said. “These players are connected. We have chemistry but we can’t use that as an excuse anymore. You’re not playing this type of basketball if you don’t have chemistry, so they’ve found it.”

The post Syracuse bounces back from poor 1st quarter to blowout Clemson, 86-46 appeared first on The Daily Orange.