Syracuse advanced to the second round of the NCAA tournament in 2019 after earning an at-large bid, but the team was eliminated in a 2-1 loss to No. 16 St. John’s. The Orange struggled to string together consistent results, evident in their 2-4-2 conference record.

Due to the Atlantic Coast Conference’s coronavirus schedule adjustments for 2020, Syracuse will play a shortened schedule with a minimum of six conference games.

Here’s a complete breakdown of the Orange’s 2020 roster:

The biggest question heading into the season is who will emerge as the Orange’s main offensive threat. Gone is All-ACC first-team forward Ryan Raposo, who was selected 4th overall in the MLS SuperDraft. Gone is attacking midfielder Massimo Ferrin, who played as SU’s second forward. And gone is forward Severin Soerlie, who graduated last year. 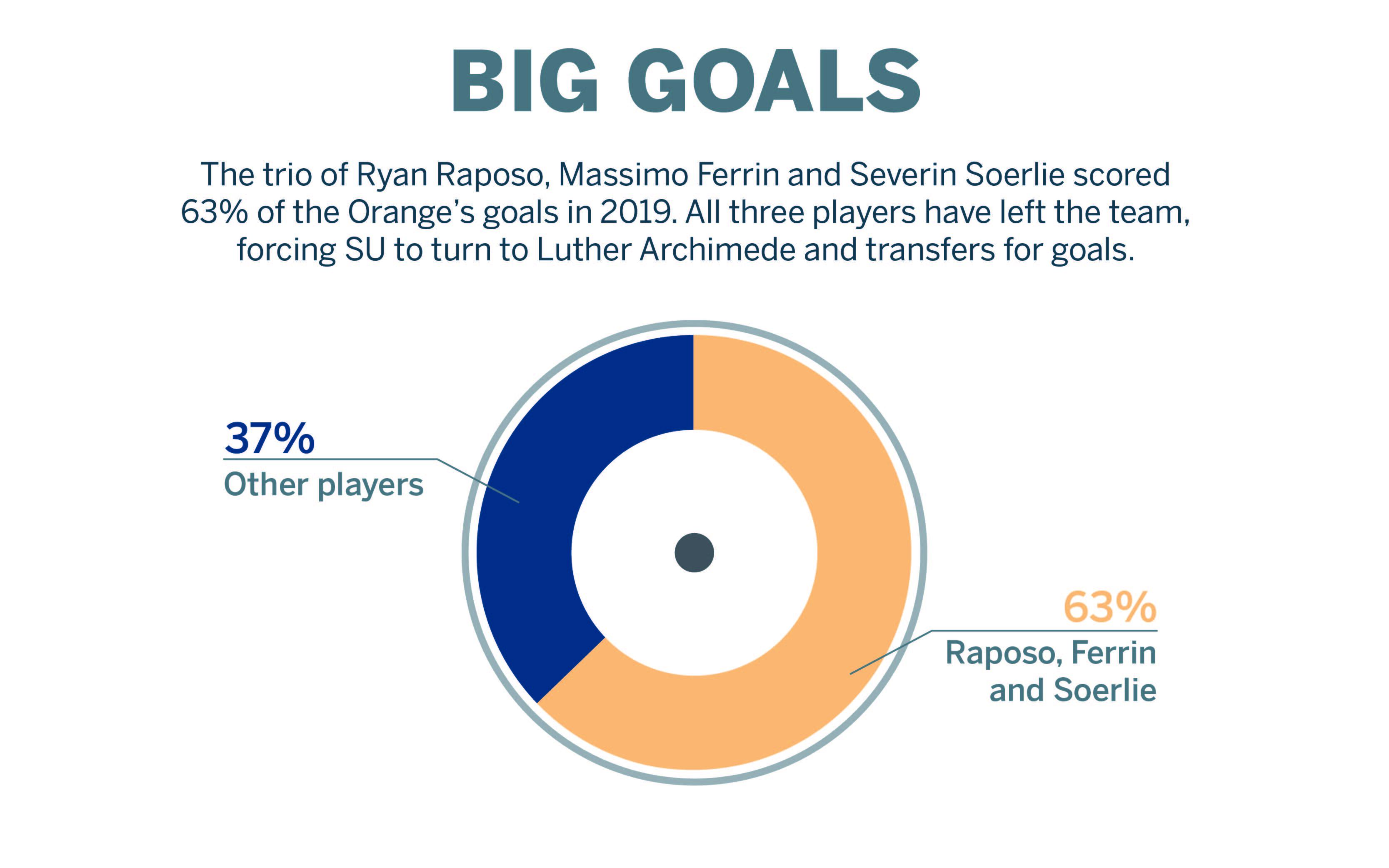 There will be significant turnover in the backline, too. If Syracuse continues to play its 3-5-2 formation, it will have to replace two of its starting defenders, wingback John-Austin Ricks and center back Nyal Higgins. Toronto FC selected Higgins as 19th overall in the MLS SuperDraft. Rotational defender Matt Orr and midfielder Brian Hawkins have also graduated.

Sophomore forward Luther Archimede should be first in line to replace Raposo, but he’ll have to improve his scoring output and refrain from earning red cards. He only had two more goals (4) than red cards (2) last season.

In midfield, the Orange have a lot of continuity outside of Ferrin. Versatile midfielder Hilli Goldhar, who mainly played at left wing in 2019, returns alongside fellow starters Amferny Sinclair — the NCAA’s 2019 leader in yellow cards — Julio Fulcar and Simon Triantafillou.

Center back Sondre Norheim returns for his senior season with senior Dylan McDonald and sophomore Noah Singelmann. Starting keeper Christian Miesch, who kept five clean sheets in the regular season, will be in goal for Syracuse in 2020.

Along with its annual recruiting class, Syracuse has replenished its squad with seven transfers, three of whom are graduate students.

The Orange added other attacking options with transfers Roque Viegas (Monroe College) and Manel Busquets (Duquesne). Viegas recorded 14 goals and 12 assists with Monroe in 2019, while Busquets was an All-Atlantic 10 first-team selection last season.

SU head coach Ian McIntyre needs to replace the scoring of Raposo and Ferrin, and he’ll likely rely on Archimede, McDonnell, Viegas and Busquets to share the goal-scoring burden. Any contributions from Kerr, a freshman, would be a bonus.

Improvement from set pieces, alongside more goals from midfield, could help alleviate any early growing pains with Archimede, the only forward returning from 2019.

Still, with a largely unchanged midfield and defense, Syracuse will likely be a solid, if unspectacular offensively, team in 2020.